Wilma Mankiller’s story is brought to life by an Oklahoma City illustrator in Wilma’s Way Home. 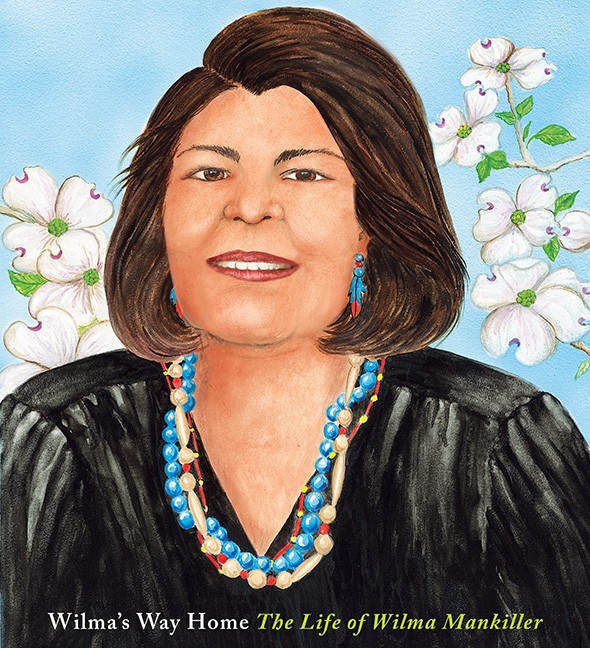 Native Americans stormed the beaches of Alcatraz Island in 1969 to claim the notorious prison for the “Indians of all tribes.” For nineteen months, the shuttered federal facilities were reopened by the activists and turned into homes. They hoped to force the U.S. government to make good on the Treaty of Ft. Laramie that promised to return all retired federal lands to the native people who once occupied the area. Wilma Mankiller was one of the volunteers trying to keep the dream alive, an early step in her long career of advocacy for Native American communities.

Mankiller’s landmark achievement was to become the first elected female principal chief of the Cherokee Nation, but that is just one aspect of her fascinating life to be explored by countless books and her own autobiography, Mankiller: A Chief and Her People. Disney Hyperion has also recently released Wilma’s Way Home, a children’s book written by Doreen Rappaport and illustrated by Oklahoma City artist Linda Kukuk.

Kukuk, a member of the Choctaw Nation, said this is her first children’s book and the project came “out of the blue” when an editor from Disney reached out online.

“They said, ‘We are doing this book and feel like it is very important that we get an illustration partner that is right. We think that is you,’” Kukuk said. “When I looked into the other books in the series, it seemed like Disney tries to make a connection between the subject in the book and the illustrator.”

Kukuk will sometimes explore Native themes within her watercolor and scratchboard art and exhibits regularly in Native-focused art shows. Kukuk’s editor sent her a collage of images from Kukuk’s own website to guide the style for her illustrations. Though Kukuk was already familiar with Mankiller, she began consuming every book she could find about Mankiller’s life and recognizing parallels between their lives. Kukuk’s experience as chief of the Commander’s Protocol Office at Tinker Air Force Base helped her appreciate Mankiller’s deft ability to inspire and coordinate people to get large projects done. Kukuk’s extended family also gave her insight into what Mankiller’s childhood looked like.

“When I went to visit my aunts and uncles in southeastern Oklahoma, they lived exactly as Wilma did,” Kukuk said. “No running water, outdoor plumbing, get your water from a spring, cook on a wood-burning stove. I thought it was fun when I was a kid, but I imagine in the wintertime, it wouldn’t be.”

Kukuk made trips to Mankiller Flats to talk to the people who knew Mankiller best.

“One of the things that I noticed was everyone I talked to, without fail, believed they were Wilma’s best friend,” Kukuk said. “That told me a lot about her character, how she was a very warm person and embraced everyone that she met.”

Mankiller’s early life is an all-too-familiar story of cultural disruption faced by many Native Americans in the 20th century. Her parents attempted to squeeze a life for their family of 11 out of the difficult farmlands of Mankiller Flats near Rocky Mountain. Struggling to keep the family fed, Mankiller’s parents volunteered to move as part of the Indian Relocation Act of 1956 that took hundreds of thousands of other Native peoples from reservations to cities, with many landing in and around San Francisco along with the Mankillers. 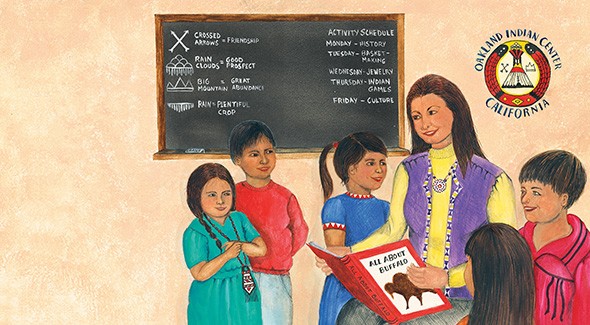 Wilma’s Way Home documents Mankiller’s struggles that began the moment they entered the chaos of a modern American city. That sense of displacement lasted throughout her early adulthood as she strived to find ways to connect to her culture. Eventually, she connected with a Native American center in the Bay Area.

“The militants, the wise elders, the keepers of the medicine, the storytellers — were my best teachers,” the book quotes Mankiller about her time at the Native American center. “I felt like a newborn whose eyes have just opened to the first light.”

For those curious about reading more about the long-term impacts of relocation on Native culture, Tommy Orange’s brilliant novel about Native Americans in Oakland, There There, focuses on that crisis of identity, including a glimpse into the living conditions of families that occupied Alcatraz Island.

With a renewed spirit, Mankiller packed up her daughters and returned to Oklahoma, where she would begin her historic rise through the Cherokee Nation despite tremendous odds.

“Her perseverance was amazing,” Kukuk said. “She had a terrible auto accident that killed one of her best friends who was in the other car. They didn’t think she would walk, but she came back from that. She had to have a kidney transplant, then another one, then she got cancer, but she just kept going and doing.”

Wilma’s Way Home features some traditional Cherokee words, including gadugi (gah-DOO-gee), which is defined as “the philosophy of people helping each other,” sprinkled in with pronunciation guides. Kukuk believes this is a foundational idea Mankiller tapped into that helped transform the tribe.

“Women can help turn the world right-side up,” Mankiller is quoted within the book. “We bring a more collaborative approach to government.”

“She almost single-handedly got the Cherokee people to stop waiting for the government to do things for them and to do things for themselves,” Kukuk said. “She was one of those unusual and amazing people. I felt her presence helping me through this project. I never knew her but now feel like she is my best friend.”