The Brew Shop has been around for more than a quarter-century now, supplying much of the craft brew to taproom pipeline that has evolved in recent years.

Gail Shore had never brewed a beer until the year before she decided to take over The Brew Shop, but she’s still slinging hops and yeast more than a decade later.


“It was actually opened in 1995. So this is our 26th year. Personally, I bought it in 2010. So this is my 12th year. But it's been around the longest of any in Oklahoma for sure. Most of the other ones have come and gone,” Shore said.


The former owner was planning to move to Colorado and Shore was looking for a new venture, so she learned the business and how to brew and then took over ownership.


The learning curve for craft brew batches isn’t as steep as you might think. The basic equipment and your first batch of ingredients can be bought for between $150 and $200, Shore said.


For first-time brewers, Shore offers these tips: one, use your imagination; two, maintain temperature control; and three, take copious notes.

“The easiest thing to brew would be like a wheat beer. It's a real simple recipe. It takes two weeks to ferment, two weeks to carbonate, and you’ve got your wheat beer ready in four weeks. Just real simple. Not a lot of hops. On the other side, some of the Belgians are more challenging. There's more ingredients. You have to wait a little longer for fermentation to finish. If they're high in alcohol, you have to be careful about carbonation and things like that, so they would probably be on the other end of the spectrum. And then there's lagers, which are cold fermented. And so whenever you ferment at a cold temperature, the yeast takes longer to eat the sugar to produce the alcohol. So the lagers are typically six to eight weeks. So it's not that it's more difficult, but you have to have good temperature control in the 50s. And then you also have to wait,” Shore said. “As you're doing it, as with most hobbies, you learn as you go along. If you have those basic things down, then it makes it a whole lot easier. A lot of it is fine-tuning taste to your flavor preference.


Both fortunately and unfortunately, Shore said many of her customers have gone on to start breweries of their own. Roughtail, Lively, Core4, OK Cider, Skydance and several others are among the OKC Brew Shop alumni.


But the shop isn’t the only nexus for Oklahoma City brewers that Shore is involved in. She was one of the founders of Red Earth Brewers, a grassroots collective of home brewers that now numbers nearly 100 people.

Nicholas Hodge started brewing in 2011 and became a member of Red Earth Brewers in 2014 after meeting some other members at ZooBrew. He is currently serving his second term as club president.


“I've seen some pretty big changes. They changed the law to where taprooms could serve on premises, and then the higher alcohol content change. Home brewing was the scene, man. That's where everybody was brewing the beers you couldn't get here in Oklahoma unless you were willing to travel to Texas or whatever,” he said.


Hodge said the club took a bit of an attendance hit during the pandemic but said that they are expecting their largest ever spring brew-off this year. 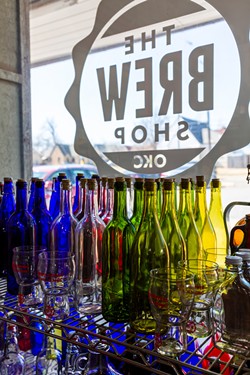 Red Earth Brewers meets on the third Thursday of every month as a club and also does a happy hour the first Thursday of the month. Dues are $30 for the year, or $15 if you join after June, Hodge said.


Aside from the friendly club competition, Shore said she helped organize another new event in Guthrie last year called Hoppy Camper. The second one will be held April 30.


“The whole thing is a fundraiser for people of all ages with disabilities to go to this camp that's in Guthrie called the Central Oklahoma Camp and Conference Center. And so this is a huge fundraising event that last year, we made $12,000, to give to these people to be able to come to this wonderful camp in Guthrie. And so we're doing it again this year,” Shore said.


“I highly suggest joining a club and then always entering competitions will help better your beer. I think that we have some of the best judges that give some of the greatest feedback right here in this state. I know many brewers who have just gotten way better very fast after joining the club and getting into it, he said.