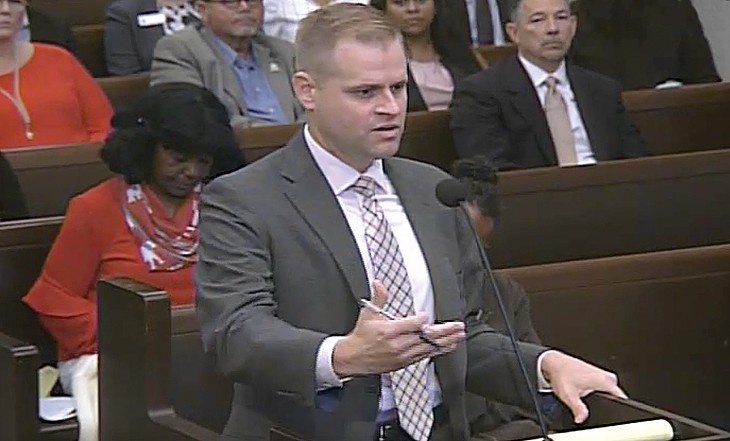 Oklahoma City council members addressed issues of home-sharing Sept. 25 amid a crowd of advocates and adversaries.

“Our concern is neighborhood instability that would be created by too many or the wrong kind of home-sharing arrangements in our neighborhoods,” Suzanne Broadbent said.

Broadbent is a Putnam Heights resident who asked the council to add Putnam Heights to the group of historic neighborhoods that would have additional home-sharing restrictions placed upon them.

The “wrong kind” of arrangements, Box explained, could arise in the instance of Airbnb occupants looking to have a good time in a neighborhood they don’t belong to.

“There’s a whole other set of people who stay at Airbnbs,” Box said, “like a group of guys looking to have a bachelor party over a weekend.”

A party atmosphere inclusive of loud noise, overcrowded parkways, drinking and driving opportunities and the like are reasons residents expressed a desire to distance themselves from home-sharing operatives.

But Ward 2 councilman Ed Shadid said the historic neighborhoods’ desire to operate on a set of rules different from those governing the rest of the city brought back unpleasant memories of a different kind of separation.

“These are some of my favorite neighborhoods in the city,” Shadid said. “But there’s also … a dark side to our city’s history. Anyone who was black wasn’t allowed to lease or own a home in Edgemere Park until 1975. When I hear a group of neighborhoods say they don’t want some of ‘those people,’ it evokes some of that hurt.”

Box said that while the community’s past beliefs are unfortunate, similar community charters existed throughout Oklahoma and across Southern states during the same time period. Racism, Box said, has no place today within Edgemere Park or Heritage Hills.

Groves said the historic neighborhoods deserve additional regulations due to the fact that they are, in fact, historic.

“These are some of my favorite neighborhoods in the city, but there’s also a dark side to our city’s history.” — Ed Shadid tweet this

“I’ve lived in Edgemere Park since 1974,” Groves said. “Our land was deemed HP (historically preserved), and as a result of that, a couple things happened. The neighborhood was afforded a layer of protection that’s not afforded to some other neighborhoods. We also have different responsibilities. We can’t change the exterior of our homes without going to the HP commission and seeking a Certificate of Appropriateness. Most of us don’t mind this though we’ve sure had our fair share of arguments over the years … about windows and garages and things. If Airbnb-type operations are allowed in places like Edgemere, it will be a fundamental change in the zoning district.”

Groves said that while neither he nor Box are outright opposed to home-sharing businesses taking place in their historic neighborhoods, they are insistent that such operations come with additional restrictions.

Groves said their requested amendment calls for Edgemere Park and Heritage Hills residents who wish to operate Airbnb businesses on their properties to give notice to their neighbors about their desire to do so, to participate in a neighborhood hearing in which neighbors can voice any concerns they might have and to be present in their home during the duration of an Airbnb guest’s stay.

Current home-sharing requirements listed on the city’s website include only that the home listed for use is the homeowner’s primary residence, the property is zoned for residential use, the homeowner pay a hotel tax of 5.5 percent if more than one bedroom is used, the homeowner complete appropriate business tax forms, the homeowner obtain an OKC hotel-motel license for $24 and the homeowner maintain appropriate building codes if four or more bedrooms are used.

Currently, there are over 300 homeowners within Oklahoma City who share their homes through services like Airbnb. Several operators live in historic preservation communities.

Penner said he and Hotel & Lodging Association members would like to see even more regulations placed upon Oklahoma City’s Airbnb operations.

“We are respectfully asking you to add some teeth to this home-share ordinance,” Penner said to councilmembers. “I’d like to point out that less than 20 percent of Airbnb’s business is true home-sharing where the owner is present during the guest’s stay. Thirty-two percent of Airbnb’s U.S. revenue is not being generated by middle-class folks but by multi-unit operators who rent out two or more entire home units. Even more convincing is that this is the fastest-growing segment of Airbnb’s business.”

Penner went on to request that OKC Airbnb operations be regulated the same way hotels within the city are. He said regulations should enforce parking requirements, code inspections, tax collections and safety protocols.

Spradling said proponents of additional regulations are living in the past.

“Airbnbs are good for Oklahoma City and for our economy,” he said. “I myself live in a historical home in Edgemere Park. I have never met my next-door neighbor. She is an absentee owner who leases out her house to three to four millennials every year. I have to deal with parties and an unkempt lawn. I would much rather she furnish her home and use it as an Airbnb.”

Regulation advocates are equally unaware, Spradling said, of who Airbnb guests are.

“I can tell you that one of our Airbnb owners keeps an Airbnb near a prosthetic center because he has a 54-year-old client who tragically lost a limb and has to visit the center five times a month. She does not want to climb stairs in a hotel or get on an elevator with her new prosthetic device. She wants to have the privacy of being in a homelike atmosphere where she can learn to walk again.”

Spradling warned councilmembers that national Airbnb representatives have fought against city regulations through lawsuits in other states and that they will not hesitate to do so in OKC if necessary.

Hotel & Lodging Association representatives said on Tuesday that if a lawsuit is brought against the city, they will offer their unwavering support.

City councilmembers voted to readdress the home-sharing ordinance during the Oct. 25 meeting.