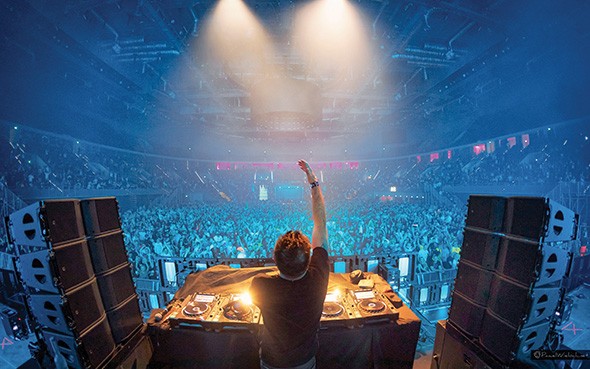 Stonehenge. The Great Wall of China. Mount Everest. OKC Farmers Public Market. By the end of this month, world-renowned DJ Paul Oakenfold will have played them all.

“I’m going to be DJing at a farmers market?” asked Oakenfold during a phone interview with Oklahoma Gazette. “Am I really?”

Oakenfold — whom Guinness Book of World Records listed as the most successful DJ in 1999, Rolling Stone called “arguably the most controversial figure on the dance scene” in 2000 and London Evening Standard named the most influential DJ of all time in 2018 — plays 7 p.m. Jan. 31 at OKC Farmers Public Market, 311 S. Klein Ave.

“His influence is astonishingly wide,” wrote Evening Standard’s Jochan Embley. “He was a driving force behind acid house and trance, he released Carl Cox’s debut single on his legendary Perfecto label, he produced the Happy Mondays, he remixed Britney Spears, he’s toured with U2 — so on and so forth. His DJ residencies in the UK, back on the White Island and around the world established him as one of the finest selectors, influencers and artists we’ve ever seen. Simply a titan of dance music.”

After we assured him that Farmers Public Market is actually a venue, we spoke to Oakenfold — who, for the record, said he has been to Oklahoma once before and enjoyed it — about his creative process, his upcoming fourth album Labor of Love and creating DJ sets for some of earth’s most famous landmarks.

Oklahoma Gazette: How do you decide when you want to put out a full album?

Oakenfold: I think, as an artist, to share a body of work is much better than a single. I believe that I’ve got a lot more to say in a body of work than one track. I grew up in England, London, on many different styles, so all my influences are different kinds of music, so I want to showcase that.

It’s a lot harder. It’s easier to make one single rather than 10, but at the moment, that’s what I want to do. And that could change. I mean, artistically, it’s always good to grow whatever line of business you’re in. With music, I just have all these different ideas and to try to cram them all into one track just doesn’t work for me. This album really is an album that you sit there and listen to as a piece of work rather than certain tracks. Well, I hope people will, anyway.

OKG: How do you decide what’s next for you?

Oakenfold: It’s a very interesting question because as you grow older, life changes, and with that comes situations where you say, “Well, I don’t need to,” in terms of, “I’ve DJed certain places I’ve been to many times, and maybe I won’t go back there, or maybe I’ll just want to focus more on staying at home and working in the studio, making music.” It just kind of comes to you. I mean, there’s no particular time. Now, I will be releasing an album; I know I have to be touring and supporting it, but I’m fine with that.

OKG: Do you have a bucket list of things that you haven’t accomplished yet that you want to?

Oakenfold: There’s a couple of places I haven’t been to, but generally, no, I just kind of get on with it, really.

OKG: Was there a point early on where you remember just thinking that electronic dance music was going to get as big as it has?

Oakenfold: It’s very strange because I always thought electronic music would be popular in the U.S., but it took forever. It was much more popular in Europe, but once it did come in and became commercial, it just exploded.

OKG: You’ve done so many remixes of so many different kinds of things. Is it possible to remix a bad song into a good song?

Oakenfold: You can certainly make a bad song a better song, yeah, with music, but a song’s a song. It’s difficult to change the actual lyrics of the song, but you can certainly add better music to it to make it a better track.

OKG: When you’re going to do a set somewhere like Stonehenge or the Great Wall, do you approach that in a different mindset?

Oakenfold: That’s where I really am, to be honest with you, because these are unique shows that have never been done before. They’re challenges, so when I, for instance, DJed on Mount Everest, I trained six months to prepare for that, in terms of being fit. I was hiking seven hours a day, so I had to train. I gave up drinking. In terms of music, I sat and really thought about the choice of music, how it was going to play, because the altitude is so high you can’t really dance because you’ll be out of breath.

Stonehenge was the same in terms of preparation because I was playing to the sunset. At the locations that I was at prior to that, I was just watching sunsets, wherever I was, even at home. I had to time it all out so I knew what record I was going to play as the sun went down, these kind of things. So there’s a lot of preparation that goes into it because I want it to be the best ever show.