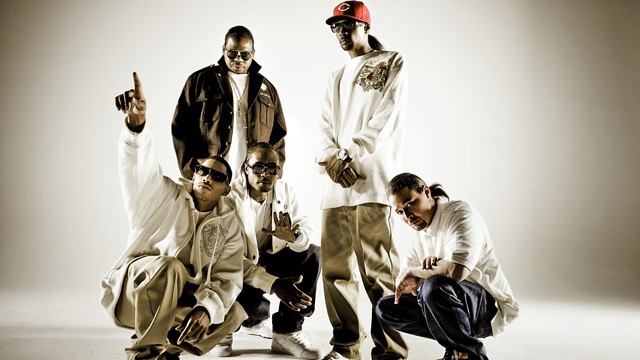 With little more than the clothes on their back, the four founding members of the group that would be Bone Thugs-N-Harmony stepped off a Greyhound Lines bus from their native Cleveland, Ohio, and onto the Los Angeles streets with one sole mission: to find N.W.A. founder and Ruthless Records mastermind Eazy-E.

The group — which includes cousin duo Krayzie Bone and Wish Bone, Bizzy Bone, Layzie Bone and his brother Flesh-N-Bone, who would not be named a contractually official member until later — had “auditioned” for Eric “Eazy-E” Wright over the phone months earlier. The rap mogul promised he would call them back, probably with the same level of sincerity he gave to the hundreds of other rappers begging for a moment of time with the man behind what was once one of hip-hop’s most popular record labels.

Bone never got a call back. The group that would eventually become the first and only act to record with Eazy-E, The Notorious B.I.G. and Tupac Shakur somehow failed to make an impression on Wright. But in his defense, the group’s unique blend of double-time rap delivery and singsong melody loses a bit of its nuance over early-’90s phone lines.

The Thugs never did locate Eazy during their time in L.A., but they did eventually hear from someone that the rapper was on his way to do a show in their hometown (this was a time before the convenience of Facebook, Pollstar or Bandsintown). They quickly found a bus ticket back to Cleveland and somehow met with Eazy after the show, this time auditioning for him in person. Eazy had never seen anything like it and signed the group on the spot.

Less than a year later, in 1994, Ruthless Records put out the group’s debut EP Creepin’ on ah Come Up, which peaked at No. 14 on the Billboard chart. And less than a year after that, Eazy E was dead, succumbing to a harsh battle with the AIDS virus.

The death of their mentor and chief financier could have been enough to derail the group then and there, but Ruthless kept operating, and the public appetite for Bone Thugs-N-Harmony was undeniable. The group’s debut full-length on the label, 1995’s E. 1999 Eternal (the members grew up on the corner of Cleveland’s East 1999 Street and St. Claire Avenue) debuted at No. 1 on the Billboard chart. Its melancholy single “Tha Crossroads” reached No. 1 on the Billboard Hot 100 list and won a Grammy for Best Rap Performance by a Duo or Group in 1997.

The Bone Thugs-N-Harmony origin story is one that just plain wouldn’t happen today. Face-to-face meetings with music’s biggest power players are hard to come by, and it takes more than original talent to find a major record deal. Plus, the internet has leveled the playing field to a point where a truly original act can independently build a large following on YouTube or Soundcloud.

No future rap group may rise to prominence in the exact same way that Bone Thugs did, but the contemporary hip-hop landscape is filled with big-name acts that claim Bone as a major influence.

In a video posted to Bizzy Bone’s official YouTube channel, Kendrick Lamar enthusiastically gives his props to Bone Thugs-N-Harmony for the impression the group left on him growing up in the shadow of Ruthless Records.

In terms of pure rap mechanics, there are not a lot of parallels to draw between arguably all of music’s artist du jour and the group known for wearing long Afros or straightened hair back in the early- to mid-90s. But thematically, Bone often ventured into the realms of spirituality and mysticism that Lamar brings up today. Bone Thugs makes unapologetic references to Ouija boards, souls and heaven on E. 99, and Lamar has repeatedly referenced how he feels compelled to make music by the ghost of Tupac.

Drake, who is far and away hip-hop’s best-selling rapper, has repeatedly stated has love for Bone Thugs. The stylistic similarities between the two, in specific regard to his rap-sung flow, are clear.

“His manager already told my homeboy he used to listen to Bone Thugs-N-Harmony before he wrote his music,” Bizzy Bone said in a recent interview with TMZ.

Even more than singing, the Bone Thugs style is most associated with the fast, double-time flows that were perfected by its members and other rappers from the Midwest, including Twista, Eminem, Do or Die and Tech N9ne. The lyrical gymnastics displayed in these lightning-fast flows are a spectacle, but it can make the lyrics hard to follow.

Similarly, the slower-paced, loosely enunciated flows used by many of mainstream rap’s youngest artists (often dubbed “mumble rap”) can be a challenge for those trying to follow along at home.

Krayzie and Bizzy Bone acknowledged the similarity on a recent interview for VladTV. Krayzie also added that while many young artists today might not acknowledge how Bone Thugs influenced them or even be aware of the group’s existence, many of their styles can be traced through hip-hop’s generations back to the Cleveland five.

“It’s crazy, because when we were first trying to get into the game, it was the opposite,” he said. “It was strange because we called ourselves rappers, but we were singing. Now, today, it’s unheard of not to have a [melodic] hook. It’s unheard of for a rapper to not try to sing in their songs, and if they can’t sing, they use Auto-Tune to make themselves sound like they can sing.”