Cafe Kacao is one of the city’s most beloved breakfast locations, but how does it handle expanding its hours and menu to dinner?

The waiting line outside Cafe Kacao, 3325 N. Classen Blvd., on the weekends is a sure sign of a high-quality breakfast inside. The Guatemalan restaurant is the highest rated breakfast on Yelp in Oklahoma City and has ranked in Oklahoma Gazette’s reader poll as the city’s best breakfast on multiple occasions.

The first time I visited Cafe Kacao was like organizing a trip to see the sun rise. I had driven by many times mid-morning and seen the line. Bound and determined to beat the rush, my girlfriend and I set dual alarms for pre-dawn and set up a tent in its parking lot. OK; the last part is hyperbole, but we arrived a few minutes before its listed 8 a.m. Saturday opening to find the restaurant already nearly full.

It’s easy to see why the breakfast is so highly sought-after. The combination of sweetly decadent desserts-disguised-as-breakfast, such as pancakes topped with Oreos or mango, and the unique flavors of Guatemalan favorites like motuleno, corn tortillas filled with black beans topped with ranchero sauce and a fried egg, are a unique pairing that excites the senses.

Add in the fact that Cafe Kacao is one of the most interesting coffee houses in the city serving an assortment of interesting espressos, lattes and cold brews, and it seems as if the restaurant checks off all the boxes for the perfect destination brunch spots in the city.

Cafe Kacao opened in 2011 under the management of owner Luidgi Del Cid, whose mother Alba Veronica opened the city’s other Guatemalan hot spot, Café Antigua, but sold her original venture some years ago. She then joined her son in the kitchen at Cafe Kacao. 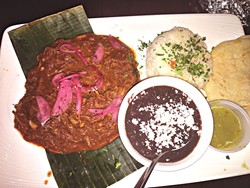 Back in May, Del Cid announced his restaurant would be expanding to dinner service and expanding hours from 3 p.m. to 9 p.m. during the week. With the extended service came new menu items like empanadas, pupusas and ceviche.

The new hours have done little to put a dent in the weekend line, which still regularly snakes around the corner of the restaurant’s tinted windows, but how has the restaurant handled the new menu and hours?

When I heard the news that Cafe Kacao was expanding, I was head over heels. I wouldn’t have to wake before the sun rose to get a good seat. I could stroll in after work and enjoy a nice plate of machaca: scrambled eggs mixed with lime-braised shredded beef, tomatoes and onion.

I knew the breakfast was good, but what about the rest of the menu? The first item I tried on the new menu was the pupusas ($14), which are a personal favorite, and I was excited to see them on the menu for the first time in Oklahoma City. Pupusas, which originally hail from El Salvador, are almost like a stuffed tortilla, but thicker. The masa harina for the pupusas is the same used on its tortillas, but it’s stuffed with a melty, mild cheese and shredded pork. Served with marinated cabbage and a pair of sauces, it’s easily my favorite thing on the new menu.

I’ve also tried the carne adobada ($12) on a previous visit, and I was less enamored. The idea of a marinated pork steak sounded better in my head than it did in execution. The marinade was flavorful, smoky and spicy, but a pork steak served whole isn’t exactly the most appetizing cut of meat. I find it’s usually better to braise the steak as a full Boston butt until it shreds. What I got was gristly and uneven in texture.

During my latest meal, I felt much more confident in my order: empanadas, flautas and cochinita pibil, which is slow-cooked pork in citrus and guajillo pepper sauce.

The empanadas ($9), which I will often make at home, were unlike any I’ve had or made on my own. I’ve eaten many empanadas across a variety of preparations from countries all over South and Central America, and I can say that Cafe Kacao’s are the first I’ve had with a corn dough; usually, they’re made with flour.

The corn dough allows the outside to get crispy in the fryer while retaining a pillowy center. The shredded pork on the interior almost melts along with the cheese to create a filling where it’s hard to tell where the cheese ends and pork begins. Add in a little sourness from crema on top, and the empanadas are a can’t-miss.

I wish I could say the same for the cochinita pibil ($14), which arrived a step above lukewarm. I assume it sat on the plate while the flautas finished frying. I meant to tell my server, but he disappeared before I could alert him. On first bite, the citrus-guajillo sauce intrigued me, but halfway through the dish, I found that the citrus drowned out the spiciness of the pepper. I also nearly ate a piece of a bay leaf because I thought it was a caramelized onion, and I never expected to have to fish two inedible bay leafs out of the sauce.

The flautas were an above-average execution of the dish. The exterior was crisp without being oily, and the shredded chicken was bolstered with potato for a nice contrast.

I’ve tried the new dinner menu at Cafe Kacao on multiple occasions, and it has been hit-and-miss. The last few times in particular, I’ve regretted not ordering breakfast, which can be ordered all day. Perhaps the best thing that has come from dinner service is that Cafe Kacao’s delicious breakfast is available into the evening.

Print headline: Beyond brunch; Cafe Kacao is one of the city’s most beloved breakfast locations, but how does it handle expanding its hours and menu to dinner?

What works: The empanadas and pupusas are new menu items that are a must-try.

What needs work: The carne adobada would be better braised.