In some ways, the Buddha Leaf album and release show marks a new phase in the growth of steady-flowing local emcee HuckWheat and the Sativa Prophets collective.

HuckWheat has played at Speakeasy alongside members of Sativa Prophets music and art collective before, but the Buddha Leaf release show marks the first time they organized a show there themselves. The fact that it’s a free gig should draw in even more people. 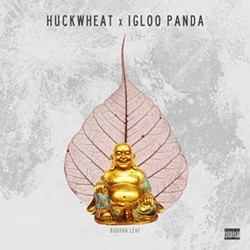 “It should be flooded, man, just with all the people who are already going to be out there,” said HuckWheat, whose birth name is Mike Huckeby.

Buddha Leaf, HuckWheat’s follow-up to 2014’s Milk n Honey, is produced by one of Oklahoma City’s most prolific hip-hop producers, Igloo Panda, who also belongs to the collective. The album was developed on an on-again off-again basis over 18 months.

The Prophets appear newly focused and primed to take their brand to another level.

“There’s a difference between doing music and trying to do business, honestly,” HuckWheat told Oklahoma Gazette. “There’s taking music seriously, and then there’s another level where we decided we were going to start taking the business part seriously.”

Panda said he’s trying to expand his work beyond just making beats. He is working to further improve the Prophets’ video production and described plans to pursue fashion and art.

He hopes the Prophets and others in the local hip-hop community can wedge themselves up through cooperation.

“It’s cool to be known in Oklahoma City, and I love it, but at the same time, I feel like there’s enough artists here that we could start a real scene,” he said. “There’s a lot of talent here, and people have never heard it.”

Musically, Buddha Leaf has many different elements to offer. From some of the hardest one-liners and flows you’ll hear from any local emcee to slowed down, floating vocals and even straight-up singing, there’s a lot for a listener to digest in one sitting.

However, with each additional spin, HuckWheat’s talent becomes more apparent to the listener. It won’t be hard to rack up the play numbers. After the track list was set, Panda said he went back and adjusted the beats to ensure butter-smooth transitions.

After working on and toying with the songs for more than a year before its release and hundreds of listens afterward, HuckWheat said he was surprised by how much he still likes Buddha Leaf. He’s proud of how much work went into the album and how distinct it sounds on a local and national level.

“You just want people to hear you and to feel you,” he said. “From the instrumentation and on, I want them to open up because it does sound different than a lot of what’s out right now.”