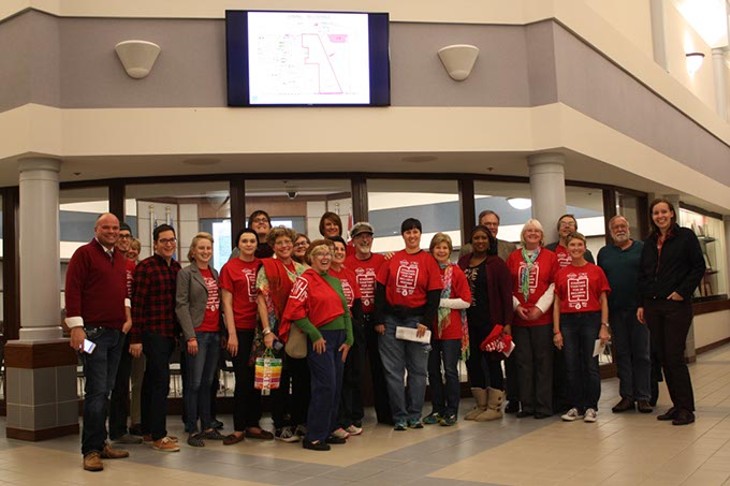 Following the Dec. 22 vote, supporters — many dressed in red T-shirts with the words “Standing together for an inclusive Norman” on them — exchanged hugs. Others wiped away tears.

“Norman has shown itself to be a leader in the state of Oklahoma and set the bar high for other cities,” Stevenson said.

He also shared Freedom’s plans to push for similar resolutions in cities across the state.

“We look forward to the state of Oklahoma seeing what is happening and passing protections for all Oklahomans,” he said.

Before the vote, Rosenthal, who leads the state’s third largest city, said the resolution also recognized equal rights for LGBT residents regarding employment, housing and visits to restaurants, shops and entertainment venues.

“This resolution is of historical significance because we are reaffirming this community’s commitment to the value of inclusiveness in the lives of our citizens,” she said. “All citizens can enjoy the opportunity to participate equally in the social and economic life of this city.”

While the resolution received support from Freedom Oklahoma and grassroots community coalition Norman United, it was the City of Norman’s Human Rights Commission that brought the issue to the council’s attention. The group meets quarterly and advocates for fair employment and economic and social rights of citizens.

Following the human rights commission’s October meeting, city attorneys drafted a resolution to update code to include LGBT protections. Stevenson attended the October meeting and the council’s Dec. 8 conference, where the issue was introduced. From his experience, successful implementation and enforcement of LGBT protections often begins with a human rights commission, which works to prevent and eliminate discrimination.

Among the state’s largest cities, Norman, Tulsa and Lawton have formed such commissions.

“This exact process wouldn’t be possible in Oklahoma City because there is no human rights commission,” Stevenson said. “There is a lot of work to be done.”

In 1988, Oklahoma City reestablished its Human Rights Commission after a burning cross was erected on the property of a northeast OKC church and local Jewish temples were vandalized with graffiti, according to 1990s-era news reports.

The commission worked with a coordinator to conduct mediation for residents involved in human rights disputes.

In 1993, its duties were reduced from mediation to education, which included presenting at civil rights-related community forums. In the mid-1990s, the group was met with resistance when it advocated for recognizing protection of sexual orientation. In January 1996, Oklahoma City Council abolished the commission.

At the state level, after 50 years of service, the Oklahoma Human Rights Commission, which promoted civil rights laws and investigated complaints of discriminations, also was abolished. The commission’s duties were transferred to the Oklahoma Attorney General’s Office.

The amendment calls for banning discrimination based on certain classes, including disability, age and familial status, specifically families with children.

Currently, it is illegal for a landlord or real estate agent to discriminate against a person based on factors relating to race, color, sex, religion, national origin and ancestry.

Proposed changes would reflect protections provided under the federal Fair Housing Act, enacted as Title VIII of the Civil Rights Act of 1968. Requested by the city’s planning department, adoption would qualify the city for U.S. Department of Housing and Urban Development grants.

For one council member, however, the amendment wouldn’t go far enough to protect residents from discrimination when buying, renting or financing a home.

Ward 2 Councilman Ed Shadid wants lesbian, gay, bisexual and transgender classes recognized in the housing discrimination ordinance. City attorneys said that a floor amendment specifically addressing LGBT protections will be added during the final hearing at Tuesday’s city council meeting. The council also is expected to vote on the ordinance then.

Additionally, the proposed change to Oklahoma City’s ordinance supports the current practice in which city staff collect complaints and forward them to the Oklahoma Attorney General’s Office.

Stephenson said the inclusion of sexual orientation and gender identity in the housing discrimination ordinance is just the beginning of Freedom Oklahoma’s advocacy efforts in Oklahoma City. Reestablishing human rights commissions also is a priority.

He also said OKC is one of the largest cities in the nation without a commission.

“It does work in other cities, not just for the LGBT community, but other minority communities,” Stevenson said. “Having that resource to air a grievance to a municipality is vital, and it really helps minority communities feel like they have a voice in the city.”

Freedom Oklahoma is not alone. Priya Desai, president of the Oklahoma chapter of the United Nations Association of Oklahoma City, believes a human rights commission would be a positive measure for the city.

“The residents of Oklahoma City would benefit from a human rights commission to investigate complaints of discrimination, monitor compliance with equal employment and fair housing laws and promote equity and inclusion in the delivery of city services,” she said.