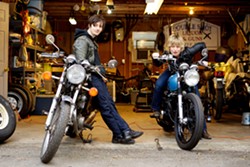 A “so cute and perfect you want to gag” couple, the South Carolina lovebirds enjoyed separate singer-songwriter careers when they married. But just as two lives became one, so too did two careers, and Shovels & Rope was born.

“We’d both made solo records about the same time, and we were trying to tour in support of them,” Trent said. “Cary would sideman for me. Then she’d have a gig at the same place the following weekend and I’d sideman for her. It was kind of stupid that we couldn’t just throw all the songs into one thing.”

Early on, the husband-and-wife pair was content to leave things messy.

“We set out with a goal to compartmentalize, but tour became life, and life was on the road more than at home,” Hearst said. “It all became just one thing.”

Their spotlight came in 2012, on the heels of sophomore album O’ Be Joyful — a modern alt-country classic — but instead of deflecting any scrutiny, they controlled it with The Ballad of Shovels and Rope. The rock documentary, directed by friend Jace Freeman, intimately spells out Hearst and Trent’s dedication to their craft and to each other.

“We were pretty shy about it. It’s an honest, loving portrayal. There’s no scandal, no blood and gore. But when your real life is projected on a screen, it is a little scary,” Hearst said. “Twenty years from now, though, we’ll be able to show our kids that Mom and Dad were pretty cool at one time.”

“There might have been pressure for some artists to do something or please people; to replicate something specific your last album did,” Trent said of the new record. “For us, it was just a new thing. We went for it all the way, and I feel really good about it.”

Hearst credits the duo’s evolution to embracing the indie rock tendencies Trent experienced in his days fronting another South Carolinian outfit, The Films.

“It makes the songs even more compelling than if I was just left to my own devices,” she said.

Shovels & Rope performs Thursday at the ACM@UCO Performance Lab. The stop is part of a tour punctuated with a Valentine’s Day gig at the famed Ryman Auditorium in Nashville, and the band jump-started 2015 with a Late Show With David Letterman appearance. In August, the pair also scored a top 20 Billboard 200 chart debut with Swimmin’ Time. It appears their honeymoon won’t end anytime soon either.

“It was pretty friggin’ awesome to open up a Rolling Stone and see our name on the Billboard chart in the back,” Hearst said. “You don’t have to be Rihanna or Justin Timberlake to get your name on that chart anymore.”