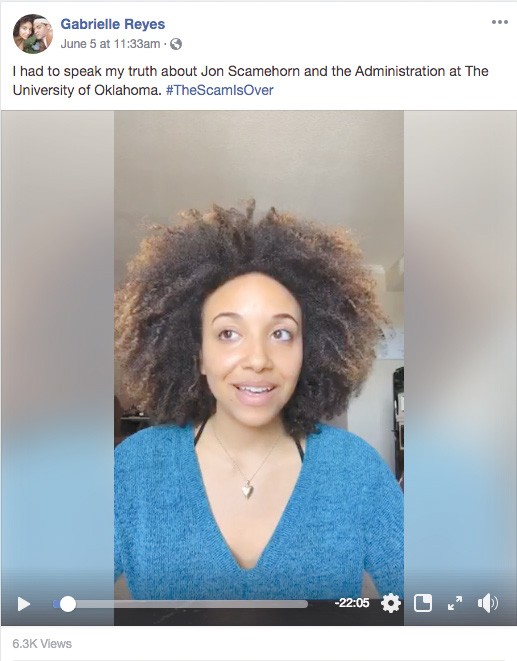 The alleged sexual misconduct of University of Oklahoma (OU) emeritus professor and former donor John Scamehorn has garnered a lot of attention recently, but some former students are saying the university’s school of drama fostered an environment that might have been conducive for such harassment.

Scamehorn’s donor status with OU’s Weitzenhoffer Family College of Fine Arts was rescinded in February 2016 after the school received several student reports of alleged sexual harassment and the possession of improper student photographs and images. His donations were also returned.

Wide public interest in the allegations was spread after several social media posts detailed the ways in which his involvement with the school’s theater and acting programs might have been inappropriate.

At least one former student claims to have filed a Title IX complaint against Scamehorn in 2016, but OU’s Office of Open Records says it has no record of a formal complaint related to Scamehorn. Fine arts college dean Mary Margaret Holt did receive information from a student in January 2016 that prompted her to contact the school’s Title IX office, which immediately launched an investigative inquiry.

On Dec. 19, Scamehorn’s Facebook account posted a link from Lexington Herald-Reader with the headline “UK Prof: Singing a Beach Boys’ tune got me punished for ‘sexual misconduct.’”

Scamehorn posted the link with a clause from an apparent OU discrimination policy and the comment that it should serve as “food for thought for those who falsely accuse men of slanderous behavior because of hypersensitivity.”

But Scamehorn is not the only person tied to the OU theater program with potential Title IX complaints. Former student Brynne Frauenhoffer spoke with Oklahoma Gazette this month after filing a complaint against current Helmerich School of Drama director Tom Orr.

Frauenhoffer, a December 2014 OU drama graduate, claims that Orr frequently made blunt remarks about students’ physical appearances and sexual appeal and particularly how those things might affect their viability as professional performers.

“There were implications, from Tom specifically, that to make it in the industry, you had to accept sexual harassment,” Frauenhoffer said.

Orr did not reply to Gazette requests for comment.Frauenhoffer, who now works as a playwright in Chicago, said she only took one class with Orr in her OU career, Professional Preparation, in fall 2013. The course was intended to prepare students for careers after graduation and dealt with resumes, headshots and budgeting. Frauenhoffer said one day, Orr asked his students to bring in photographs of several Hollywood actors they felt were physically similar to them.

He reviewed the photographs with each student in front of the rest of the class. When it was Frauenhoffer’s turn, he appeared dismissive.

The activity struck Frauenhoffer as an act of intentional public humiliation. She said she understands being blunt about a student’s work as a way of helping them, but she had never experienced anything like this. She recalls crying on the phone with her mother later that night.

Frauenhoffer said she and other students would often receive comments from Orr about their need to lose weight. The comments made her doubt her self-image and whether she had potential in theater.

During another one of Orr’s classes, he asked students to assess themselves physically. Frauenhoffer remembers describing herself as “pear-shaped” and making some self-deprecating remarks.“[Orr] laughed, and I don’t remember the exact words, but he said, ‘No one in film will find you attractive, no one in theater will find you attractive, but I am so attracted to you, you have no idea,’” Frauenhoffer said.

She laughed off the comment at the time, but in hindsight, she has come to recognize what he said as sexual harassment. It took her awhile to come to this conclusion, which is why she said she waited so long to file her Title IX complaint.

“I had no fears that he would advance on me sexually, but it was a power play,” Frauenhoffer said. “It was a power move to say, ‘Other people will say you’re ugly, but I’m attracted to you.’”

Frauenhoffer is not the only former student claiming that Orr helped create an environment in which some students felt uncomfortable. On June 5, former student Gabrielle Reyes posted a video on Facebook that criticized OU’s role in harboring Scamehorn as a donor and its general attitude toward student complaints. The video now has more than 6,000 views.

“There was an understanding that Tom hypersexualized a lot of the female students and some of the male students,” Reyes said in a recent Gazette interview.

Reyes said there is nothing inherently wrong with being sexual, but Orr was in an instructor role over students ranging mostly in age from 17 to 22. She recalls several occasions in which Orr remarked about students’ weight or attractiveness.

“His concept of females was very skewed, and it was very, very misogynistic,” she said. “And because he is a white man of privilege, he did not recognize that.”


Reyes believes Orr exemplified a “pre-#MeToo” mindset — one that saw sexual harassment as a part of the acting industry that those who chose to participate in it were forced to accept. She also recalls Orr complaining about the program’s lack of funding after the university revoked Scamehorn’s donor status in 2016.

“Being a man of privilege and in a position of power, he still understood the industry to be just that,” she said. “Unfortunately, it was in a time of change, and he really was just ignorant to the feminist movement going on that was stumbling then but is now in full force.”

In an email statement to Gazette, Holt did not comment specifically on Orr but did say that the safety and well-being of students has and will continue to be her top priority.

“I know that maintaining a culture free of harassment is our collective goal and we must all continue to be vigilant in helping develop and maintain a safe learning environment by utilizing all of the resources available to us,” she said. “My commitment to this goal is and will remain firm.”

Holt also added that students who have been victims of harassment should know they have several resources available to them, including the confidential resource OU Advocates, a 24-hour hotline students can call at any time when they feel subject to sexual assault, relationship violence, stalking or harassment. The hotline is operated by OU’s Gender + Equality Center.

“Every report is taken seriously,” she said. “I hope all will please feel free to share these resources with others.”

In a university statement made June 7, OU acknowledged to those who had shared reports of harassment that its response system to student complaints could be improved.

“Your stories have highlighted that there may be gaps in our reporting and response, and we are actively investigating to ensure that will not happen in the future,” the statement said. “We will always strive to do better.”

Reyes said she looks back at her time at OU favorably, but mostly because of the relationships she made with other students while she was there.

“OU helped me get to where I am now,” she said. “It helped me know what autonomy is, and these experiences I’ve had with Tom helped me in my worth as a person and to understand those things are not OK.”

She also said the School of Drama’s female staff were not people that would have been supportive of this type of behavior, but she believes they did not speak up because they were afraid they could be fired.

Frauenhoffer said she took both positives and negatives from her time at the university and she is still trying to process her experience at the school.

“There are things about my experience that I feel very sad and angry about still,” she said. “I don’t know if I would recommend it to anyone else or not. I do want to recognize that, of course, it was not all bad, but I do feel like I was put in harm’s way at times.”

What Frauenhoffer wants from the university going forward is openness regarding past conduct and a willingness to learn and change.

“I don’t want to ruin anyone’s life,” she said. “I just want individuals to be held accountable for what they’ve allowed to happen and perpetuated. I want to help protect future students — male and female — from experiencing what I felt during my undergraduate.”