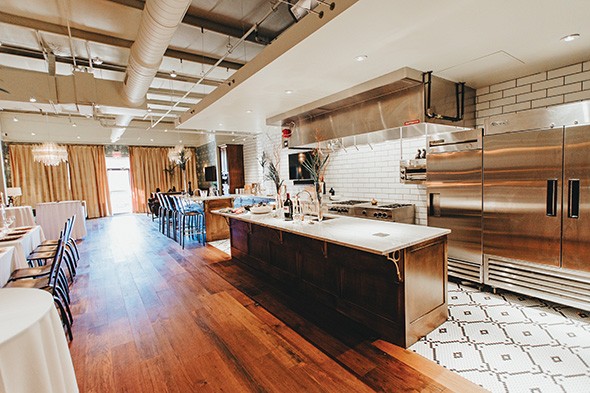 In six years working at a host of venues across the metro area with Cosabella Catering, restaurant veteran Erica Hogan never found a venue where she could fully prepare meals on-site.

Tired of always having to prepare meals in other people’s kitchens, Hogan has opened Cosabella Kitchen, 6516 N. Olie Ave., Suite C, which aims to be the first fully functional catering and event space that will also host cooking classes by the summer.

The 60-person capacity event space is a blend of classic and modern aesthetic, with a few nods to her family’s restaurant history. Hogan’s parents, Linda and Reed Bramlett, operated Le Cep Bistro in Edmond, and her brother Curtis Bramlett owned and operated Bolero Tapas Bar and Spanish Grill in Bricktown for years.

The booth that accommodates sit-down dinners at Cosabella Kitchen was in both Le Cep and Bolero. Some of the equipment from the kitchen and a few chairs in the space were used in each restaurant and are paired with interior design from Culinary Kitchen.

“There’s a lot of sentimental value in here,” Hogan said. “My daughter was two and half [now going on 14] when I started in the restaurant business and would run up and down past these booths. That’s a great memory.”

Hogan’s father ran a successful wine import business, which meant numerous trips to France, where Reed and Linda fell in love with French cooking. Their son got his culinary degree at Oklahoma State University before three years of study at the French Culinary Institute in New York.

Hogan managed Le Cep for five years after graduating from University of Central Oklahoma with a science-based degree. She developed a love for cooking and hasn’t looked back.

“Growing up, we’d eat beef bourguignon at least every other week,” Hogan said. “My mother was great cook, but my father loved French cuisine. Watching him was how I got all of my inspiration, and learning in Le Cep watching my brother cook. That’s my style of cooking; it’s really creative.”

Hogan started her own catering company about six years ago, and she has incorporated many of those French elements but added her own flair. She also likes to work with clients to build a menu they’d like to see.

“Catering is where I found my individual creativity,” Hogan said. “It was the food that I started to make versus in the restaurant, when the menu was pretty much the same for 6-10 years.”

In the first six weeks at Cosabella Kitchen, Hogan hosted 13 private parties that have included birthdays, wedding rehearsals, corporate events and even one full wedding. She can serve sit-down dinners for up to 50 and events with buffet service for up to 60 people. The space has a $150 base charge for 20 people with $400 minimum for food and the base charge can go as high as $350 at full capacity. She said it is $18 per head for a party.

Watching [my father] was how I got all of my inspiration, and learning in Le Cep, watching my brother cook.Erica Hogan tweet this

“A lot of clients want an Italian night or French or steak or vegetarian,” Hogan said. “There are so many categories. I’m comfortable cooking a lot of French country peasant dishes. That’s what I love to do. It’s fun for clients to give me suggestions because I get to be so much more creative.”

It took an 18-month renovation process to convert the space from a former Pizza Hut call center to an event space that blends art nouveau, art deco and modern elements. What used to house multiple small offices with a low ceiling is now a warm and inviting place  that was inspired by intricate wallpaper from 19th-century English designer William Morris. There are leather lounge chairs that match the dark-stained hardwood and hexagonal art deco tiles that would fit into a New York hot spot next to a sleek and industrial kitchen accented by a huge copper espresso machine.

“It’s everything I’ve ever wanted, and I’m excited to get going,” Hogan said.

In the hallway to the bathrooms in the back of the space is a blown-up photo showing hands cutting dough. Hogan took the photo on her iPhone, and it’s of famous director Francis Ford Coppola, whose Oklahoma connection dates back decades thanks to longtime colleague and producer Gray Frederickson, an Oklahoma native. Coppola stayed in a building that the Hogan family owns during a trip to the state, and he dropped by to show Hogan and her daughter how to make his gnocchi recipe.

“We cooked multiple meals together, and he’s a really nice man,” Hogan said.

Among the other recipes Coppola taught Hogan was one from the family of another famous director: lemon chicken by Martin Scorsese’s mother. The recipe is a mainstay at the Francis Ford Coppola Winery in Geyserville, California. It is a recipe that is simple and could easily be added to a menu at Cosabella Kitchen.

“I make it at home three times a week,” Hogan said. “It’s really just lemon, chicken and oregano. It’s very tart but very good. Anyone can make it.”