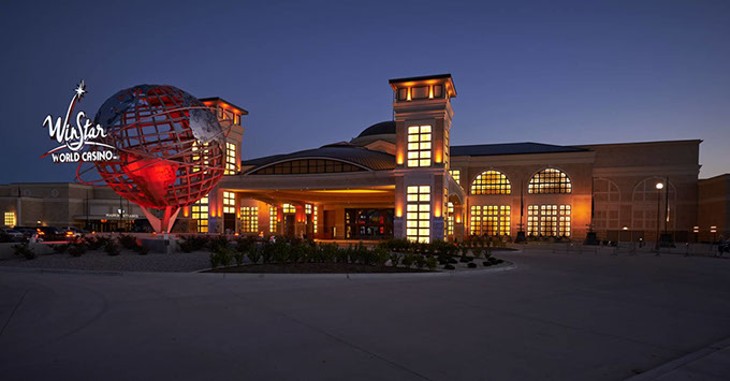 According to a new economic study commissioned by the Oklahoma Indian Gaming Association, the state just hit the jackpot.

The study, released in January and covering the economic impact of gaming operations in Oklahoma for 2015, reports a total impact of $7.2 billion from operations and construction, up from $6.9 billion in 2014. While Oklahomans notice the impact based on heavy traffic and packed parking lots at Thackerville’s WinStar World Casino and Resort, the Choctaw Casino Resort in Durant and other gaming powerhouses in the state, the new report puts numbers to the visuals.

Sheila Morago, executive director of OIGA, said the number accounts for dollars generated from in-state use of facilities as well as out-of-state visitors.

“If you think about it, that’s new money that would not be coming into the state if it weren’t for those operations,” she said.

Morago said the numbers are also not necessarily dominated by the biggest gaming facilities. Casinos such as the Choctaw Casino Hotel in Pocola near Fort Smith, the Quapaw Casino in Miami and the Kaw SouthWind Casino in Newkirk are all bringing in significant cash from both in-state and over-the-border customers. It all adds up to substantial windfalls for the surrounding communities, which benefit from increased traffic for adjacent non-casino businesses and an expanded tax base.

But one key section of the study indicates that Oklahoma tribal casinos disproportionately impact rural areas. Of the 45.9 million visits, nearly 30 million were to casinos located in rural areas. Additionally, the industry created 48,942 jobs from annual operations and construction, and nearly two-thirds of those jobs were in rural districts.

The spillover from casino business in rural areas can often be even more impactful than around larger, metro-adjacent facilities. Larger facilities such as WinStar are essentially their own economic ecosystems featuring hotels, dozens of restaurants, stores and other non-gaming activities.

The benefits of such large-scale casinos come from dramatic tax base increases as well as massive employment opportunities.

According to 2015 figures from its website, WinStar World Casino and Resort employs over 3,200 people, which makes the Chickasaw Nation property one of the largest employers in the state, creating income for workers throughout southern Oklahoma. The operations and employees also paid nearly $325 million in payroll taxes, including more than $33 million in state income taxes.

“They get paid higher than minimum wage, and then they take their money and spend it in their local community,” Morago said. “Grocery shopping, rent and housing, day care — anything an average family would have to pay for.”

The study argues that as rural population numbers stagnate and more Oklahomans relocate to population centers for employment, employers such as the gaming facilities create opportunities for those who choose to remain in smaller towns.

Morago said the study is made available to the general public and distributed to legislators, the Department of Commerce and other government entities. It can impact public opinion regarding future facilities and be used for lobbying purposes, among others.

“We definitely make sure that the Legislature knows about it,” she said. “It gives them the information, because everybody has their own ideas, but we want people to know the exact impact we have.”

In early February, Morago attended the International Casino Expo in London, an annual conference where gaming entities from around the world discuss industry trends, regulations and the emergence of new markets.

Morago spoke at the Tribal Gaming seminar and said that despite the worldwide knowledge of WinStar as the largest casino in the world, most of the other attendees were surprised at the sheer level of activity throughout Oklahoma.

“The biggest takeaway was, ‘Really? Oklahoma?’” she said. “It’s interesting; gaming around the world is not like it is here in the United States. There aren’t many models that replicate what we do in terms of land-based, brick-and-mortar facilities. Much of the world has gone on to technologically based, online mobile gaming scenarios. They aren’t destination resorts until you get to places like Rio and Macao.

“While we don’t do that here right now, it’s always good to make sure that you understand those technologies. So if that’s the way it starts going in the United States, we’ll be familiar with that.”