In its 40th year, Full Circle Bookstore is thriving in the ever-changing book industry

Since Jim Tolbert founded Full Circle Bookstore in 1977, the book industry has been in some sort of turmoil or another, but 40 years later, Oklahoma City’s largest independent book dealer is thriving as its national competitors shrink.

Tolbert opened Full Circle as the result of what he termed a midlife crisis after years of helping reconstruct public companies in trouble, a background that would come in handy in the book industry.

When Tolbert opened Full Circle at the corner of 42nd Street and Western Avenue, next to VZD’s Restaurant & Bar, the B. Dalton Bookseller and Waldenbooks chains were driving business away from independents to indoor malls.

A fire at VZD’s forced Full Circle to move to the third floor of 50 Penn Place in 1980, and by the time Full Circle moved downstairs to its current location at the turn of the century, big-box retailers like Borders and Barnes & Noble were coming to town.

“Borders was the best competition we had against us,” Tolbert said, noting that it was founded in Michigan by true fans of literature. “There was culture in Borders that respected what they were selling. I’ve never felt the same at Barnes & Noble. Borders got heavy into music, and then the music industry completely turned over and they were stuck with all this empty real estate.” 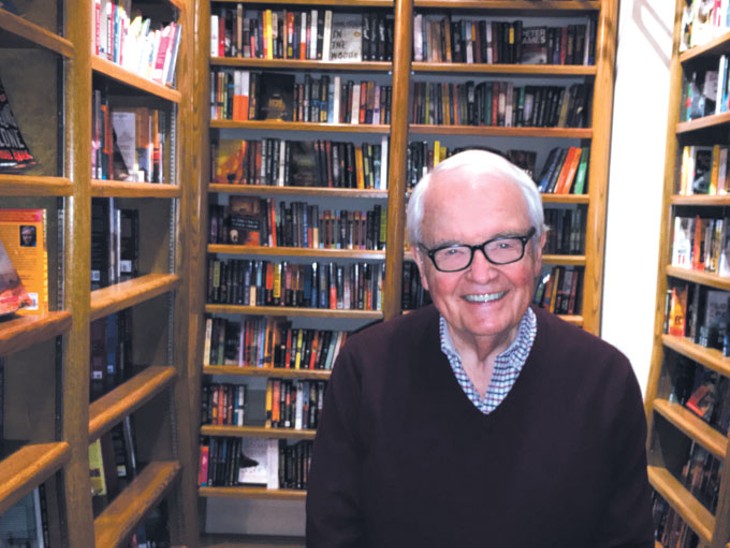 The rise of the big-box retailers forced innovation on Tolbert’s part. He engaged in what he described as “sophisticated work for a little bookstore” and did a series of customer focus groups and surveys.

“We discovered that we had a loyal base that wanted to be recognized,” he said.

Full Circle implemented a loyalty program called the third floor club. He also began to place an emphasis on customer service, deliberately hiring staff that are avid readers and passionate about literary history.

“The chains didn’t worry too much about hiring people that were readers or not, just those willing to come to work,” Tolbert said.

The move downstairs also led to the addition of the Garden Café, which doubles as an event stage. Tolbert said Full Circle hosts an average of five events per week —book signings, musical performances and even groups like a Spanish meet-up club where strangers can speak in their native tongue or get practice in a new language. A monthly “new ink” book signing combines 5-10 local authors to increase the reach of burgeoning writers.

Tolbert said events have been key in helping draw people to the store that otherwise would’ve never stepped foot in it, like the 400 to 500 people who showed up for actor Bruce Campbell’s book signing in September. It’s a new generation of supporters who have helped Full Circle weather the disruptive storm that is electronic books.

“When they began to become a major factor, I thought it was going to put us out of business,” Tolbert said. “It has peaked in number of titles and market share nationally and even declined in the last two years.”

As Amazon continues its horizontal integration to seemingly affect every aspect of commerce, it’s easy to forget that it started solely as an online book dealer.

“[Amazon is] not as aggressive in [book] pricing now,” Tolbert said. “They see it more as a profit center, not a market builder.”

Tolbert said membership in the American Booksellers Association has increased in each of the last three years, and Full Circle indirectly fostered Midtown’s Commonplace Books.

Commonplace Books owner Ben Nockels came to work at Full Circle with the intention of owning a bookstore, Tolbert said.

“Well, he wasn’t going to own this one, so we gave him council and advice, and eventually, he opened Commonplace earlier this year,” he said. “He’s filling a niche, and that’s what happening in the growth in the business — it’s niche-based.”

Tolbert said that he hasn’t given any thought to a line of succession for Full Circle, only that he’s focused on making it as great as it can be in the immediate future. A new three-year lease on its location begins in January.

In addition to Full Circle, Tolbert has been heavily involved in develoment in Bricktown since the 1980s and was one of the leaders of the Myriad Botanical Gardens project, which continues today with upcoming Scissortail Park. Tolbert’s civic leadership led to an unsuccessful run for mayor in 2004, losing to Mick Cornett.

He credited Cornett with the vision that primed Oklahoma City to host the New Orleans Hornets post-Hurricane Katrina, which laid the groundwork for the arrival of the Oklahoma City Thunder.

“I don’t think I could’ve done those things because I didn’t have that insight and those contacts,” Tolbert said of Cornett. “It was the first time I realized that Mick was doing a better job than I would have, and there have been a few other times since then too.”

Just as the artist-designed fiberglass Buffalo named Pearl stands guard outside Full Circle, Tolbert is proud his bookstore has provided a place for Oklahomans to take self-effacing pride while also showing that Oklahoma City is more than cowboy hats and rodeos.

“She is the symbol of our interest in Oklahoma City and Oklahoma,” Tolbert said. “Having a bookstore and role in the community has been very special for me.”