In Oklahoma, where the misuse and abuse of opioids is an escalating crisis, safe disposal is key to prevention 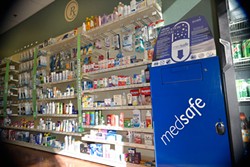 Pharmacists like Phong Hoang take pride in being drug experts, knowing everything about medications and answering their patients’ questions. When patients asked where to dispose of unwanted prescription medications, including controlled substances, Hoang’s response wasn’t always what his patients were looking for.

For years, police departments across the country, including ones in Oklahoma, have accepted old prescription drugs so they can be disposed of safely. Drop boxes placed in police station lobbies kept medications out of landfills and waterways, but also away from potential abusers.

“What I’ve learned from patients is that they are hesitant to do that,” Hoang said from inside Edmond’s Creative Care Pharmacy, where he serves as co-owner and manager. “They have medications, but bringing them to a police station is kind of scary, especially if they have narcotics.”

About two months ago, Hoang answered questions on safe disposal by pointing to a MedSafe collection receptacle placed near the entrance of his pharmacy. Resembling a mailbox, the blue receptacle can be used to dispose of unused or expired controlled substances, non-controlled substances and over-the-counter medications. It even accepts liquid medication at 4 oz. or less.

It didn’t take long for patients to begin unloading unwanted medicine into the receptacle. Some patients even arrived at the pharmacy with large bags full of outdated prescriptions. After the pharmacy posted about the receptacle on its social media platforms, locals arrived utilizing the service made possible by a federal and state grant.

“There seemed to be a trend of people just not knowing what to do,” Hoang said. “They weren’t throwing them in the trash. They were holding on to them, but they wanted to find a way to safely dispose.”

Safe disposal of prescription medicines, including opioids, has long been a drug abuse prevention tool pushed by law enforcement, medical professionals and organizations focused on the prevention of substance abuse.

In the past, people often disposed of their unused medicine by throwing it in the garbage or flushing it down the toilet. Those methods of disposal can enter local waterways and harm the environment. Another key aspect of prescription drug drop boxes is preventing youth and addicts from getting their hands on those medications.

“A very common place where addicts feed their addiction is stealing it out of home medicine cabinets of someone they know,” explained Mark Woodward, Oklahoma Bureau of Narcotics & Dangerous Drug Control (OBN) spokesman. “It is critical that we don’t leave it laying around. Sometimes all it takes is one pill that can lead to a fatal overdose. We know that lives are saved just through these small efforts by individuals and communities to get rid of that medicine they no longer need.”

When it comes to overdose deaths, more than four out of five involve prescription painkillers in Oklahoma, according to the Oklahoma State Department of Health. In July, the federal Substance Abuse and Mental Health Services Administration ranked Oklahoma No. 1 nationally for non-medical use of painkillers for all age groups 12 and older during 2012 to 2014.

Since its inception, Woodward said, around 165,000 pounds of medications have been collected from the OBN take-back containers and taken to Tulsa’s Covanta Renewable Energy where it was converted into clean energy.

Substance Use Prevention Alliance, the local coalition dedicated to addressing the epidemic of abuse and misuse of legal and illegal substances, has long encouraged the public to dispose of unwanted drugs through drop boxes at police stations and on National Prescription Drug Take-Back Day happening twice a year.

At community events, health fairs and schools, coalition members heard the public’s obstacles to safe disposal. While some shared hesitation to enter a police station, others explained their medications changed often and left them with unwanted medications piling up in their cabinets.  The public’s feedback fueled the coalition’s perusal of a federal Partnerships for Success grant through the Oklahoma Department of Mental Health and Substance Abuse Services (ODMHSAS).

“We saw a lot of barriers the more we talked to community members,” said Karin Leimbach, a prevention coordinator for Oklahoma City nonprofit DCCCA and coalition member. “We wanted to reduce those barriers for people.”

This fall, through the grant, seven MedSafe receptacles were placed in seven pharmacies located in various communities in Oklahoma County.  These boxes are not unusual to pharmacies. Some Walgreens locations provide safe medication disposal kiosks. There is a convenience benefit for those with prescriptions who often visit a pharmacy frequently, said Leimbach.

The public’s reaction to the MedSafe so far has been positive, Leimbach said. At Bethany’s Don Coody Pharmacy, 34 pounds were collected from the MedSafe receptacle in its first month of use.

“That says to me that the community wanted this and they are using it,” Leimbach said.

The same is true for patients and visitors at Creative Care Pharmacy, Hoang said. He is a pharmacist with a goal to serve patients and the community, and the MedSafe receptacle serves both while also fighting the opioid epidemic. On the pharmacy’s front counter sits a stack of Take As Prescribed cards, an educational resource produced by ODMHSAS.

“Independent pharmacists like myself, I feel like we are more open-minded to try new things,” Hoang said. “We want to be a service to the community as much as possible.”

Print headline: Safe way; In Oklahoma, where the misuse and abuse of opioids is an escalating crisis, safe disposal is key to prevention.