Oklahoma offers some of the region’s best climbing inside and outdoors. 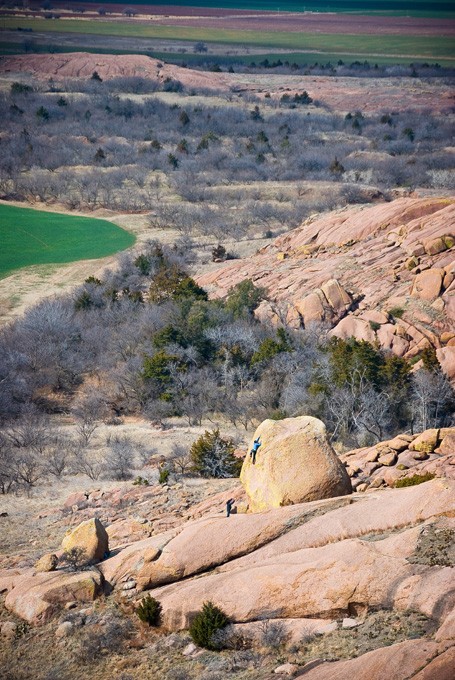 In 1979, famed mountaineer and writer Doug Robinson traveled to Oklahoma to teach rock climbing. After living in California’s Yosemite National Park during rock climbing’s golden age in the 1960s, he was so enamored with the quality of rock climbing here that he began returning each year.

“Something extraordinary had happened in Oklahoma,” he wrote in a 1985 cover story for Outside Magazine. “A band of world-class climbers had arisen out of the heart of flatness.”

That group included climbing legend Duane Raleigh, who later scaled peaks in the Alps, and Marion Hutchison, who is perhaps the state’s biggest climbing advocate today.

“There’s a lot of history in Oklahoma climbing,” said Hutchison, a petroleum geologist who lives in Norman. “And most people aren’t aware of it.” 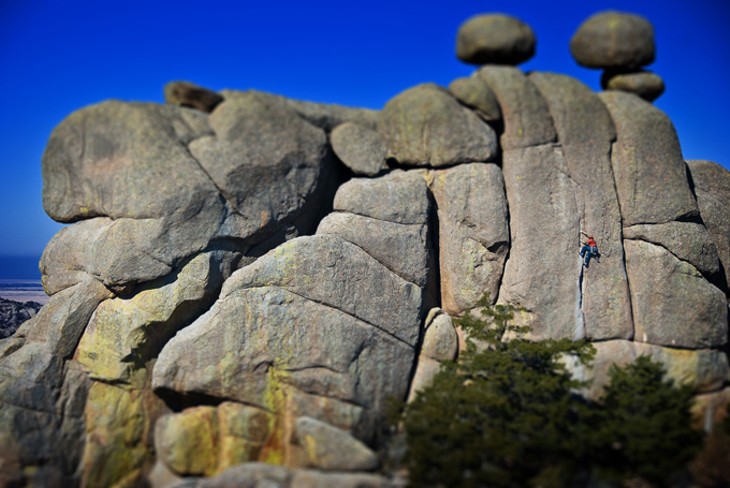 One of only a few granite sites in the region, the refuge’s climbing history dates back more than 50 years. Today, hundreds of high-quality routes have been established. They have difficulties in the 5.6 to 5.11 range on the Yosemite Decimal System, the sport’s standard. Most venerated are the traditional, ground-up routes, but in the last 10 years, some sport routes have been developed, emphasizing more gymnastic moves.

“It’s well-known throughout the country,” Hutchison said of the refuge.

Baldy Point, or Quartz, as climbers call it, rises 300 feet above the prairie. Its half-mile-long south face features some of the region’s best routes. The land was once privately owned by farmers Ted and Margaret Johnson, and some feared it might be sold to developers after Ted died in 1993. Access Fund and WMCC purchased Quartz in 2001 and immediately donated it to the State of Oklahoma.

Robinson called Quartz the Tuolumne of the Midwest, comparing it to the Tuolumne Meadows in Yosemite. Every year, two events — the Spring Fling and the Fall Gathering — are held at Quartz. Climbers reunite, reminisce and complete service projects around the sites, Park Naturalist Sue Hokanson said.

Robbers Cave in southeastern Oklahoma features sandstone routes and boulders, and Tulsa’s Chandler Park, where Hutchison learned to climb as a boy, is considered the state’s limestone bouldering mecca. Bouldering is a form of climbing done without harness or rope, typically less than 30 feet off the ground.

Hutchison doesn’t climb as often as he used to, but he looks forward to teaching his 8-year-old son.

“Climbing gives you a lot more than physical activity. There’s a real sense of accomplishment and confidence that you build in yourself,” he said. “I’ve seen it in just about everybody that I’ve ever met or known when they begin.”

The sport’s popularity is rising, and indoor climbing gyms have blossomed in Oklahoma City, Norman and Tulsa.

“The nice thing about indoor climbing is you have a controlled environment to learn the fundamentals before going outside to experience that additional risk,” said Aaron Gibson, who owns Climb UP, a 12,000-square-foot indoor climbing gym that recently opened in Norman at 2701 Washington Drive, with his wife Lisa.

With the convenience of indoor gyms and a new generation of climbers drawn to the sport, the state’s rock climbing community is thriving, said Andy Chasteen, operating manager at Rocktown Climbing Gym, 200 SE Fourth St., in Bricktown.

Rocktown operates in a 100-foot-tall former grain silo, offering lead climbing, top roping, auto-belay systems and a bouldering room. Its 70 indoor routes and 11 outside routes offer some of the highest gym climbing in the nation. An orientation course teaches novices climbing basics and safety techniques to minimize the sport’s inherent danger.

Rocktown Youth Mentoring, a local nonprofit, currently owns 91 percent of the facility. Its mission is to teach at-risk youth self-esteem and physical activity through climbing and one-on-one mentoring. Executive Director Steven Charles said about 90 children currently participate in the program.

The gym operates as a for-profit business to sustain the nonprofit organization, said Chasteen, who also founded 24 Hours of Horseshoe Hell, a climbing competition held annually in northwest Arkansas.

“I’m excited about the future,” he said.

Faced with potential environmental impact as popularity increased, rock climbing was threatened in 1993 when the U.S. Fish and Wildlife Service (USFWS) initiated an environmental assessment at the 59,020-acre Wichita Mountains Wildlife Refuge.

The process was controversial, as climbing had been allowed in the area since the 1940s, and Wichita Mountains Access Association (WMAA) was formed to represent climbers.

The USFWS concluded in 1995 that climbing caused no significant impact and could continue, subject to additional regulation. WMAA evolved into Wichita Mountains Climbers Coalition (WMCC) in 1996 to protect the refuge’s climbing resources and natural environment.

Today, refuge managers and WMCC’s board of directors, including local climbers Marion Hutchison, Andy Chasteen and Aaron Gibson, have formed a beneficial partnership.

“The climbers are really some of our best stewards,” said Ralph Bryant, the refuge’s deputy manager.

For outdoor climbers, the mantra is “Leave no trace,” which means disturbing the land as little as possible. There are some permanent anchors in the cliffs, and the WMCC has established a bolting advisory committee that recommends if and when new or replacement anchors can be drilled into the rock.

“Climbing is not a right,” Hutchison said. “Everybody appreciates the fact that we can climb here, so they go out and try to do the right thing.”

Climbing legend Duane Raleigh, who went on to become publisher and editor-in-chief of Rock and Ice Magazine, called Hutchison the Cesar Chavez of the state’s climbing community.

“Take him out of the picture and there would be little, if any, climbing at Quartz or in the Wichitas,” Raleigh wrote in 2009. “Once Marion latches onto a cause and gets under its skin, you couldn’t carve him out with a razor.”

Print headline: Rock on, Oklahoma offers some of the region’s best climbing inside and outdoors.