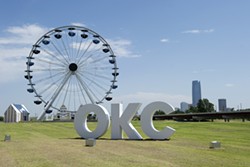 DeadCenter Film Festival, the host of Oklahoma’s best-known and largest independent film festival, adds a taste of the peculiar to its new fall fundraiser.

“We are making it a creepy, circus sort of theme,” said Kim Haywood, deadCenter director of programming and education.

“We love Halloween,” Haywood said. “We just want to create an event where grown-ups can go back and dress up and live that nostalgia.”

The celebration includes a DJ and dance party, a bar and roaming performers whom Haywood expects will be dressed like fortunetellers and gypsies. Guests must be age 21 or older. The event dress code is casual, though guests are encouraged to dress in costume, and a contest will award prizes for best individual, couple and group.

Though the annual film festival is the organization’s primary focus, Haywood said the organization also has an ongoing mission to educate about and foster filmmaking across the state. The funds raised by Circus Cinématique directly support these endeavors.

“People know deadCenter the film festival, but what they don’t know about deadCenter is that we have a huge education program,” Haywood said. “We travel around the state in the fall and teach filmmaking workshops and seminars to high schools, technology centers and some universities.”

The nonprofit’s prior fundraisers supported the annual film festival. Circus Cinématique represents an expansion in fundraising efforts as well as the continued growth of the organization and its educational priorities.

“We are also starting something called the deadCenter Institute, which is education focused for adults,” Haywood said. “We are starting that in November.”

DeadCenter also strives to inform young Oklahomans about filmmaking history and industry job opportunities. This often results in deadCenter traveling to students across the state, rather than vice versa, to work with an estimated 3,000 people each fall.

“We really like to go to rural communities where, specifically, film education and film art education is not available,” Haywood said. “I think that’s the most important thing for these students in rural communities to understand: Just because they are one of two or three kids in their school who are interested in film, that doesn’t mean there isn’t a network of other like-minded students around the state.”

She said students meet one-on-one with filmmakers and network with other students around the state.

“We see these students going on to film school locally, which is real exciting. We also see them working on projects together,” Haywood said. “That just helps us as well because our film base, our crew base, is here in Oklahoma.”

“People are grateful that we’re doing it,” she said. “Film education, and just art education in general in our state, we’ve lost [state] funding, and lots of these school districts are losing art. So the fact that we’re able to travel for them, to bring this program to them, they’re thankful.”