Inaugural Ride for a Cure is Sept. 17 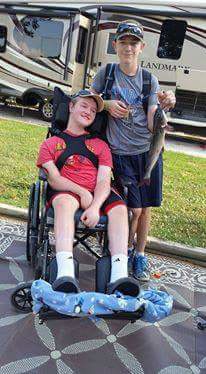 Two teens are taking the fight to a debilitating disease to Frontier City, battling muscular dystrophy on the rails of roller coasters. They want you to join them and help the cause.

The inaugural Ride For a Cure Day convenes Sept. 17 at Frontier City. The event includes games, arcades, rides, a raffle and a roller coaster marathon. The Muscular Dystrophy Association (MDA) will be the recipient of the money raised during the function. MDA and Coaster Club merchandise will be available for purchase and will also benefit the donations.

The event is the brainchild of Paul Davis of Edmond, and Jayke Menges of Wichita, Kansas. The two 15-year-old youths are co-founders of the Central Plains Coaster Club, a group of thrill ride lovers.

“We’re both coaster enthusiasts. We’re both into theme parks and stuff,” said Menges. “We kind of wanted to create a community of similar people with those similar interests.”

The two met through Davis’ Instagram account, which is home to multiple photos of thrill rides and theme parks. After meeting, Davis tossed an idea about creating an organization for their interests and the Central Plains Coaster Club was born in January 2015.

The duo wanted the Great Plains Coaster Club to not only serve as an avenue to celebrate thrill rides, but also as a vehicle to those with muscular dystrophy.

The Mayo Clinic describes Muscular Dystrophy as a group of diseases that cause progressive weakness and loss of muscle mass. The condition disrupts locomotion and may cause impairment of cognitive skills, as well behavioral, vision and speech problems. There are nine major types of muscular dystrophy. It may shorten lifespan and there currently isn’t a cure.

Davis’ older brother, now 17, was diagnosed with Duchenne Muscular Dystrophy (DMD) at the age of one. The Muscular Dystrophy Association defines DMD as a genetic disorder caused by the absence of dystrophin, a protein that helps keep muscle cells intact. The onset of DMD begins early in life and predominantly affects males.

“It’s the most progressive version of muscular dystrophy,” said Davis of his brother’s DMD. “At age seven he started having difficulty walking. At about age nine we had to put him in a manual wheelchair.”

Davis said when his brother was introduced to his wheelchair, his arm muscles and upper body were still functional. At about the age of 16, his brother lost use of his arms and possesses little dexterity in his fingers.

“Once you get to a certain age and most of your abilities are gone, after that it begins to hit your lungs and your heart,” said Davis. DMD also affects his brother’s cognitive ability. Because of his brother’s condition, Davis works with others in the muscular dystrophy community, including children with the condition.

“I go to a lot of things where I get hang out with kids like that,” said Davis. “He [Davis’ brother] has friends and sometimes we get to enjoy their company. I’ve gone to MDA camps during the summer, so I get to have fun with those kids. I’ve met some really cool friends through those.”

Davis said Ride For A Cure will be an excellent opportunity to not only raise funds to help defeat muscular dystrophy, but also to educate those unfamiliar with the condition.

Ride For A Cure Day will begin will the park opens at 10:30 a.m. on Sept. 17, and end at closing at 8 p.m. General admission to Frontier City costs $36.99 and will not be part of the donations. For information on the event visit CentralPlainsCoasterClub.com.