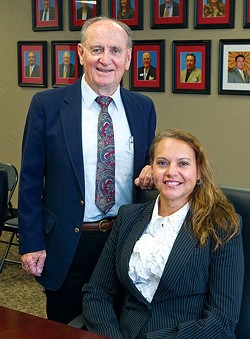 The old storefront location at 1212 N. Hudson Ave. (now home to Covenant Life Family Worship Center) was then a dilapidated building with torn linoleum floors and other disrepairs. The clinic saw less than 20 patients a day, with some waiting all day without being seen.

Forty years after opening its doors, the clinic is now a modern, 65,000-square-foot space that serves 19,000 patients from more than 220 federally recognized tribes every year. The clinic provides comprehensive services like medical, dental, mental health, nutrition, prenatal and pediatric care, among others.

Without the Oklahoma City clinic, many Native Americans wouldn’t have access to affordable health care. Of the 19,000 patients of the clinic, only 30 percent have Medicare, Medicaid or private insurance.

Although the nonprofit clinic has come a long way since it was founded in 1974, the need for additional services is still an ever-growing demand. Collaborative minds In the early 1970s, United Methodist pastors from Oklahoma City’s Skyline Urban Ministry asked Dr. Everett Rhoades if he would consult and participate in a new project to form an urban Indian health facility.

Rhoades was then a faculty member in the University of Oklahoma’s medical department and was active in Kiowa tribal affairs. He agreed to join as a volunteer physician during the Thursday evening shift.

“We started with relatively few patients, but that quickly grew over the first year, and on one evening shift, we saw 60 patients,” Rhoades said. “We demonstrated the need for this type of facility.”

This time period coincided with significant legislation developed at the national level. In 1975, the Indian Self-Determination and Education Assistance Act passed and allowed government agencies to provide grants and contracts to Indian tribes. This action reversed 30 years of the federal government doing away with treaties and other commitments to the Indian population. The following year, the Indian Health Care Improvement Act passed to address the poor health conditions of Native Americans.

Rhoades said the Oklahoma City clinic was a frontrunner in the national development of urban Indian health services.

Steady growth While Rhoades moved to Washington, D.C., to become director of the Indian Health Service from 1982 to 1993, the Oklahoma City clinic continued to grow.

A big breakthrough for both the urban Oklahoma City and Tulsa clinics was legislation in 1987 that designated these facilities as demonstration projects and provided substantial funding from the Indian Health Service, a branch of the Department of Health and Human Services that provides health services to American Indians and Alaska Natives.

This helped the Oklahoma City clinic break ground on its current building at 4913 W. Reno Ave. in 1994, just as Rhoades was returning to Oklahoma after completing his role in D.C.

“Between 1974 and 1994, we had become a first-class ambulatory facility with a wide range of services focused on primary care and a number of specialty services,” said Rhoades, who now serves as chairman of the board of the Oklahoma City clinic.

Robyn Sunday-Allen began working as a nurse for the clinic in 1995, just one month before the new building opened.

“It’s just been continuous growth since moving in [at Reno Avenue], so much so that we outgrew it in five years and started turning closets into offices,” said Sunday-Allen, who has been the clinic’s CEO since 2009.

By December 2011, the clinic had opened a second building at 5208 W. Reno Ave. to accommodate the need and named it after Rhoades.

“We’re already outgrowing that space and starting strategic planning for our next move,” Sunday-Allen said. “We register about 200 new patients a month in addition to the 19,000 we already serve.”

Compared with the rest of the population, Native Americans often have poorer health and shortened life expectancies.

These health outcomes are associated with higher concentrations of poverty as well as discrimination and a lack of cultural understanding from medical providers. Facilities like the Oklahoma City clinic work to fill these needs.

Oklahoma City Indian Clinic will host its 10th Annual Red Feather Gala to help fund its pharmacy expansion from 5 to 9 p.m. Saturday in the Great Banking Hall of First National Center, 120 N. Robinson Ave. United States Rep. Tom Cole will be honored with the Spirit of the Urban Indian Award.

With a new 7,000-square-foot pharmacy, staff will be able to increase the number of prescriptions filled each year by approximately 200,000 (from 200,000 to 400,000). During the evening, Indian artists Bunky Echo-Hawk, Brent Greenwood and Antonia Belindo will provide a live painting exhibition. All guests may participate in a Native American Friendship Dance.

Individual tickets are $125, and sponsorship levels are available. For more information, visit okcic.com or contact Angie Childers at 948-4900, ext. 621, or angie.c@okcic.com.

Print headline: Clinical needs, The Oklahoma City Indian Clinic  has seen continuous growth since its inception, and now it is time to expand the pharmacy.