Returning April 28 to 30, Norman Music Festival remains an influential cornerstone for independent music in Oklahoma — and it's still free to attend. 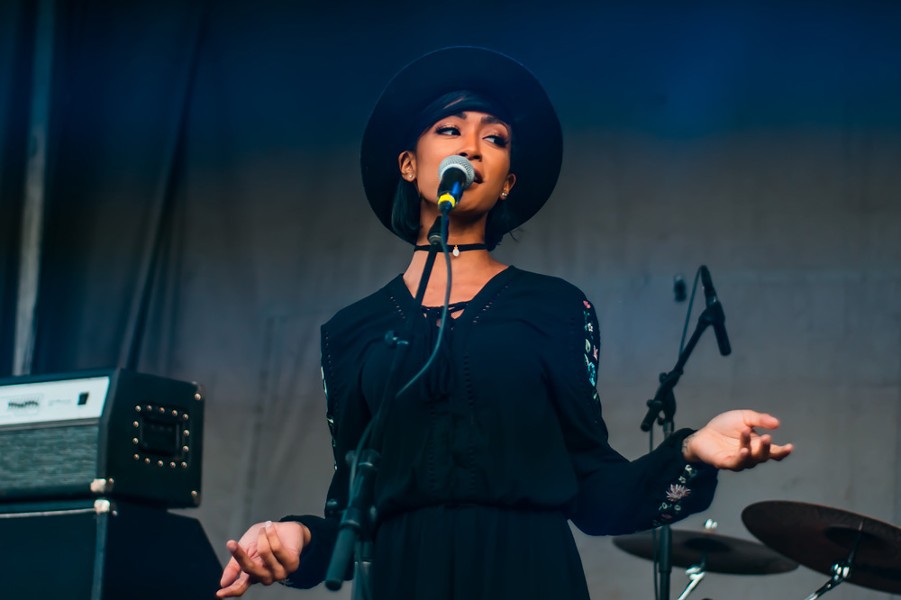 Some of the most up-and-coming artists in indie/alternative music have headlined Norman Music Festival since its inception, but that doesn't stop naysayers from voicing unsolicited advice every year. While there has been an overwhelming fervor in comment sections over 2022's big gets like The Drums, DIIV, Wet, and ...And You Will Know Us by the Trail of Dead, a look at Facebook's sharing history for the festival's announcement posts reveal yawn emojis and unimpressed commentary from the sidelines.


"It used to bother me when we’d get the inevitable 'who?' and 'never heard of them' responses to our lineup announcements, but it honestly just makes me giggle now," Joshua Boydston said, NMF's chairperson and graphic designer who has been booking headliners for over half a decade. "The caliber of talent we get as a free festival is frankly pretty insane, and seeing someone like Japanese Breakfast or Omar Apollo go on to play on Jimmy Fallon or headline Pitchfork Music Festival speaks to how it’s so worth coming to see these acts when they are playing at NMF to say you saw them back before they blew up."


Held along downtown Norman's Main Street in late April, Norman Music Festival is a unique, three-day annual production built on sponsorships, donations, and countless hours of volunteering. Though the odd scammer will try to convince unsuspecting music fans to the contrary, the event is and always has been free since launching in 2008. By working within its limitations, NMF has cultivated a thriving, grassroots alternative to the usual music festival formula.


"I think we just make the equation pretty simple," Boydston said. "We aren’t going to worry about selling x-amount of tickets, and booking what artists would sell y-amount of that. We set our budget with what the past years have told us we can spend and just try to make the best possible festival we can within those boundaries."


"It does leave a really empty space in the live music scene," Michelle Bui, board member and publicist, said. "This festival is an opportunity for a lot of people to perform when they can't throughout the year...I can personally say that without the festival, it's been a lot harder for me to know what bands are still performing and who the newcomers may be."


Norman Music Festival doubles as possibly the single biggest gathering of Oklahoma-based bands and musicians in the state, as they make up the majority of the event's over 300 annual performers. The event serves as a barometer for who's who in certain Oklahoma music circles, especially for those who get to play the major outdoor stages alongside festival headliners, but it also functions as a giant networking opportunity.


"For local artists, it’s a chance to rub shoulders with other Oklahoma bands and regional acts that can help elevate their craft and open up new opportunities for shows and more," Boydston said.


One such artist playing multiple stages this year is Norman-raised Lennon Bramlett, who creates electronic music under the name Bronte and is a member of officially selected local projects Community Girlfriend and Mad Honey.


"It’s so cool to be able to see and meet some of your favorite bands and artists right in your backyard," Bramlett said. "And it’s insanely inspiring meeting other local musicians that share a love for music."


Norman Music Festival's reputation for providing major opportunities to local talent is big. Rarely does a preliminary lineup announcement drop on social media that fledgling musicians don't cross their fingers in comment sections, hoping to make the final roster for the year. There are notorious stories about bands and artists who have tried to persuade organizers to get them booked or onto a bigger stage. Mutterings of gatekeeping are inevitable, but NMF has a solid track record of promoting diversity in its selections.


While it has always had indie roots — The Polyphonic Spree, of Montreal, and Dirty Projectors headlined the first three festivals respectively — NMF has also boasted acts like Grammy-nominated thrash metal outfit Power Trip and legendary multiple hall-of-famer Leon Russell. Of special note, however, is its heavy inclusion of hip-hop and neo-soul, and it is one of the very few large-scale music events in the Oklahoma City area to make the effort.


"It’s great to see artists like Nia Moné, Fire in Little Africa, and so many others representing hip hop and R&B," Bramlett said, referring to the OKC singer-songwriter and Tulsa collective respectively as examples.


Representation matters, especially since Norman Music Festival has proven to be one of the most influential events in music local to central Oklahoma. Inspired younger musicians like Bramlett have grown up alongside the festival over the past 15 years thanks to its family-friendly offerings. While some of the smaller indoor stages are local bar venues with age requirements, the biggest and loudest stages are open to everyone. For the ultra fan, optional VIP passes that guarantee access to the front of major stages as well as a food-and-drink lounge area cost only $100. With so many barriers lowered, Norman Music Festival is a risk-averse way to explore new sounds in independent music.


"It's just more fun this way," Boydston said. "It leans into the discovery aspect...You can have these pleasant surprises where a Portugal. The Man or Parquet Courts gets way bigger after the festival, and that's cool, but we are generally just booking cool artists that we like."