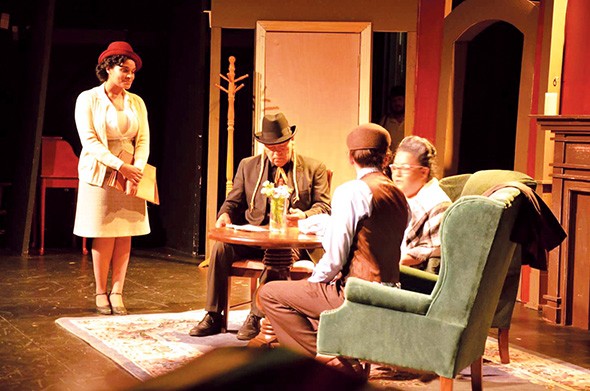 In 2010, Oklahoma City Theatre Company launched the Native American New Play Festival to showcase the creative talents of indigenous playwrights. In June, the festival staged Round Dance by Arigon Starr, and the production was the company’s most financially successful in five years, according to a press release from the festival’s directors, and State Representative David Perryman awarded it a State Citation of Recognition. Last month, the festival announced its separation from Oklahoma City Theatre Company.

The two theater companies are still on amicable terms with each other.

“We’re grateful for OKCTC and their hospitality,” Torralba said. “We’ve learned a lot from them. We look forward to having a good relationship with them in the future.”

“Our mission and our values are still the same,” Torralba said. “We’re hoping we can bring in more tribal participation, more tribal funding and really stick to the mission and values that we had before.”

The page titled A Creation Story on the theater company’s website elaborates on these values.

“We value the artistry and passion of our performers whose presence and participation fearlessly bring our stories to life,” the statement reads. “We value the skill and leadership of our directors, stage managers, designers, production and company personnel who guide and support us. We are inclusive to all audiences and all artists who share and contribute to our collective efforts.”

“We’re able to grow a little bit faster and really showcase that it’s an all-Native American company,” Torralba said. “We can put a little bit more of the tribal community up front.”

In recent years, the festival has worked to put more Native Americans in leadership and organizing roles and focused on getting more youth involved in theater arts by reaching out to schools in rural Oklahoma towns such as Anadarko. Moving forward, Torralba said, Indigenous Theatre Company plans to expand these programs.

"We’re able to grow a little bit faster and really showcase that it’s an all-Native American company."—Maya Torralba tweet this

“In addition to having the youth come to the plays,” Torralba said, “we’re going to have sessions where board members and playwrights and directors can go to the schools and the youth clubs and do sessions with them about writing and acting and really integrate the Native American community.”

The theater company’s ongoing mission is still to increase the pool of local Native American talent available and showcase their efforts.

“We are always searching for Native American or indigenous talent, actors, writers, directors, especially stage crew, lighting people, makeup, costuming,” Torralba said. “We recruit any and all that we can.”

Finding Native American and Indigenous people to work in technical positions has remained a challenge for the organization.

“Perhaps they haven’t had the opportunity to be backstage and to break in to Oklahoma City theater,” she said.

By focusing exclusively on Native American and Indigenous talent, Torralba said the newly formed theater company hopes to increase the opportunities they can offer.

The 10th annual Native American New Play Festival is scheduled for June of 2019. The festival features staged readings of several plays by Native American authors and a full production of a play chosen from those read at the previous year’s festival.

Round Dance, the story of a Native American veteran who moves from Oklahoma to Los Angeles after the Indian Relocation Act of 1956, was the first comedy the festival has produced. Previous productions have included Ranell Collins’ Dirty Laundry, about a 54-year-old divorcee caring for her terminally ill mother; Diane Glancy’s Salvage, chronicling a tragic cycle of vengeance triggered by a fatal car accident; and Vicki Lynn Mooney’s Hoop Jumper, focusing on a man whose past mistakes come back to haunt him when he applies for a government land allotment. Mary Kathryn Nagle’s Manahatta, drawing a parallel between 17th-century fur traders and modern-day stockbrokers, premiered at the festival in 2014 and is currently being staged by Oregon Shakespeare Festival.

While the winning play for 2019 will be either Neechie-itas by Jo MacDonald, Little Brother of War by Bret Jones, River of Blood by Ed Bourgeois or The Bone Picker by Carolyn Dunn, Torralba is currently uncertain about where the festival will be held. City Space Theatre at Civic Center Music Hall, the site for the 2018 festival, has been a good theater, she said, but the company would ideally like to find a larger venue. In addition to play readings, the festival also includes panel discussions, live musical performances, an exhibition of visual artworks and informational booths.

“We’re looking for anybody that has a space for us to work with us,” Torralba said. “We’re definitely inviting any and all of Oklahoma City and Norman.”