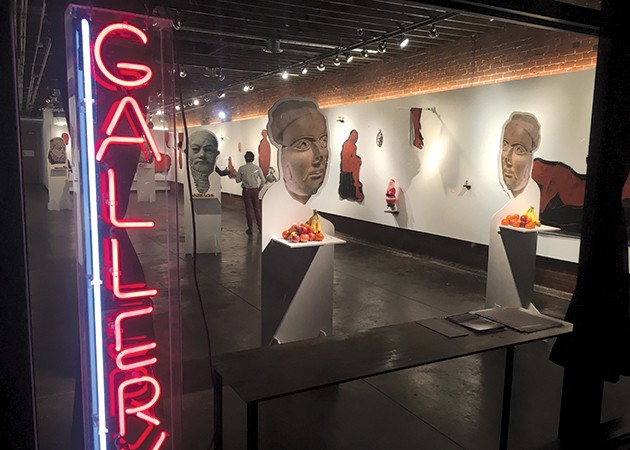 Daring ideas don’t generally have a long shelf life in the arts, so maintaining a gallery and organization based around avant garde poetry, visual art and performance seems unlikely to last beyond the gestation phase. Yet Individual Artists Of Oklahoma (IAO) has endured for 40 years by pulling in new and innovative talents from a broad spectrum of creative disciplines to create a thriving haven for bold voices.

Board president David Smith, aka spontaneous bob, said IAO will keep history in mind with all of its events throughout the year to remind patrons of the unique achievement of keeping a forward-leaning arts organization afloat for this long.

“My very first IAO memory was back in 1987,” Smith said. “I found this event listing in the Gazette about a poetry reading. Being an angsty 14-year-old poet/Goth kid, I was thrilled. There was a suggested donation of a dollar at the door, so I sat outside with a stack of my chapbooks, trying to sell just one for a dollar so I could get in. Finally, someone felt sorry for me and told me to just come inside. And when I walked through the door, my world expanded.”

Finding peers in Oklahoma City helped guide Smith deep into the poetry community, and IAO served as a critical gathering ground that still continues with Oklahoma Voices every first Sunday of each month in the gallery and an additional reading at Full Circle Bookstore, 1900 Northwest Expressway, the last Sunday of each month. Both events start at 2 p.m. and feature one poet as well as an open mic.

Maintaining a permanent address with enough room for its diversity of programming has always been a challenge for IAO, which has had six homes by Smith’s count.

“We started on The Paseo back in the early days,” Smith said. “Then it was on Classen Curve by the HiLo, which was when I was got involved in ’87. Then there was a brief, strange period when we were in French Market Mall way off in the ’burbs. From there, we moved to 1 N. Hudson [Ave.], which has since been demolished. Then we were one of the first tenants to move into Automobile Alley when they began renovating that area. Finally, we moved to Film Row just as that neighborhood was coming up. The first day we opened up this space, there wasn’t even a road outside.”

Board member Joe Hopper said that IAO lucked into an enthusiastic landlord in Chip Fudge who has helped develop IAO’s presence in the growing Film Row District. With a large space versatile enough to support film, dance, visual arts and poetry, Hopper said IAO’s continued relevance is thanks to its ability to enable an array of creative minds to guide the organization’s evolution.

According to IAO lore, the group was founded by three poets. Smith said the actual identity of two remains a contentious issue, but the third poet was, for sure, James “Frank” Parman. Smith called him a renaissance man looking for a home for experimental artists. He wrote a charter, a space was adopted, and the journey of IAO began with countless artists, poets, performers, filmmakers and volunteers all chipping in to keep this one daring idea from dissipating even as the culture changed, the economy rose and fell and gallery spaces popped up and fell away.

Premiere events like Biting the Apple have also shifted with the times, Hopper said, guided by the energy of the times and the artists who explore the outer reaches of culture.

“What sets us apart is I don’t know if there is anything we’d say ‘no’ to,” Hopper said; then he laughed because it was kind of a joke, but not really. “We like things that are unique and interesting. That is what we are most passionate about. Over the years, we have attracted people with many diverse ideas of what this organization should be and where it should go, and that has created a lot of really great things but has also made it harder to define what IAO really is. We’ve benefited from all these voices because it hasn’t pushed us in one specific direction.”

For Smith, the roots of IAO remain strong with the poetry community and its ability to reach the next generation of poet/Goth kids trying to sell chapbooks on a street corner. Its monthly readings are only one part of that mission.

“We’ve still got a vibrant poetry community,” Smith said, adding that one of his favorite events of the year is hosting the Woody Guthrie Poetry Group. “When you see our gallery full of joyful poets, like a weird family, it’s fabulous. Anytime you fill a gallery full of poets, the energy that comes out of it is awesome.

“What sets IAO apart as an organization is its diversity. IAO was not just a gallery or just a poetry reading; it was a bit of everything,” he said. “It’s an art space created by poets; it’s a home for artists that don’t have a home. As what was experimental 20 years ago becomes the norm today, we remain relevant by giving a chance to the next group of experiment artists.”