“There’s something about him that he almost feels like an overgrown kid,” he said. “One of the things that Will Ferrell does that’s really tricky is capturing that energy without coming off crazy.” 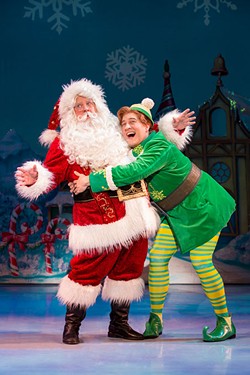 When thinking of classic Christmas movies, many conjure images of the stop-motion classics of the 1960s or older live-action staples like It’s a Wonderful Life or White Christmas.

A classic, by its very name, usually implies a cherished relic from years past. But every so often, a new story manages to break through and join the list of seasonal must-sees. A Christmas Story and National Lampoon’s Christmas Vacation did it in the 1980s. The ’90s had Home Alone and The Santa Clause.

In 2003, funnyman Will Ferrell likely cemented his name in the lore of Christmas cinema thanks to a memorable performance in family comedy Elf. For some, an annual viewing of the movie has become a family tradition.

The stage adaptation debuted on Broadway in 2010. Show choreographer Connor Gallagher has been working on Elf since the show began touring nationally in 2013.

“It’s funny; I remember seeing this movie in the theaters,” Gallagher said in a recent interview with Oklahoma Gazette. “You just never know what’s going to happen. There’s tons of Christmas movies that come out every year, so it’s cool that this one has such a following and remains so popular year after year.”

For those unfamiliar with the film version’s story, Elf follows Buddy, a human infant who accidentally makes his way onto Santa’s sleigh one Christmas and is raised by elves. Buddy grows up thinking he’s just like everyone around him, but as he advances into manhood, it becomes obvious that he wasn’t born to be one of Santa’s little helpers.

Buddy journeys to New York City in search of his long-lost family. While there, he discovers the outside world is not full of the sweetness and childlike exuberance found in Santa’s workshop.

The premise of the stage version is the same, but some minor changes were made to allow for more casting flexibility and to insert more music and dance opportunities into a story that originally didn’t feature an abundance of either.

The show begins as Santa reads a story to his elves. Gallagher said the stage production is told in the style of a pop-up book — not in that it is childish, but that it’s very visual.

One of the main reasons Elf has become a film worth revisiting is the strength of Ferrell’s man-child humor as Buddy. Gallagher said it was a role almost custom-fit for Ferrell.

“There’s something about him that he almost feels like an overgrown kid,” he said. “One of the things that Will Ferrell does that’s really tricky is capturing that energy without coming off crazy.”

Part of Gallagher’s challenge as choreographer was finding a way to make Buddy’s enthusiasm stand out on the musical stage when many of the other characters are singing and dancing too. Gallagher uses the idea that Buddy’s energy is so infectious, it spreads to everyone around him.

“The people of New York start to see the world through his eyes, and everything is a little bit more of a fantasy,” he said.

Gallagher said the choreography and script are altered a little bit each time a new company goes on tour. Like many other touring productions, the show adapts to its personnel.

Spenser Micetich is the latest to take on the Buddy role. Gallagher said Micetich has a natural eagerness that fits the character well.

“His Buddy is sort of like a bull in a china shop,” Gallagher said. “He doesn’t always know his size, like those dogs who don’t know they’re not puppies when they come up and sit in your lap. That’s what Spenser does so well.”

Director Sam Scalamoni asked Gallagher to join Elf as choreographer while preparing the new touring production several years ago. The two had worked together before, and Gallagher also had experience with NETworks Presentations, the producing company.

Gallagher said Elf is on its eighth or ninth company since he has been involved with the show.

“It is the same material,” he said, “but we try to improve upon it every year. Times change, people change; so even though this is our fourth year with the show on the road, it is very different and has entirely different numbers, even from when it was on Broadway.”

Gallagher, a native of New York, has been in or around dance and theater almost his entire life. Working as a stage choreographer who jumps from production to production means his life can lack a sense of routine, which he said can sometimes be a problem.

Returning to Elf every year has offered him at least some sense of comfort and consistency.

“Every project comes with its own challenges, and it’s nice to be able to return to a show that has a really sweet, sincere message,” he said. “It just reminds you of your family and the things that make you happy and are important. I think as artists, we just need that as much as possible.”