Dan Rowlett isn’t exactly sure how many cinnamon rolls Silver Dollar Concessions sells at Oklahoma State Fair each year, but it’s a lot.

“Gobs and gobs,” he said. “We start working in the morning, usually to a line, and we just keep going.”

Rowlett took over the business from his parents, and now his kids work with him, keeping the Edmond-based business rolling year after year.

“I think everyone has food in mind when they come,” she said.

Food is always one of the top three reasons people say they come each year.

Classic fair staples have a built-in audience, but sellers are always looking for new items to bring in customers. This year will see 20 new treats available to the masses looking for something outrageous to eat.

The Bacon Habit, based out of San Diego, attempts to outdo last year’s bacon-wrapped corn on the cob with something green. Owners Nathan and Amber Vandewarker wrap their beloved smoked bacon around asparagus and then season them with brown sugar and chili before putting them on the grill. 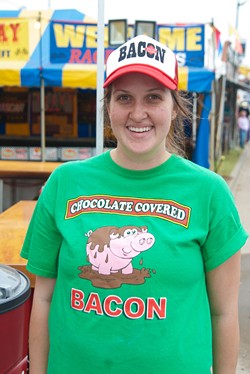 It’s hard to believe it has been 14 years, Kim Leiterman said.

With her husband Gene, Leiterman brought CocoFlow to the fair in 2002 with a simple menu.

“We started out just dipping strawberries and bananas in chocolate,” she said.

More than a decade later, CocoFlow’s offerings are a bit more complex.

This year, the pair unveils the Chocolate-Covered Bacon Walking Taco. Unlike other versions of the walking taco, which add a Mexican twist on a Frito chili pie, CocoFlow’s item swaps out tortilla chips for potato chips and then ladles on peanut butter sauce, candied bacon, dark chocolate sauce and sharp cheddar cheese.

“It’s crazy, but it’s something I’ve always loved,” Leiterman said. “That whole salty, fried, peanut butter, dark chocolate thing and then the sharp cheddar just brings it all together.”

Despite the shop’s name, Leiterman said she actually prefers savory to sweet, so in a dish so over-the-top in one direction, she likes to add a contrasting note.

The new bulgogi crêpe the pair will serve, continuing on the reception of last year’s Cuban crêpe, is much more savory.

Leiterman finds that adding new menu items is part of the fun of the fair.

“We have our loyal customers who come back every year, but we also like to change it up and bring in new people,” she said. “It’s the fair; we just give it a shot and see how people respond.”

Regardless of how crazy the dishes might seem, the real selling point is quality.

“We don’t order things and pour it out of a can,” she said. “It’s fun to do some crazy stuff, but in the end, everything we serve is high-quality.”

CocoFlow has plenty of experience, but it’s only the second year for Oklahoma City food truck Chef Ray’s Street Eats, and the menu is changing.

Owner Raymond Wilson builds on the success of last year’s chicken and waffles with three new chicken dishes. Spice lovers can try his Nashville Hot Fried Chicken, while sweet fans might want to sample Oklahoma Sweet Tea Glazed Fried Chicken, which is marinated in a sweet tea-based sauce for a quintessential Southern flavor.

But why choose one or the other? Ray’s third new option splits the difference with Sweet Garlic Chili Fried Chicken that combines sugar and spice with his deep-fried chicken.

Constant innovation by vendors is one reason the state fair invites them back each year. If they decide not to participate, there’s a waiting list of budding chefs eager to gain a spot at one of Oklahoma’s most food-focused events.

Rowlett said the people of Oklahoma City and the surrounding areas bring Silver Dollar Concessions back time and time again.

“We have a very good product that we take a lot of pride in,” he said. “It’s a family recipe developed over the years. We try our best to put out a product that we like and we would eat and be proud of.”

Silver Dollar might deal in bigger quantities than most home bakers, but it’s the quality of product that could be made in any kitchen.

“That’s one reason they’re so well received,” Rowlett said. “It’s not a pre-packaged thing. It’s large-scale, but we still make them like grandma would at home.”

And like grandma, there are lots of people eagerly waiting for Silver Dollar Concessions to pull the cinnamon rolls from the oven for another year at the fair.