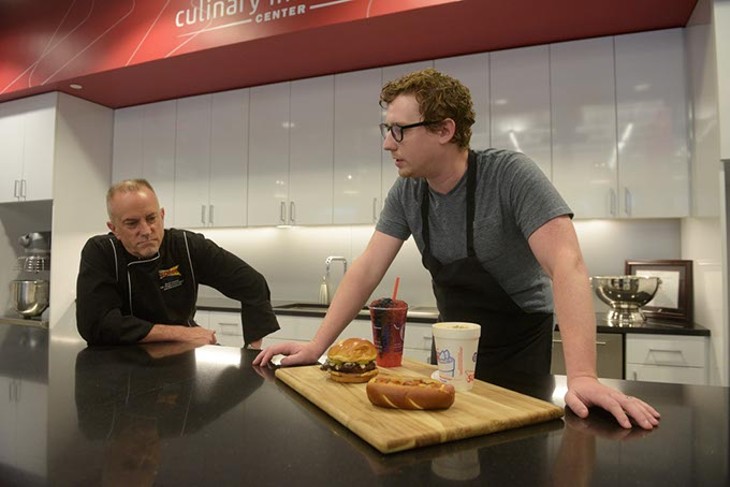 Across the country, Sonic has built its national brand as one of the most successful quick-service restaurants on the basis of bold and exciting flavors.

From recent full-time menu additions like boneless Buffalo wings to other wild ideas that never see the light of day — like a hot dog topped with peanut butter, bacon, pecans and caramel — it all begins as a kernel of a thought at Sonic’s Culinary Innovation Center located on the first floor of its corporate headquarters downtown, 300 Johnny Bench Drive.

Inside the gleaming 3,429-foot facility, Scott Uehlein, vice president of product innovation and development, is a trained chef with — surprise — a background in health and wellness who oversees a team of developers that create products based on their own ideas and work with the marketing department’s calendar.

Uehlein arrived at Sonic two years ago from Canyon Ranch, a company that specializes in health spas and resorts, not long after the innovation kitchen opened.

Uehlein admitted that the transition from health to fast food might be a head-scratcher to some, but he said his previous job working under a restrictive calorie structure only enhanced his ability to create flavor profiles.

“When you take fat and calories, you have to layer flavors by finding the balance —bitter/salty, sweet/ sour — and adding umami ingredients,” he said. “Sonic is known for bold flavors, so it gives us a lot of runway to work with.

Each product begins as an idea, either from the development team or the marketing department. For instance, Sonic will always unveil a new ice cream flavor in the summer.

The idea is screened during an online survey. If the idea received enough positive feedback, the development team gets to work in the kitchen that is constructed to replicate the equipment available to the more than 3,500 Sonic locations across the country. Uehlein and his team run cook-time studies and develop prototypes that will go to taste tests and then run operations tests before going to a test market in hopes of the item being added to the menu as a limited-time offer. 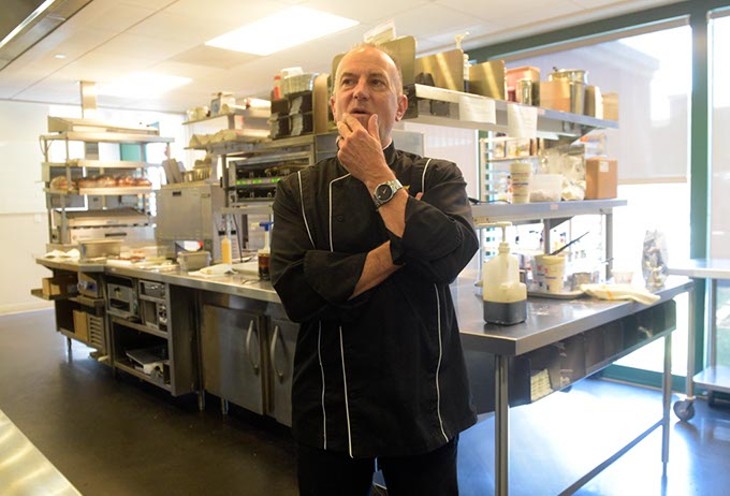 Product developer Jordan Denton brought in a grapefruit-flavored Sonic fizz, a carbonated beverage without artificial sweetener, color or flavor, which is Sonic’s play into the sparkling water market popularized by La Croix. It will appear on menus this spring and had about an eight-month window from idea to implementation.

It has been a much longer process for a product that Uehlein describes as “potentially disruptive.” It’s a blended burger that the development team refers to as a Sonic Slinger but does not yet have a final name. The meat patty is 25 to 30 percent mushrooms and is served on a bun that is somewhere between slider and full-sized patty.

“You should never get emotionally attached in the development world, but I confess that I’m emotionally attached to this one,” Uehlein said, noting that it’s an idea he brought with him from his health and wellness background and has been in production since he arrived almost exactly two years ago.

The Sonic Slinger classic with lettuce, tomato, onions and pickles is 370 calories, and a bacon-and-cheese-topped variety is 410 calories. By comparison, the slightly larger regular Sonic cheeseburger is 730 calories.

“People have been blown away at how good this tastes,” Uehlein said. “You’d never know that it has a bunch of mushrooms in it.”

Jason Acock, assistant manager of corporate communications at Sonic, said the Sonic Slinger recently finished product testing in August and might have limited availability in late spring or early summer.

The announcement of the Slinger received coverage in Food & Wine magazine, which Acock said is rare for the quick-service industry.

“I knew how damn good this product tasted,” Uehlein said, comparing the product ideas to raising children. “I hope this one goes to Harvard.”

Although the Slinger has nutritional benefits, the marketing around the new product will likely focus on its premium qualities.

For example, he said they ultimately passed on using Sriracha flavor, which has popped up as co-branded product in everything from potato chips to kettle corn.

“By the time we get through the validation process, it’s already on to the next thing,” Uehlein said. “Anything spicy is polarizing. It’s better to be broadly appealing.”

He said that the company likes to look forward while keeping an eye on current trends. When a product doesn’t work, it’s not thrown away. An avocado ranch sauce originally created for a pulled chicken sandwich has found its way to a breakfast sandwich, Uehlein said.

“No one is getting rid of french fries, but how do you evolve them? We already got a big menu, so you have to earn your way on,” Uehlein said.