The latest trend in health care — tiny hospitals with small overhead and big profits — is coming to the Oklahoma City metro in early 2019.

Earlier this month, Integris and Emerus leaders, along with municipal and community dignitaries, broke ground on the first of four microhospitals coming to the area. The first, Integris Community Hospital, will be located at 3391 S. Interstate 35 Service Road in Moore. The other three are planned for Del City, west Oklahoma City and northwest Oklahoma City. These small 24/7 inpatient facilities are designed to fill service gaps in growing communities located away from full-service hospitals, explained Vic Schmerbeck, Emerus executive vice president of strategy and business development. The Texas-based company serves as a strategic partner with Integris in this endeavor.

“What is a community hospital or what some people might call a microhospital?” Schmerbeck asked when speaking to a crowd gathered at the Nov. 1 groundbreaking for the Moore location. “We believe it is a transformative concept that allows great health systems like Integris to expand its reach into the community in settings that can be lower cost in providing services to the community.”

While microhospitals are popping up around the country, it’s important to recognize no two microhospitals are alike. The Moore facility will be a small-scale, fully licensed inpatient hospital with between eight and 10 inpatient beds for observation and short-term stay and provide an emergency department. The second floor will be dedicated to primary and specialty care physicians from Integris Medical Group.

“These microhospitals will offer 90 percent of the medical services many patients and their families will need,” said Bruce Lawrence, Integris Health’s outgoing president and CEO, when speaking at the groundbreaking — he will retire at the end of the year. “They will be opened 24 hours a day, 7 days a week and be equipped to respond to almost any medical emergency a patient would present.”

“The mission is bringing empathetic care to communities that are in need of care and bring that closer to where people work, live and play,” said Schmerbeck of Emerus.

Emerus is credited with developing the nation’s first microhospital. While other companies and health systems have replicated the model in communities across the country, Emerus currently operates more than 20 microhospitals and will surpass 60 by 2019. The partnership with Integris, first announced in 2016, signifies Emerus’ first venture in Oklahoma.

Emerus presents microhospitals as “a solution, providing entry points into markets where demand would not be able to support a full-scale hospital.”

“Culture means a lot to us as we think about partnerships and the communities that we serve,” Schmerbeck said. “We found a fit culturally with Integris.”

According to Advisory Board, a global firm offering research technology and consulting to improve health care performance, microhospitals should not be “all things to all people”; however, they should aim to meet up to 90 percent of the care needs of a community. While microhospitals have a set of core services, like an emergency department, pharmacy, lab and imaging, other services can include primary care, dietary services, women’s services and low-acuity outpatient surgeries.

Microhospitals are often around 15,000 to 50,000 square feet in size and are located within 18 to 20 miles of a full-service hospital, reports Advisory Board. 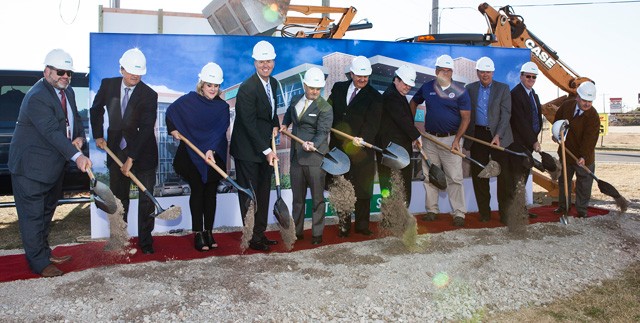 Integris’ microhospitals will be located in areas of the metro that have grown exponentially over recent years, said Lawrence. The future facilities allow Integris “to bring high-quality care closer to home to the residents that [they] serve.”

“We chose Moore as our first such location for a variety of reasons,” Lawrence said. “It is one of the fastest growing, most progressive, resilient communities in central Oklahoma. We have owned this land since 2002. We saw that the growth and prosperity in this area was going to be here for the long haul.”

According to Schmerbeck, Integris Medical Group offices are an added benefit to the microhospital model, as they allow locals to connect with health care professionals for routine check-ups and general care. Integris’ microhospitals will also provide emergency treatment and triage rooms. Each microhospital will employ between 50 to 100 people.

“This project is going to be very transformational in this market,” Lawrence said.

Print headline; They might be called ‘microhospitals,’ but Integris says the community should prepare for  a new approach to health care that’s fast, convenient and economical