Singer-songwriter Maddie Razook celebrates the release of her new solo album at The Blue Door. 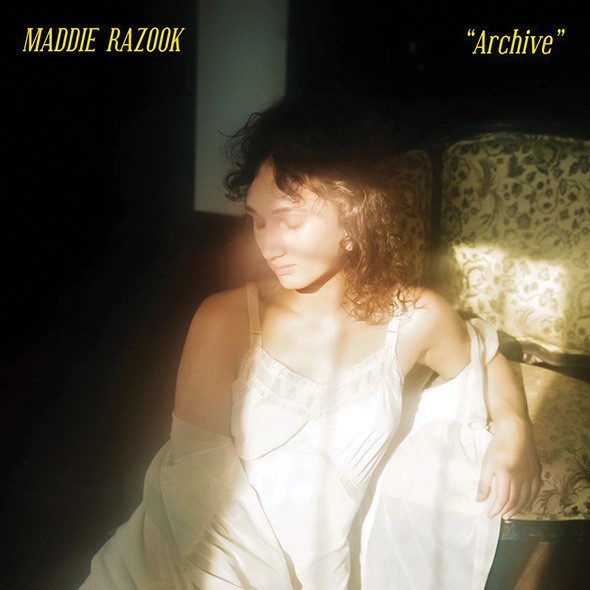 You might have heard her in Pigments or Lust, but Maddie Razook’s Archive is the sound of the singer-songwriter going solo in the truest sense.

“I decided that it was really important to me that every single element of the album was played by me alone,” Razook said. “I didn’t want to bring in any sort of extra musicians for any other elements. I just wanted to be able to record it all, just me, so when you’re hearing the album, the vocal harmonies or, like, six synth parts on one track or additional keyboard or whatever, that’s all just me. That’s sort of the common thread, and that’s how I really hope to maintain that sense of intimacy that people recognize in my music because my live shows are definitely very intimate.”

Razook celebrates the release of her latest album 8-10:30 p.m. Dec. 5 at The Blue Door, 2805 N. McKinley Ave. Archive includes the single “Spinning,” released in April, and a re-recorded version of “See Me” from 2017 debut Beneath the Skin along with eight previously unreleased songs.

“Each of the 10 songs represents a different way I’ve felt throughout the four years that these songs were written in,” Razook said. “The title, Archive, is the name of one of the tracks on the album, but it also represents, definitely, my feeling about this collection of music. My idea of it is, sort of, I’m ready to share it and then put it away. … Once it’s out of my hands and in everyone else’s ears, it won’t completely feel like mine anymore. It will sort of be tucked away in my memory and out of my hands, and that’s OK. That’s a good thing about it.”

While Pigments is currently inactive, Lust is scheduled to begin recording an album of its own in December. But Razook said releasing music under her own name is also an important part of her creative life.

“The community aspect of playing with other people definitely offers something that I don’t necessarily experience while playing solo, and I wouldn’t want to ever give up doing that in some form,” Razook said. “But just this project, my own project as Maddie Razook, has definitely been the one that keeps me the most grounded in my musical expression in a way, just because it feels so much like an extension of me and me alone.”

A conversation with a friend who recently started performing solo highlighted an intense aspect of the experience.

“She was like, ‘What is this feeling of just wanting to throw up when you play alone?’” Razook said. “I’m like, ‘It gets easier, but sometimes you will feel that way in, like, four years, honestly.’ It almost makes it harder if you have played in bands before. … You’re more vulnerable when you’re playing alone. I think I sort of crave that sense of vulnerability and that intimacy that you share with the people who are watching you when you’re playing alone, but I think it can be overwhelming for people sometimes to put themselves in that situation. Sometimes it’s the best feeling in the world to be able to do that and be vulnerable with people … but then, some days, if I’m not completely in the right headspace for it, it can feel … like I’m reading my journal to a bunch of strangers.”

In some ways, Razook said that’s exactly what she’s doing in all her projects.

“I’m just constantly writing lyrics, honestly, whether it be in a physical journal, or if it’s in the Notes app on my phone, just like jotting down things I hear, things I think about, and then sort of putting them together later, whatever,” Razook said. “It’s all very personal to me — all my lyrics are, regardless of the project — but the thing that’s been really cool about this project is, more so than any projects I’ve ever been in, people will come up to me after shows and be like, ‘I could really relate to that,’ or ‘That that really meant something to me.’ Maybe it’s even just that since it’s just me and my keyboard, they can hear the lyrics more. … It sort of hits you in a different way when you can really hear it all.”

“I have the ability and the skill set and the drive to want to do something
like this, and so I did it.”
—Maddie Razook tweet this

Her Lust bandmate Connor Schmigle recorded and mastered the album between December of 2018 and spring of 2019.

“It takes a long time to record an album like that, where every element is played by one person, so Connor was incredibly patient with me, which was really wonderful,” Razook said. “I trust Connor so much, both as my musical collaborator and my friend, and that was super essential to this project.”

Schmigle said the main challenge for such an intimate, personal album was preventing the layered synthesizers from sounding like “some spaceship instrument.”

“We tried to keep it as human as possible,” Schmigle said. “I felt like that was a good direction for the record. If it got too stiff or rigid … that doesn’t feel like Maddie’s music to me at all.” 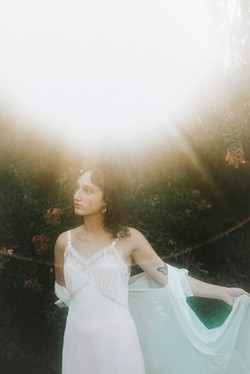 “That’s the best way to describe it,” Schmigle said. “It feels like an embrace. There’s a comfort to a lot of her music, and it feels like getting to sit down and think for a second. … I just don’t think this music would benefit from having anyone but her on it.”

Razook said the recording process taught her that she’s capable of doing things on her own, and she hopes hearing it encourages other people to do the same.

“I can make things happen, even if it takes a year to record the album or it takes a little bit of self-motivation to get up and do it,” Razook said. “I have the ability and the skill set and the drive to want to do something like this, and so I did it. … It’s something that I wish more people felt that they could do — maybe not in the sense of sitting down and writing and recording an album, because I don’t think everyone wants to do that or has the interest in that. But just in general, I feel like we’re all so much more capable of things than we believe. I’ve been really lucky because I have a wonderful community who is just constantly supporting me, and I hope that I’m doing that for other people as well.”

Sharing her highly personal lyrics in such an immediate way has also made that community feel larger.

“I’ve discovered that if I write stuff that I feel and I don’t try to make it relatable — I’m not sitting there like, ‘How are people going to relate to this?’ I’m just talking about what I feel, how I’m feeling — people just do relate to it because we’re all just human beings who feel things,” Razook said. “That’s been really rewarding to realize.”