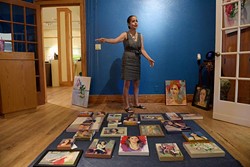 Though the move reunited Behnaz Sohrabian with her brother and sister, the Iranian-born artist felt like she touched surface of a new planet when she arrived in Oklahoma, a place she now calls her second home.

Sohrabian is one of three artists featured this month at JRB Art at The Elms, 2810 N. Walker Ave. Her exhibit, The Creator, runs through Aug. 28. John Brandenburg’s Noble Figures and Janet Massad’s Duets also are on display.

Like many modern Iranians, Sohrabian spoke English before moving to the United States in 2010. However, there is a big difference between knowing a language and being immersed in it.

“When I moved here, it was different because people talk fast,” she said. “Sometimes they don’t understand my accent, my pronunciation. Sometimes I panic and forget every word. But everything is good.”

Sohrabian apologizes for her occasional loss of words, but her paintings, often flush with color, tiptoeing the line between abstract and realism, communicate emotionally as well as any orator.

“I just speak through painting,” she said. 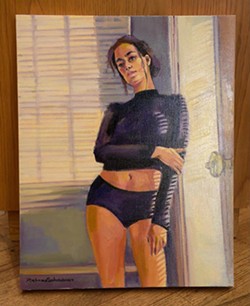 Sohrabian, a single mother of two, was born and raised in Tehran, Iran’s capital city. She is her family’s youngest child and began painting at age 10. She eventually earned college degrees in art and chemistry and later a master’s degree in art studies from a university in Tehran.

Sohrabian was still young when her brother and sister moved away in their late teens to continue their educations in the United States. She always meant to join them, but life kept her in Tehran for several more years. She went to school, got married and had children.

After divorcing, she finally made the move and began a new life.

“When I was a kid, it was my dream [to move to the U.S.],” she said. “I’ve been here five or six times before moving and making the decision to move here. I’m really happy I’m here.”

Most Iranian art galleries are censored by the state, so in one sense, Sohrabian was more thematically restricted before her move to America. Still, she said Tehran has a vibrant art scene with many talented creators. Many were barred from taking on some political and social matters in their works, but they found workarounds through abstraction.

Sohrabian, whose JRB exhibit expresses strong themes of femininity and individual strength, said in some ways, she was more expressive as an artist in Iran because the restrictions gave her something to say.

“There’s different ways you can say your words,” she said. “We have different artists who say their words in a very beautiful way.”

Sohrabian’s paintings on display at JRB look quite different from her earlier paintings done while in Tehran. Such a significant life move can have that kind of impact.

“Before moving, my style was abstract, figurative,” she said. “After moving, it’s kind of realistic.”

Her art might have been more abstract in Tehran, but the style still turns up today. The impact of color and light seem as central to characterizing her creations as the model’s expression.

Sohrabian begins her paintings with abstract structure and vague detail. She then adds lines to bring out light, shadow and dimension. She said her portraits and self-portraits are similar in that they portray women as beautiful and delicate but never weak.

“I think every woman is strong; that’s my idea,” she said. “Maybe just a few of them are not strong and they want to have somebody as a friend or a spouse to depend on. But the female, in general, I think is strong and independent.”

Many of the works in The Creator are named after ancient Greek and Persian gods to draw attention to each piece’s form and purpose. Sohrabian said her paintings primarily reflect attitudes she has developed through her life and experiences.

Another similarity they share is the paintings feature women who are alone.

“You can see maybe loneliness in my art,” she said. “Just one portrait, one figure. Most of the time I have a live model, but unconsciously, I convey my feelings and my thoughts on my canvas. It doesn’t matter who’s my model.”

Painting offers Sohrabian a sense of peace in a life that has sometimes been the opposite of that.

“It makes me calm,” she said. “I have different ups and downs in my life. I saw the [1979 Iranian] revolution when I was a kid, and then we had war for eight years between Iran and Iraq. I got divorced. It’s not easy in our culture.”

Sohrabian said she is thankful to live in Oklahoma, a state she said is quiet, peaceful and a great place to raise a family.

“Our culture is different; our language is different,” she said. “Because of that, I try to convey my feelings through colors and lines. It’s my language. I think it’s better to paint than to talk.”

JRB Art at The Elms