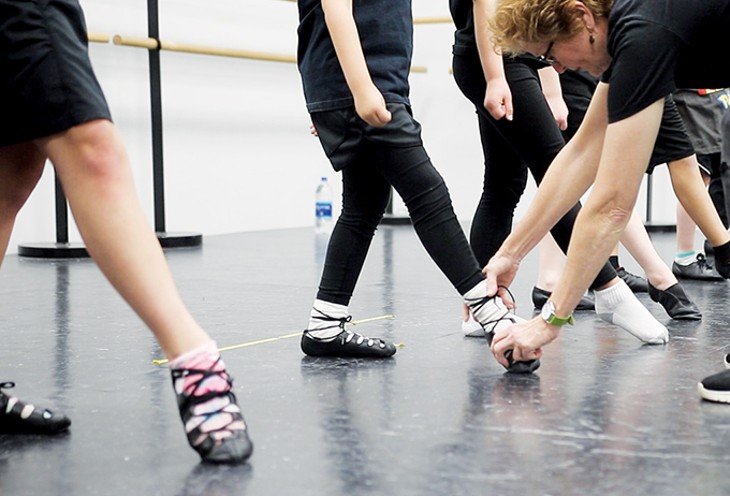 Students of Jean Hill have reaped the benefits of her multifaceted love of Irish culture and arts for decades. This appreciation is apparent in everything from her music selection to the ancillary cultural influences and the tenacity of maintaining one of the state’s only Irish dance outposts for over 20 years.

Hill began independently teaching seven students in 1998 and estimates that she has taught over 1,000 students since that first class at what is now Oklahoma Contemporary Arts Center at the state fairgrounds. Currently, she teaches classes in five different studio spaces across the metro and offers private lessons in her home studio.

Hill was born in Oklahoma and raised in a “quite musical” family, and her heritage spans the Atlantic and traces back to Irish, Scottish, German, Polish and Canadian bloodlines. Her grandmother played guitar, and her father taught her how to polka at a young age. In high school, she was part of a group that explored Native American culture. At one point, the family moved to Australia to follow her father’s job, and Hill credits the move for early childhood exposure to a mixing bowl of influences that began to shape her life’s work.

“I think early on, I had an appreciation for other cultures,” Hill said. “I’m so thankful that I got from my dad the opportunity to live in Australia. I always felt like there was a bigger world out there, from basic things like eating, drinking, the manners you’re expected to show your grandma in Tennessee or teachers from the British Isles.”

From Australia, a move to Boston brought Hill back to the U.S. Boston is also where Hill started dancing. At the time, The Chieftains, a traditional Irish band, was touring North America and Hill happened to see a flyer advertising Irish dance lessons in nearby Cambridge. The timeliness of this dual introduction laid the groundwork for Hill’s present-day mantra. It was music first, then dance.

Hill recalls always wanting to be a teacher and, while playing and dancing with an Irish band in Oklahoma, she was approached after a performance by parents who wanted her to teach dance lessons to their children. At the time, she felt as though her talents were only a hobby and she wasn’t qualified.

“They finally wore me down,” she said.

She then began seriously searching for someone to come to Oklahoma, an expert to guide her and her students forward.

She didn’t have much luck but continued to study and took five of the six-part certification exam in Chicago in October 2005, but she broke her foot while overtraining and was unable to complete the final step: actually dancing. She finalized the rigorous Teagascóir Choimisiúin le Rinci Gaelacha (“certified Irish dance teacher,” TCRG) certification process in January 2006.

With 20 years under her belt, Hill has created a program that spans the spectrum of Irish culture. Students don’t only learn the technicality of Irish dance; Hill always offers lessons in art and music understanding alongside the traditional steps.

“In Ireland, every child is given a tin whistle,” Hill said. “An understanding of the music helps you as a dancer. I’m a musician, and I love Irish music. It is hard for me to separate music and dance. I’m fascinated with Celtic artwork. I sew Irish dance costumes, so I explore the artwork a lot. When I do choreography, I consciously try to do something you see in artwork, [like] a spiral loop or crossing over and intersecting again.”

There are multiple dance commissions, and Hill is a member of the southern US region of Coimisiún le Rincí Gaelacha (CLRG, an international Irish dance organization). Every summer, she teaches camps with students across various skill levels, and she offers classes to 50-80 students from mid-August through mid-May. She tries to cap each class at no more than 12 students, but age and expectations play a part.

“If I have teenagers who are more casual and they don’t practice or compete, I will place them in classes with adults who are training for recreation or exercise,” Hill said. “I always have performance opportunities for everyone. If they like to dance or perform, they can do that in my school. If they want to compete, they can do that.”

She said people are still surprised that Irish dancing lessons are available in Oklahoma and since she rents her classroom space from local studios, it makes her less visible. She relies most heavily on word of mouth, Internet searches and public performances.

She likes to use modern music and features songs from artists like Lindsey Stirling and Ed Sheeran. Her students have performed as part of Arts Council Oklahoma City’s Art Moves program, introducing Irish dance to spectators in the Chase Tower lobby and the Oklahoma City Museum of Art gallery.

“Some of the benefits of Irish dancing is that it teaches focus and concentration,” Hill said. “In order to execute a step, you have to focus totally. Kids with ADHD respond well to it because it’s really structured. I [provide] feedback so they learn skills that help them, [and] it gives them confidence.”

This summer, Hill Irish Dance School welcomes students to its annual dance camp July 16-19 at The Dancenter Studio of Performing Arts, 901 N. Moore Ave., in Moore. Classes from beginner through champion-level are available. Tuition is $95-$105. To register for camp or classes, call 405-524-7322 or email jeanhill7322@gmail.com.