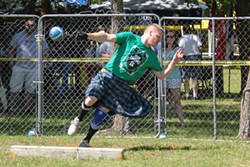 Under the threat of severe weather, a traditional fire ceremony planned to open last year’s Iron Thistle festival was canceled.

There was talk of thunderstorms and tornadoes, and the sky looked menacing.

Organizers waited as long as they could before making their decision. As luck would have it, the weather seemed to clear up immediately after they called off the ceremony.

The Thistle concluded the rest of its weekend without a problem.

“It was just a little muddy,” said Laura Ladymon, Iron Thistle entertainment chairwoman and publicist. “Being an April festival, and before that in March, we’ve had some crazy weather.”

The event is sponsored each year by United Scottish Clans of Oklahoma.

Organizers will attempt once again to open the fest with a free fire ceremony beginning 8:15 p.m. April 28. A cèilidh, a social event with traditional dancing and storytelling, will follow with music by Flowers of Edinburgh.

Scottish and Celtic-themed bands will perform throughout the weekend. Chicago Celtic punk act Flatfoot 56 returns after its Iron Thistle debut last year. It plays 5 p.m. April 29 and 8 p.m. April 30 on the main stage.

Additionally, this year’s fest welcomes a record number of traditional bagpipe and drum bands, some coming in from as far as Wichita, Kansas.

Aside from the music, other key draws to Iron Thistle are the Highland games athletic competitions.

Competitions include the tossing of a caber (similar to a large telephone pole) and the hammer throw, in which contestants fling a round, weighty metal ball. Athletics begin before the gates open each day and last until the daily awards ceremony, which begins around 5 p.m.

Other draws include a wide selection of Scottish fare and drink, archery, blacksmithing, storytelling and traditional dancing by The Ladymon School of Scottish Dance and other groups.

There will be plenty of animals on-site as well. Sheep herding demonstrations with Border Collies will take place for public observation.

“They’re hilarious,” Ladymon said. “We call them emo cows because they have that hair over their eyes. We have baby Highland cows that are coming out with their mama.” 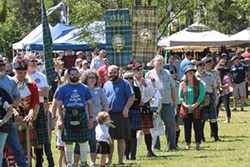 Its variety of attractions have made the event into a family tradition for many.

“There’s families that I don’t even know their names, but they come up and talk to me every year,” Ladymon said. “It’s definitely a tradition, especially for families around the Yukon area. It’s affordable, it’s family-friendly and there’s something for the kids to do.”

Ladymon danced in the first Iron Thistle 11 years ago and has been involved in the event ever since, stepping into a leadership role in 2012.

The festival has steadily grown by around 20 percent each year, which she said is exciting considering 10-20 years ago, Scottish culture seemed close to the brink of extinction in Oklahoma.

“At one point, I was the only Scottish dancer in the state,” Ladymon said. “It was really sad.”

Iron Thistle has done a lot to drum up participation in the Scottish and Celtic arts and reconnect a younger audience with things like Scottish dance and bagpipes.

Ladymon said more and more, the festival is looking like a torch passed between generations, a relieving sign that the culture will remain intact for years to come.

Still, Ladymon said participation does more than strengthen ties to one particular culture. Learning to respect cutural traditions increases awareness of others.

“Learning about one culture creates interest in a lot of other cultures and a lot of other people groups,” she said. “For me, it’s a really awesome feeling because you’re not teaching someone just to love wearing a kilt. You’re teaching them to love culture in general.”