James watched the entertainment genre’s popularity wax and wane over the years, but at age 53, he has indeed made a career of it. 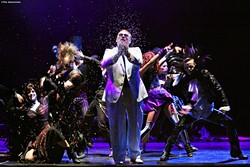 “I grew up in a small village,” James said. “One day, a magician performed at our elementary school; I knew immediately that was what I wanted to do with my life.”

And so he has.

James watched the entertainment genre’s popularity wax and wane over the years, but at age 53, he has indeed made a career of it.

He is The Inventor, one of seven acts featured in The Illusionists: Live from Broadway, a globe-trotting spectacular that includes mind-reading, levitation, illusion, comedy and innovation.

He followed the lead of inspirations such as Doug Henning, who innovated the genre through the ’70s and ’80s with his charismatic, made-for-TV takes on Harry Houdini’s classic Chinese Water Torture Cell and Metamorphosis tricks.

“Henning paved the way for what would come later,” James said. “He revived an interest in magic, and then David Copperfield followed in the 1980s.”

The industry fell into a slump as it hit the millennium, though stars — former and current — always found a willing audience in Las Vegas.

“I had some difficult jobs when I was just trying to pay the bills,” James said. “In the early years, I was trying to figure out my voice and understand what will sell.”

Things changed for him about four years ago, and he credits The Illusionists, a production that breaks the tried-and-true definitions and artistry in at least two ways.

“With magic shows, you’re usually focused on a headliner [and] watching the warm-up acts to get to the big name,” James said.

In this show, there are seven main acts: James, Dan Sperry as The Anti-Conjuror, Yu Ho-Jin as The Manipulator, Andrew Basso as The Escapologist, Jeff Hobson as The Trickster, Ben Blaque as The Weapon Master and Jonathan Goodwin as The Daredevil.

Three years ago, the crew got together for a three-week run at the Sydney Opera House.

“The synergy was incredible,” James said. “We broke box-office records in Australia.”

Lauded by press, the show now includes a cast and crew of 40 as it tours North America, with additional dates set on Broadway and in London, as well as a successful merchandising line that features everything from magic kits to logo magnets.

If the reviews are any indication, that is not hyperbole. The show is about two hours long, including intermission.

Print Headline: Revealing innovation, With its bold lineup of unconventional and boundary-busting talent, it’s no secret why The Illusionists is an international phenomenon.

The Illusionists: Live from Broadway