The Oklahoma County jail trust decided an outside jail administrator should operate the jail.

Oklahoma County jail will no longer be operated by the sheriff. While still in the initial stages, Oklahoma Criminal Justice Authority (jail trust) is moving forward with the process to hire an outside jail administrator to take over the operations of the jail.

There is no concrete timeline yet for the application or interview processes and no details regarding salary, but a job description is expected to be presented Sept. 9. Kevin Calvey, county commissioner and trustee, also suggested they aim to hire an administrator sometime in November.“The Authority hereby states that it will operate the Oklahoma County Detention Center by engagement of a jail administrator, to begin on a date determined in the future by the Authority,” reads the Aug. 19 resolution that passed 6-2 — trustee Todd Lamb was absent for the vote.

At an earlier jail trust planning session, the nine trustees discussed three options: retain the sheriff as the operator, hire a private company or hire an outside administrator.

Sheriff P.D. Taylor, a longtime critic of letting an outsider run the jail, voted against the resolution. During the meeting, he said he has been told by various leaders that his department is doing a “great job” considering the lack of funding it receives.

Trustee M.T. Berry also voted against the resolution. He said he felt the trust was moving too quickly and took issue with the wording, saying it made two decisions: one to hire a jail administrator and one to operate the jail. “I’m, of course, opposed to that motion,” Taylor said at the meeting. “I’ve sat here for weeks and watched people line people up here to discredit the sheriff and my employees. I hear a lot of criticism with no solutions. I think you all are really premature in going that route to hire a jail administrator when I’m not sure we’re ready or have the knowledge to operate a jail of this size. Hopefully this decision was not made before these meetings started. I hope you’re making your decision based on good faith.”

"The trust is now here, the administrator [position] is now here, so it’s just a matter of transitioning."
-Mark Myers tweet this

Trustee M.T. Berry also voted against the resolution. He said he felt the trust was moving too quickly and took issue with the wording, saying it made two decisions: one to hire a jail administrator and one to operate the jail.

“While I don’t have a problem with hiring a jail administrator, there are some other options for the way the county jail would be operated,” he said. “One, for instance, could be that the jail administrator would work for us with the sheriff to manage that jail.”

Calvey said the decision is not premature and the resolution is not perpetual. He said the trust could always make a different vote in the future.

“To me, it is not a hasty decision by anybody; it’s something that citizens have been asking for quite sometime,” he said. “I do think we need to press forward.”

During the meeting, trustee Frances Ekwerekwu requested the resolution be read aloud, but trustee chairwoman Tricia Everest said they did not have a copy. Counsel John Michael Williams then passed out copies.

The agenda item, while similar to the resolution, did not include the full language. Some of the trustees and none of the community members in attendance had seen the resolution before the meeting. However, Williams said there was no legal issue with voting on the resolution.

“Maybe I missed it, but I didn’t see the resolution until today,” Ekwerekwu said. “Maybe it causes pause, but personally, I’m in a place where I think that the change is honest. And we need to make decisions that will improve matters for the inmates at the jail, the staff at the jail, the public, all of us involved in this whole system.”

Several attorneys with years of experience working in the public defender’s office advocated for an outside jail administrator to fix the jail’s poor conditions. They said the ongoing issues with the jails need to be fixed and believed an outside administrator could more readily address them. They cited their client’s issues with medical care, hygiene, security, access to visitation and other poor conditions. 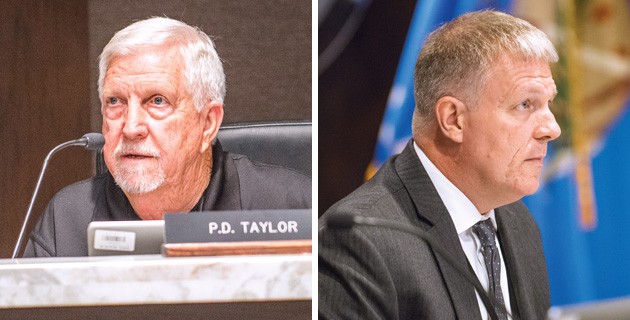 “The county’s budget is set for the detention center, so where’s that additional funding coming from?” Myers said. “And then, when that person comes in here, they still have the same amount of money the sheriff had. So where are the improvement costs going to be? How are improvements going to be made?”

The creation of the jail administrator position, Myers said, means the jail’s 67 Council on Law Enforcement Education and Training (CLEET) certified officers would lose their commission. Those officers investigate crimes, transport inmates and stay with inmates when they have to be taken to the hospital.

“When an administrator is over them, they will all lose their commission and no longer be police officers because they cannot be commissioned under a jail administrator. Those people are experienced, knowledgeable folks,” he said. “Between the sheriff’s office and the detention center, there are a lot of shared roles. The law enforcement officers who investigate crimes back there, which are about a 100 a month, they’re on track to investigate 1300 incidents this year. When they lose their commission, who’s going to investigate that?”

Myers said employee morale has fallen due to uncertainty and unanswered questions.

“People just don’t know what’s going to happen,” he said. “All these questions in the air and all the unknown make people feel horrible, and they’re leaving. … We have a 60 percent turnover with detention officers normally, but now what we’re finding is that our seasoned and veteran — our knowledgeable folks — because of all the uncertainty are walking out the door.”

Taylor is not opposed to having a jail trust, but Myers said he would prefer to maintain operations of the jail and work with the trust.

“That’s similar to what happens in Tulsa County. The trust has the purse strings, but the sheriff operates the jail,” Myers said. “It would provide for the employees a certain level of security and answer a few of the unknown questions. … He’s always wished that the county officials would’ve all just sat down and tried to figure out a direction and a way of working together to address the needs of the jail, but obviously, we’re way beyond that. And the trust is now here, the administrator [position] is now here, so it’s just a matter of transitioning.”