County commissioner Carrie Blumert would like to find a way to build a new jail to relieve serious ongoing issues. 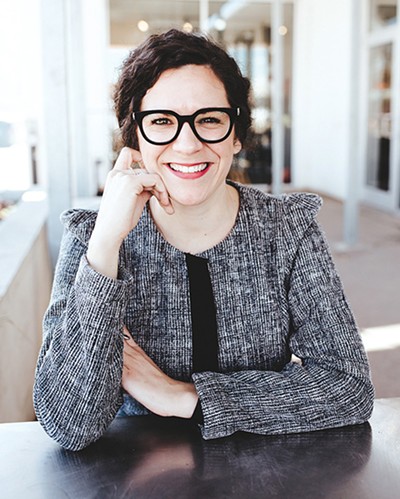 Recently elected Oklahoma County’s District 1 commissioner, Carrie Blumert ran for office after learning about the number of deaths in the county jail. Now, she’s hoping to provide as much information to the public as possible to pave the way for change.

“That’s been a big focal point for me during the campaign, and now that I am in this seat, it’s to really dig into that and figure out what is going on and how can we prevent these,” she said. “I am working closely with the sheriff and his deputies and figuring out what are some better processes we can put in place to protect the people we’re booking and make sure they’re getting the proper medical care that they need.”

Blumert was sworn in Jan. 2 but was meeting with two members of her staff and district attorney a week before to get information about current lawsuits regarding the county jail and juvenile center.

“A lot of that information was information that, as a candidate, I wasn’t privy to, so it’s finally nice to be in a position where I get to see the backstory on a lot of this stuff and finally dig into what caused these things,” Blumert said. “Most of the litigation we’re involved in as a county involves our jail.”

Many of the lawsuits specifically relate to jail deaths, which are caused by homicide, suicide and medical issues. Over the years, the jail has averaged about four inmate deaths per year out of about 45,000 bookings per year, said Mark Opgrande, Oklahoma County Sheriff’s Office spokesman.

Blumert has said that overcrowding and understaffing lead to increased violence and mental health issues within the jail, which all contribute to deaths.

The jail has a safety capacity of 2,800, but Opgrande said there are only about 1,200 beds in the facility. Currently, there are about 1,700 inmates. The reason for understaffing is due to funding and the workload that comes with an overcrowded jail.

“We hire a lot of people, but we also lose a lot of people because of the pay that they can get around the area. They don’t necessarily pay a whole lot more, but it’s also the job as well,” Opgrande said. “You make a little bit more money, but then again you only have about 800 inmates, so your job is not going to be as intense.”

The jail was also designed by architects who had never designed a jail before. A 2008 report by the U.S. Department of Justice’s Civil Rights Division found that they likely cut corners to lower costs and based on the design alone, the jail was not equipped to safely house individuals.

The building was never designed with any recreational or medical areas taken into consideration, Opgrande said.

“There’s only really one recreation area that was built into the facility, and that’s up on the 13th floor, which is an outdoor basketball court,” he said. “It’s just not nearly big enough to allow us, with the number of inmates we have, to get everybody out to be able to do rec every single day. It’s going to be every two days or every three days that we can get inmates out to that facility.”

Because of this, the jail doesn’t offer any programs like Alcoholics Anonymous or recreational activities, Blumert said.

“There’s no space for programming, so inmates spend a lot of time in their cell. I don’t know about you, but if I spent 23 hours a day in a cell, I would probably act outside of my typical personality,” she said. “You’d start to feel a little — not a little; a lot — stir-crazy and possibly do things that you wouldn’t typically do because you’re in such an inhumane environment in my opinion.”

Though there are protocols in place to help those who are not physically or mentally well enough to be booked, Blumert is seeking more information to see if there are ways to improve on them.

“Oklahoma County is the only county in the state that doesn’t have a portion of its sales tax dedicated to county operations.” — Carrie Blumert tweet this

“When an individual comes in, after they get searched and we take and store their property, they go to a medical assessment ran by [Turn Key Health Clinics],” Opgrande said. “They have a list of protocols they go through: taking blood pressure, asking questions, trying to figure out if this person has any predisposed issues. They’re trying to figure out if this is an individual we can take care of.”

What happens next depends on whether the person has a medical need that the jail cannot handle and if they are a violent criminal. People booked for nonviolent offenses can be refused and taken to a hospital, while violent offenders might be taken to the hospital and left with a guard.

In July 2018, the jail began using Turn Key Health Clinics to provide care to inmates. They have been able to stay on top of things and are easy to work with, especially as a local organization, Opgrande said.

Blumert shadowed former commissioner Willa Johnson on a tour of the jail during which they spoke to groups of inmates.

“One of the inmates said that the medical services had improved and the general way she’s treated in the jail had been improved,” she said.

Blumert wants to go back to the jail and talk to more inmates to get to know them and learn even more about issues that can be fixed with the jail.

“There was a woman in one of the groups we spoke with who seemed as passionate as I am about fixing this problem. She said, ‘I’m embarrassed that my city has one of the worst jails in the country,’ and I said, ‘We’re trying. That’s why we’re here today to talk to you and fix this,’” Blumert said.

In a previous interview with Oklahoma Gazette, Blumert said it was time to put the idea of building a new jail back on the table. The first step in that process was to make the public more aware of the issues that surround the jail. The biggest issue would be convincing taxpayers to pay for it.

“Nobody loves taxes. Oklahoma County is the only county in the state that doesn’t have a portion of its sales tax dedicated to county operations,” Blumert said. “We’re the only county that doesn’t have that cent revenue. We get most of our funding from property taxes, and some of our roads and bridges funding comes from gas tax. I am in support of a countywide, whether it’s a quarter cent or half cent, sales tax to build a new jail and then to support the ongoing operation.”

The jail has also been funded through the sheriff’s budget, which covers some of the bigger costs but doesn’t provide enough money for ongoing maintenance, Opgrande said. He said officials are open to the idea of a new jail, but the issue is with funding it.

“We’re always open to ideas, and that’s always been the biggest one on the table, but if you do that, how do you fund it?” he asked. “We need to work with county commissioners and city leaders. Something has to be done. There’s really no way around it. We just all have to figure out as a group what do we do and how do we do it.”

There have also been preliminary discussions about potentially including a mental health and addiction facility in MAPS 4 and putting it next to the jail. However, MAPS 4 is funded by Oklahoma City residents and the jail houses inmates from various other cities.

“Those discussions are super preliminary, but I know some people are considering trying to get those concepts in MAPS 4,” Blumert said. “I don’t know how that would work. That’s something we would need to discuss because we all need to have a part in this.”

Blumert wants to change the issues she has seen with the jail and hopes getting information out to the public will make people more willing to help pay for it. She believes fixing the county jail is positive for businesses, local communities and the state.

Blumert is finishing her 100-day agenda, which she said is mainly networking and building relationships with people who can work on resolving issues. She plans to post her agenda on her website and social media accounts once it’s finalized.