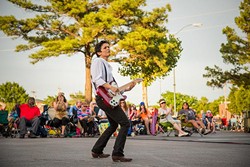 At Jazz in June, quality comes before quantity. The Norman-based music festival in its 34th year might not feature the largest roster of performers, but the event consistently books top talent that gives audiences something more to ponder beyond passive listening pleasure.

Norman-based National Public Radio affiliate KGOU produces Jazz in June each year. Jim Johnson, KGOU program director and host of the station’s The Weekend Blues show, said booking the fest’s acts is less about fulfilling a particular yearly theme and more about exploring areas within jazz and music that the event has not touched on before, or at least has not approached in some time.

“We may not have the most bands on the stage, but we try to get the most out of them,” he said.

As an example, Friday’s headliner is Dr. Lonnie Smith Trio. Smith is a New York-based jazz organist known for playing the Hammond B-3 organ. Johnson said part of their reason for booking the trio is because it has been so long since Jazz in June featured an organist.

In April, Smith was one of several musicians honored at a Kennedy Center tribute concert as a 2017 National Endowment for the Arts Jazz Master, considered the highest honor any jazz musician can earn. Other 2017 honorees included Dee Dee Bridgewater, Ira Gitler, Dave Holland and Dick Hyman.

“[Smith] is still going after it hard and heavy despite being a stalwart on the B-3,” Johnson said. “We’re fortunate enough to be able to bring him in.”

Saturday’s headline performer is Harold López-Nussa Trio. López-Nussa is a Cuban jazz pianist and, like the organist preceding him, Johnson said it has been a while since the festival featured any jazz performers on piano.

López-Nussa is considered one of the great performers in a proud line of Cuban pianists including Rubén González, Gonzalo Rubalcaba and Chucho Valdés.

“We’ve really got a young monster that we’re going to be able to showcase,” Johnson said. “He’s flying straight from Cuba to here and straight back.”

Thursday’s featured performance is from Mike Hosty & Jamie Oldaker. Johnson said guitarist Hosty is very representative of Norman’s music culture. He teams with drummer Oldaker, a key contributor to the historic and eclectic Tulsa Sound scene who made his name playing with Eric Clapton.

“This year will make the first year that [Hosty] has performed at Jazz in June,” Johnson said, “so it’s a long time coming and well overdue.”

Johnson said he loves Jazz in June because while it attracts many out-of-staters, it is one of the year’s biggest parties for Central Oklahoma’s jazz-, blues- and live music-loving community. The crowd is always energetic and engaged.

A broad appeal can partially be attributed to jazz’s unifying nature. Johnson said most quality musicians outside the genre have at least some jazz influence in their backgrounds. Elements of the music can be spotted all over contemporary rock and popular music.

“What this music represents is something everyone can appreciate,” Johnson said. “To me, jazz is a fusion of musical influences more so today than maybe ever before.”