On the short car ride home from his brother’s choir concert, Jeremy Thomas, 13 at the time, heard something that changed his life.

“My dad turned on the radio, and he stopped at the jazz station,” Thomas said. “The first song I heard that just really caught my attention was a Herbie Hancock song called ‘Cantaloupe Island.’ I just loved the way that drum pattern went, and that’s how it got started. When I went home, I got my little radio and got tuned to that station, and I started listening to it. Then got hooked on it ever since then.”

Thomas, a multi-instrumentalist who started out playing drums in church and school jazz band in OKC, also plays bass, Hammond B3 organ and more, sometimes in the same set.

“I would probably say the Hammond is my favorite, but the drums is my first love,” Thomas said. “But I definitely love it all. … When I do bigger shows and concerts, I’ll go from the organ to the drums and then play some bass, and I’ll do some keyboards, some piano, do a little bit of talk boxing, I might do occasional singing every now and again, just to showcase the different talents and skills that we all have.”

Tony Williams’ drum pattern for “Cantaloupe Island” got Thomas listening, but hearing drummer Elvin Jones play with saxophonist John Coltrane on Man Made Miles got him “completely digging in and saying, ‘OK, I’m definitely playing this.’”

“It only had three songs, and the entire record is, like, 48 minutes long,” Thomas said. “I used to listen to that CD every single night, and it went on from there. That’s what really hooked me. … I’ve still got that record to this day.”

“Keeping the music relevant is just keeping your eyes and ears open.”
—Jeremy Thomas tweet this

Thomas said Washington — who worked as musical director for Kendrick Lamar’s To Pimp a Butterfly and whom Allmusic.com called “a composer and arranger of dizzying potential” — is also hooking listeners with the sensational drums in his music. In Washington’s case, his band’s two drummers add an element of excitement, especially live.

“When people know there’s two drum sets on stage, it’s like, ‘Oh, wow! This is going to be kind of a situation,’” Thomas said. “James Brown always had two drummers. … Kamasi’s music, he’s definitely got this jazz foundation, but you can hear some spiritual influences — he has the choir and things like that — and then he’s got some elements of hip-hop in his music as well, but he’s coming from that jazz place.”

In an interview with The Guardian, Washington explained his musical philosophy.

“I never had a problem moving between jazz and hip-hop,” Washington said. “People like to compartmentalize music, especially African American music, but it’s really one thing, one very wide thing. I mean, it’s like all those great records by Marvin Gaye and James Brown back in the day — there are tons of jazz musicians playing on them. When I first played some Coltrane-type stuff on the Pimp a Butterfly sessions, Kendrick got it immediately. ‘I want it to sound like it’s on fire,’ he’d say. That’s the kind of common ground that the best jazz and the best hip-hop have.” 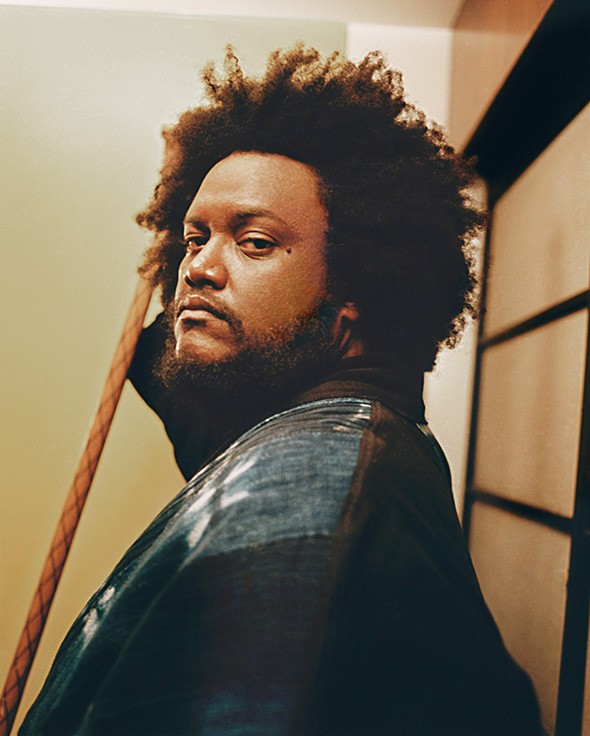 “I just took the popular songs off the radio and took out the lyrics and kind of left the hooks and just soloed over it,” Thomas said. “At the time, it was to really get people our age and younger that may not have ever heard jazz or don’t really know what jazz is but then let them hear a real piano or a Hammond B3 organ over some of their favorite songs so they recognize the songs, but now they’re hearing some live instrumentation over it. And then the older people that are used to hearing more live instrumentation in music, it’s kind of pulling them to what’s going on currently today. So it’s kind of like pulling in different generations coming into one common place.”

His 2013 album I Am features Thomas on nearly every instrument and guest appearances by OKC hip-hop artist Motiv and R&B vocalists Zack Gaddis and Shanna Proctor Dejear. In March, Thomas is planning two releases: a big band album dedicated to University of Central Oklahoma jazz program founder Kent Kidwell who died in 2018 and a tribute to Los Angeles rapper Nipsey Hussle, who died last year.

“Hip-hop influences me in a different way,” Thomas said. “When I got into hip-hop producing, I realized that when I first started off I was doing things way too complicated. Hip-hop is very heavily based off of drums and bass, and it’s very similar to funk music. … James Brown and Clyde Stubblefield’s ‘Funky Drummer’ is one of the most sampled tracks of all time. I’m a huge James Brown fan, so when I started listening to hip-hop and R&B, it was like, ‘OK, I see what’s go on,’ so it’s kind of like taking what’s been done and kind of bringing it back to its roots a little bit. Hip-hop has inspired me to really stay relevant.

“Keeping the music relevant is just keeping your eyes and ears open. I’m always listening to what’s out there. When I was little younger, I used to go to clubs and listen to what the DJs were playing.”

While Thomas initially thought younger audiences would be most interested in his Thomas Street project, its appeal was wider than he expected.

“What’s crazy is I think a lot of older people like it just as much, if not more, than the younger people, which was to my surprise actually,” Thomas said. “But at the end of the day, no matter who you are, how young or old you are or what color or background you come from, people just like the music.”

“The number one thing that we want to do is bring great quality and great excellence of music to Oklahoma,” Thomas said, “and show the people that they’ve got some good musicians here that can play.”

Jeremy Thomas Quartet also plays a monthly show at The Skirvin Hotel, 1 Park Ave. The next one is 8 p.m. March 13. Visit jeremythomasquartet.com.