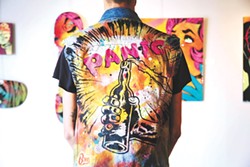 Since the 1950s, the jean jacket has represented American counterculture. First, there was Rebel Without a Cause and the coolness of James Dean, followed by Elvis Presley’s all-denim getup in Jailhouse Rock.

By the late ’70s, the jean jacket became a uniform for the punk rock scene, and the ethos continued even through designer trends for the ’80s and ’90s. Even in a contemporary sense, Glamour credits Miley Cyrus’ embrace of stylized jean jackets to moving her career from teen Disney star to the twerking rebel we know today.

For local artist Tony Thunder, 27, the jean jacket has been a symbol of cool since he was a child, when he would march around the house as a 3-year-old, wearing a Levi’s jacket with a sense of pride.

Thunder’s fascination with jean jackets followed him into adulthood when he and his friends would compete to find the most unique patches for the “coolest” jacket. Eventually, the artist side of him took control and he began using the jackets as a canvas.

It led to last year’s pop-up jean jacket show at The Paseo Plunge, 3010 Paseo St. The response to last year’s show was so overwhelming that the jean jackets are the subjects of a nearly monthlong exhibit at The Plunge that will take visitors literally underground, according to manager Charles Martin.

“[At the first jean jacket show,] we had everyone, even older people, 60 or 70 years old, coming in really interested,” Martin said.  “We had to do it again and make it bigger.”

The Jean Genie Jean Jacket Art Show Vol. 2 begins 6:30 p.m. Friday with an opening reception and will be on display through Sept. 24. The first show had four jackets, and the new iteration will have 10-12 with additional art on display.

Thunder, who grew up in Moore and attended Oklahoma City Community College for graphic design, has been a veteran of art shows since he was 18 years old. Much of his work takes the form of pop art, like a pixilated David Bowie in his Starman makeup or Donald Trump made to look like Heath Ledger’s version of the Joker.

The act of painting on a jean jacket is not as simple as it might appear. Thunder said it requires thick layers of spray paint as a base to prevent the fabric from soaking up all the color. Once the base layer is applied, Thunder adds paint markers and acrylic paint.

“It requires a lot of layers,” Thunder said, adorned with a black jean jacket with various ornate patches and buttons. “They’re actually pretty hard to write on. You can’t even find them at Goodwills because everyone wants a jean jacket.  They never go out of style and last forever.”

Artists Kris Kanaly, Sean Vali, Studda Budda and mysterious masked duo Holey Kids will join Thunder in the exhibit, which will be housed in the basement of The Plunge while the gallery space undergoes renovation.

“I don’t feel like I really belong in a normal art gallery,” Thunder said. “[The participating artists] are some of my favorite artists that the city should know about. They’re underground and should get the shine that most traditional artists get, and they will in time.”

The exhibit encompasses the entire bottom floor of the 28,000 square-foot Plunge building, which opened in 1933 as Oklahoma’s first community pool.  Even after The Plunge opened a year ago, much of the space is still under renovation.  Holey Rollers food truck is in the process of moving into a space on the first floor, which is eating into gallery space.

The jean jacket show will be downstairs, outside space used by artist George Oswalt, and continue into an unfinished room that will take on the character of the colorful DIY show.

“I love the fact we’re doing it underground rather than in the traditional gallery at The Plunge because it feeds into culture of underground rock and now we’re literally underground,” Martin said.

The opening reception features a live DJ with other works of art in addition to the jean jackets and patches available to customize your own jean jackets. After the reception, the jackets will move upstairs to another gallery until Sept. 24.

“I want it to be like a party. We want a party atmosphere, not like the stuffiness of a normal gallery,” Thunder said. “You don’t have to judge things and eat cheese. Be yourself, let loose and get rowdy.”

Martin said that the collection of talent on display during the show is an example of high-end DIY and the participating artists are among the most talented in the state and the connection to jean jackets is something that appeals to all generations.

“You will have people that will come out that are not necessarily huge buyers of art, but they like reveling in this scene,” Martin said. “Whenever people are coming through and see 15 skater or punk kids going into a side door of an art gallery, there is something really compelling about that, and people will come in just to see what is going on.”