They walk and work and live among us, distinguished no longer by a wreath of laurel wrapped around their heads but by the title derived from that symbolic accessory: poet laureate.

Jeanetta Calhoun Mish, Oklahoma’s new poet laureate, is an Okie everywoman, at once literary and accessible, straddling multiple worlds and then writing them down.

Appointed to the position in March by Gov. Mary Fallin, Mish will fulfill the obligations of her two-year term through regular speaking appointments and by bringing poetry to underserved communities throughout the state.

Mish’s appointment marks the latest culmination of her early poetic leanings, encouraged by the fact that her mother frequently read poets like Lord Byron aloud to her and she was hooked on poetry.

“I wrote my first poem in second grade, when my dog died,” Mish said.

Ever since this first “inciting incident,” to borrow one of the terms Mish used to describe the seeds of her poetry, she has continued to write searching poems that revolve around the themes of personal experience, loss and life in Oklahoma.

Despite her early interest in writing, Mish didn’t call herself a poet until decades later.

“I always wrote poetry, but as far as being a poet, someone who is publicly recognized as a poet, that didn’t happen until … my first book was published,” Mish said.

Tongue Tied Woman, Mish’s debut book of poetry, won the 2002 Edda Poetry Chapbook for Women Competition. She has since published three other books, including 2016’s Oklahomeland: Essays and her most recent poetry collection, last year’s What I Learned at the War.

For Mish, the road to poet laureate was long and winding. Before her first poem was published, she said she worked a series of working-class jobs: an aid in nursing homes and hospitals, a lab assistant and a bartender.

It’s often said that the mark of a true writer is simply the act of writing, and while poetry wasn’t Mish’s vocation during this period of her life, it remained a calling.

“I always turned to poetry whenever I needed to unburden myself,” she said. “When something was going on in my life that was difficult or unusual, I always wrote.”

Born in Hobart and raised in Wewoka, Mish said she later moved around to Texas, Ohio and New York, “looking for something, like a lot of young people do.”

Mish is also a scholar, having earned her B.A., M.A. and Ph.D. in literature. Now, she directs the Red Earth MFA program at Oklahoma City University.

In the world of academia, Mish read widely, taught freshman composition classes and learned a great deal about the other form that would occupy much of her writing career: the essay.

As a prolific writer of nonfiction essays frequently appearing in publications like Oklahoma Today, Mish said it’s all about suiting an idea to the best form.

“Sometimes I think I’m going to be writing a poem, but the topic … makes me realize it needs to be an essay instead,” Mish said.

Partly inspired by the formal necessities of the essay, Mish experimented with metrical patterns such as the fractured sestina, the ghazal, the blank verse ode and the Sapphic elegy in What I Learned at the War.

While a glimmer of inspiration might generate either a poem or an essay, for Mish, the impulse to write always manifests itself in a peculiar, definitive way.

“It actually starts as a shape in my chest,” Mish said of the experience of poetic inspiration.

Mish’s description finds an imperfect but approximate analogy in synesthesia, a condition in which people associate certain colors to sounds, among other things.

“Sometimes the shape has something to do with how it ends up looking on the page, but not always,” she said. “I feel the emotion of the poem as a shape before anything else.” 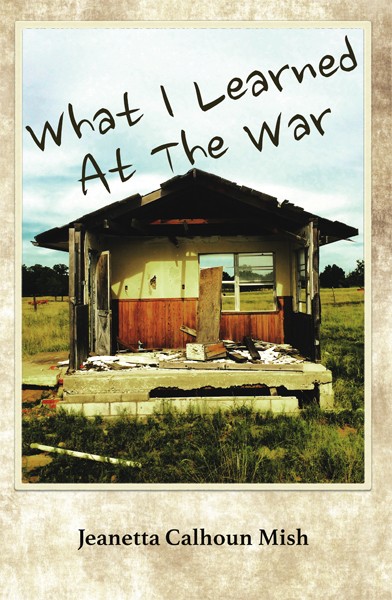 After Mish feels the shape that a poem might take, she said she often tries to fit the feeling to a narrative. Many of these narratives draw on both Oklahoma’s rich literary tradition and its strong sense of place.

For example, Mish said she sat down to write a poem about what Oklahoma’s land has lost over its history, infusing aspects of surveyor Henry Leavitt Ellsworth’s journeys with Washington Irving throughout the prairies. Mish turned the historical narrative into one about her own childhood, weaving past, present and place together.

When she lived out of state, Mish grew homesick for Oklahoma and said the state influenced her writing more than it had when she was a resident.

For Mish, Oklahoma’s land — a combination of different ecosystems — and people have an inherently beautiful complexity not always apparent to outsiders.

“We have this history that’s like no other history of any other state in the Union,” Mish said.

From Oklahoma’s origins as a “refugee camp” for various minorities to its cultural renaissance from 1910 to 1940 and all the way to the present, Mish sees a positive vision for the state’s poets and writers.

Inspired by Oklahoma (and literary) giants Joy Harjo and Linda Hogan as well as Ralph Ellison and her poet laureate predecessor, Benjamin Myers, Mish said she stays abreast of the ways that current poets “speak Oklahoma into being on the page.”

The poet laureate’s vision for the future?

“It’s just getting better, all the time,” she said.