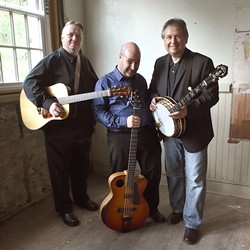 An esteemed member of the American Banjo Museum’s board of directors will help usher in a new hall of fame class during the downtown Oklahoma City museum’s biggest annual weekend.

This is the festival’s second year. Reservations for the event can be made online. Concert tickets can be purchased separately.

Jens Kruger is a Swiss-born banjo player who now resides in North Carolina. The lifelong lover of the instrument called the banjo museum one of his favorite places in the United States in a recent phone interview with Oklahoma Gazette.

“The museum is spectacular,” Kruger said. “It’s an amazing collection, but besides that, it’s a stunning display. The whole building — the entire facility — is first-class.”

The American Banjo Museum has been open in OKC for nearly a decade. It began in 1998 as a museum in Guthrie before moving to its current location on Sheridan Avenue.

Kruger said the trio has been visiting and working with the museum since its Guthrie days.

Before Kruger moved to the United States and furthered his banjo career, he taught banjo to students in Europe, where quality models of the American instrument are a lot harder to come by. He used to refer all of his students to a local music store that sold instruments made by California-based Deering Banjo Company.

“They made the best banjo for an affordable price,” he said.

At that point, Kruger never imagined that he would one day become Deering’s director of research and development, a title he has held for the last 12 years. Kruger works researching the best types of wood and metal to use for certain instruments to create an optimal sound for each particular banjo variety.

He said he met the company’s founders — Greg and Janet Deering — at a banjo festival in 1997. He later developed a couple of signature banjo models for the company. Impressed with what they saw, the Deerings hired Kruger to assist in the development of all their instruments.

Unlike some other instruments, there is no ideal banjo. Kruger said each style of the instrument — four-string, five-string, bluegrass, country, classical and more — has its own optimal look and feel.

“With pianos, you can narrow down to a certain model for a good piano,” he said. “You have manufacturers who are pretty much building the same instrument. With the banjo, it really depends on the style that you play.”

Kruger said what he tries to achieve with Deering is an instrument that is very playable and will not lose its shape over time. It needs to be something durable and stable with minimal tonal mistakes. Even small mistakes in sound can become quite noticeable when a banjo is electronically amplified.

Each type of banjo presents its own unique challenges, which keeps work fresh and exciting for Kruger.

“The challenge is to make all these instruments sound good for what they are and how they’re played,” he said.

Kruger’s first banjo was a four-string tenor. He said it was fine for a child, but he wondered why he was never able to replicate the banjo sound on the bluegrass records he constantly heard. Unknown to him at the time, bluegrass banjos have five strings.

Bluegrass and other banjo music always felt to Kruger like it was transporting him to a place far from his Swiss home.

“When I heard the banjo sound — just the tone — it didn’t matter if it was an old-time or bluegrass banjo sound,” he said. “It seemed like there was a world connected to the banjo that interested me as a child.”

“It was the idea of a land far away, where you were more free and could do as you please,” he said.

Kruger’s childhood quest to get his banjo to sound like his favorite bluegrass music led him to his own research of the instrument and its history. The more he learned, the more he became fascinated with it. Many hobbyists, he said, can relate.

“People who play golf, all of a sudden, they’re interested in its history,” he said. “They’ll say, ‘Oh, golf! It originated in Scotland! I would like to go to Scotland once and experience one of these golf courses.’ All of a sudden, there is a certain interest, so, for me, it came gradually as a child.”

The banjo is perhaps the most inextricably American instrument, and Kruger said its history often mirrors U.S. history. As important innovations in technology arise, the instrument changes along with them.

“Once you see that, you get fascinated with it,” he said. “That’s also why there’s quite a few collectors of these things around. There’s so much variety.”

Print headline: American picker, A fascination with the banjo led Jens Kruger from Switzerland to the United States.