Is there a better place on earth to be the home base of a business called Jerky.com than Oklahoma City?

Owner Douglas Iske doesn’t think so, even though he’s a native of Omaha, Nebraska, and an Internet business can be run from anywhere with a computer.

“My former business partner lived here, and at the time, it made sense for me to be closer,” he said. “Then, I found out I really like Oklahoma City. I come from a farm family, so it reminds me of home. There’s just a great sense of community here.”

So when it was time to take the next step with the business, he opted to stay. In fact, he’s importing family to help run the business.

Chad Trost is Iske’s cousin from Omaha who came to Oklahoma to spend his days like so many teenagers wish they could — hanging out at Penn Square Mall.

Jerky.com was never supposed to be a brick-and-mortar store.

Iske’s background is Internet marketing, meaning he builds businesses by providing products to underserved niche markets online. People wanted beef jerky, so he built a website to sell it to them. That has been going for eight years.

“Find a need and fill it,” he said. “It’s the same for furniture or clothing. Jerky.com started off like anything else, but then it turned into a labor of love. Now we’re building a brand.”

He was talked into taking the virtual shop’s wares into the real world of local markets, giving out free samples and getting Oklahomans hooked on his products. 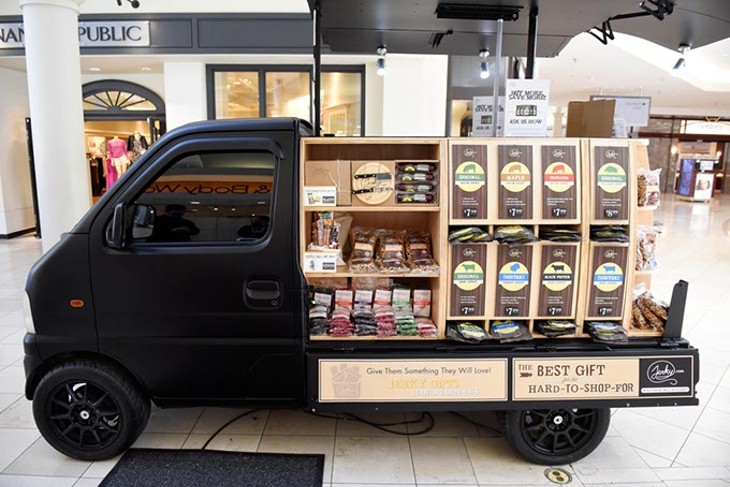 The Jerky.com truck still goes out a lot, but the headquarters in Midtown, 918 N. Hudson Ave., is about to celebrate one year in business. As easy as it would be to stay behind the keyboard, Iske said he has found joy in seeing people respond to his products.

Iske claims that he literally eats, sleeps and breathes jerky, which is probably, at most, two-thirds true.

What is true is that the Jerky.com team is constantly dreaming up new flavors. Not all will make it to market, but Iske said team members are always listening to customers, trying to figure out what other needs they can fill.

Though plenty of folks are excited to just buy peppered beef jerky or buffalo jerky, customers were asking if there was something else they could get to accompany the jerky in a gift basket. That’s where the exotic animal summer sausage came from.

And when people said they wanted to sate their sweet tooth, Iske wanted to add something that was similar to jerky in an old-fashioned way, but with a twist. That led to selling different flavors of licorice.

“We started with 12 flavors, and we’re adding two new ones next month,” he said.

The site still focuses mainly on seasoned, dried meats, but it also offers what Iske called “man gifts” before quickly correcting himself.

One of the most unique products is the deep-fried peanuts, which are eaten shell and all. Iske said it’s a mix of comforting and new. That’s the sweet spot.

The jerky selection started with 12 flavors as well. Now Jerky.com has over 100 in varying types of seasoning, meat and process. One interesting version is a South African-style jerky called biltong. Rather than cutting and then drying the beef, biltong is made by drying and then cutting, giving it a subtler flavor reminiscent of steak. 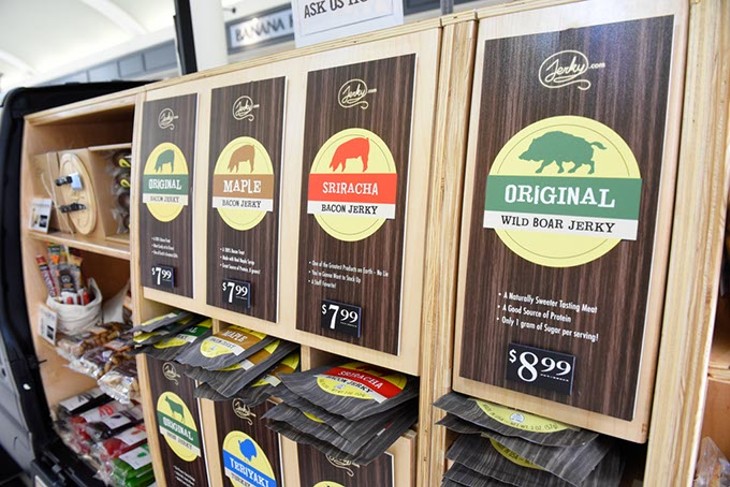 Like so many other things in the business, the growth comes down to demand.

“People came back from Florida and asked if I’d ever had alligator jerky. You hear it enough times and you know there’s a demand for it. I’m kind of thick-headed,” he said. “The same happened with kangaroo jerky.”

Those are seasonal products because the supply chain is tricky. Getting the right quality of meat reliably is difficult, which is one reason those varieties sell out so quickly.

Jerky.com’s brand has become so defined to Iske that the company has spun off brands for different types of jerky, like the “soft and tender” Bricktown jerky or the rough, tough Cowboy-style jerky of the Oklahoma Jerky Company.

That’s quite a change for a business that was supposed to be a turnkey operation for Iske. Though he didn’t plan on making dried meat his life’s passion, he found a market and a home in Oklahoma City.

Soon, the company will make another expansion into one of the city’s newest centers for commerce and entertainment: Chisholm Creek. Another Jerky.com store will sit alongside Top Golf, iFly, Cabela’s and Republic Gastropub’s second location.

“When people find out about all the things Chisholm Creek is going to have ... it’s a big deal,” Iske said. “We’re excited to be a part of it.”

Print headline: Chew-chew train, Douglas Iske’s Jerky.com started out online, but it has quickly found a home in Oklahoma City.