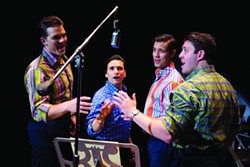 Jersey Boys depicts the true story of New Jersey pop-rock group The Four Seasons. It first hit the Broadway stage in 2005, winning four Tony Awards and a Grammy, and has toured globally since then.

The Four Seasons earned international acclaim through the 1960s and into the 1970s and still performs in concert. Its original lineup included lead singer Frankie Valli, keyboardist Bob Gaudio, lead guitarist and baritone vocalist Tommy DeVito and bass guitarist and vocalist Nick Massi. The act wrote most of its own songs and sold 175 million records internationally before band members were 30 years old.

Hines earned his Master of Music degree at Oklahoma City University. The former Lyric Theatre of Oklahoma actor performed in local productions of Annie Get Your Gun, The Rocky Horror Show and Oklahoma!, among others.

The Jersey Boys cast was selected from auditions that spanned 11 cities across the United States and Europe. It took seven weeks to cast the production and five weeks to rehearse for the international tour.

“There are a lot of elements that go into preparing for this show specifically,” Hines said. “We showed up on the first day and we started learning music; doing a great service to the music is a huge responsibility.”

He said his biggest challenge, though, is playing such an ambiguous character. Little is known about the history of these boys from Jersey, except they endured tough lives and fought to overcome many vices while under public scrutiny. Massi was no exception.

“Nick Massi is the one there’s the least to know about,” Hines said. “I really have the freedom to bring my own creativity to the part.” 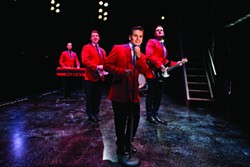 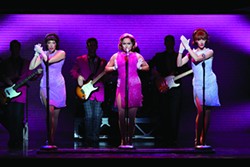 What sets Jersey Boys apart from other hit musicals is its sass, flash and foul language. The Four Seasons became famous for its upbeat tunes, and cursing came with the members’ East Coast upbringings, but Hines said it doesn’t detract from the high-energy response of audiences.

“No one has told me they don’t like the show. It speaks to people, and the music gets into your ear,” he said. “It’s the only show I’ve been part of where people come out of their seats literally dancing in the aisles. I’ve never seen that in any other show.”

The production documents the rags-to-riches rise of The Four Seasons as a music act. It is divided into four segments, and each band member offers a narrative of the group’s history. Many of its hit songs are featured in the musical, including No. 1 singles “Big Girls Don’t Cry,” “Sherry,” “Walk Like A Man,” “December 1963 (Oh, What A Night)” and “Rag Doll.”

“It’s a showcase of all these songs that are incredibly iconic and timeless and everybody knows,” Hines said.

“The music is really what gets people through the door and up on their feet.”

The group first started out as The Four Lovers in 1956. Its music didn’t sell well, and the act was dropped from two record labels as its lineup fluctuated.

In 1960, Valli, Massi, Gaudio and DeVito reformed under a new name: The Four Seasons.

“They figured out collectively how to become stars,” Hines said. “They had to overcome a rough upbringing, a rough childhood, a lot of temptation, a lot of crime. They were all involved in that. It was highly miraculous that they were able to get up and out of there, because the odds were certainly not stacked in their favor.”

It was a long and arduous journey for the group. As it performed as The Four Seasons, the act faced one obstacle after another and failed to sell singles. Its first hit came in 1962 with “Sherry,” followed by “Big Girls Don’t Cry” and “Walk Like a Man.” Almost two dozen top-50 singles followed through 1975. From 1962 to 1964, the only other act to match its record sales was The Beach Boys.

“It’s four guys that really didn’t have very many options in New Jersey and, through hard work and determination, figured out a way to get up and out of their little town,” Hines said. “It just so happens that in the process, they became one of the greatest pop sensations of all time.”

Print Headline: Four score, Jersey Boys gets audiences out of their seats and ‘dancing in the aisles.’