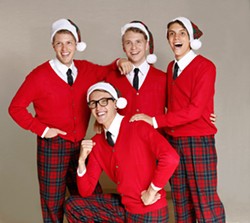 Pretending toilet plungers are microphones, they rehearse in the basement of a plumbing supply store until they have every harmony pitch-perfect, but before they can play their first big gig, the fictional vocal quartet Forever Plaid all die in a collision with a school bus. So begins Stuart Ross’ popular stage musical Forever Plaid, which finds the group reunited and resurrected to perform a revue of 1950s “guy-group” classics. In the play’s sequel, Plaid Tidings, the Plaids are back again, this time to put on a Christmas show.

Director Scott Hynes said the show’s music and sensibility are nostalgic for many, but for the characters of the four Plaids, the 1950s never ended.

Pointedly, the bus that crashes into the Plaids’ 1954 Mercury and kills them is carrying a group of schoolgirls going to watch The Beatles make their iconic American debut on The Ed Sullivan Show. One of the challenges Hynes faces is helping his four-person cast, all in their 20s, capture the mindset of an era that ended decades before they were born. He has been sending actors Owen Witham (Frankie), Jeremy Small (Jinx), Mitchell Hammond (Sparky) and Gareth Forsberg (Smudge) links to YouTube videos of singers performing on Sullivan’s show.

“I’m just trying to get them familiar with anything and everything I can from the era,” Hynes said. “Part of rehearsal will be devoted to watching old Dean Martin and Milton Berle Christmas specials.”

Hynes himself is in his late 30s and has relied on older relatives’ recollections of what those once-a-year television broadcasts meant to families in the 1950s and ’60s.

“I remember my mother and grandparents talking about how much of an event it was every Christmas to get to sit down and watch one of these Christmas specials,” he said.

Plaid Tidings, presented on the Jewel Box stage with the assistance of musical director Tim Goff and choreographer Jennifer Conaughty, is an attempt to recapture this feeling for modern audiences with “really clever mashups of classic Christmas music and sacred Christmas music with nostalgic pop tunes,” Hynes said.

Hynes said he has worked on more than two dozen productions as a performer and technical director, but Plaid Tidings will be his second time to “control the helm of a full-fledged production from a script.”

“I’ve been in enough musicals, you’d think by now I’d have a grasp on how they work, period, but there’s a learning curve to everything. I’m still figuring stuff out,” he said.

Though the impetus in the Plaids’ origin story is a day-the-music-died-style car crash, Hynes said that Plaid Tidings is “fun and open” and family-friendly.

“There’s not a whole lot of dramatic tension or high stakes,” he said.