Jewel Theatre straddles past, present and future at the beginning of its restoration campaign

If movies transport their viewers to different times and places, then so can their theaters, which sometimes have stories even more compelling than those on screen.

Jewel Theatre, 904 E. Fourth St., stands alone as the only African-American theater in Oklahoma City that has survived over the decades and the only theater currently in the process of fundraising for restoration.

The Jewel Foundation is an organization overseeing the building rehabilitation efforts.

Its five-member board is presided by Sherri Williams, and Arthur Hurst, current owner of the Jewel Theatre, serves as vice president.

Officially added to the National Register of Historic Places in 2009, nearly 80 years after its construction in 1931, Jewel Theatre was once a communal refuge necessitated by the legal and societal prejudices of segregation.

“To me, the historical significance of the theater is that we have come a long way from that, but this building still stands as a representation of where we were,” said Karen Wallace Douglas, secretary and treasurer of the Jewel Foundation’s board.

Because of the restrictions that segregation placed on African-Americans, black residents could only live within a certain mile radius in which all necessary businesses had to operate, Douglas said.

The Oklahoma City theater is one of three Jewels once owned by Percy H. James, who was an African-American businessman of the Jay-Kola bottling enterprise.

“It’s just amazing to me that one black man built this theater for his community,” Douglas said.

The once-vibrant Jewel closed in the 1970s, and many of the surrounding buildings have been demolished.

“The Jewel still stands, and it’s only because of Mr. Hurst,” said John McConnel, a historian on Jewel Foundation’s board. 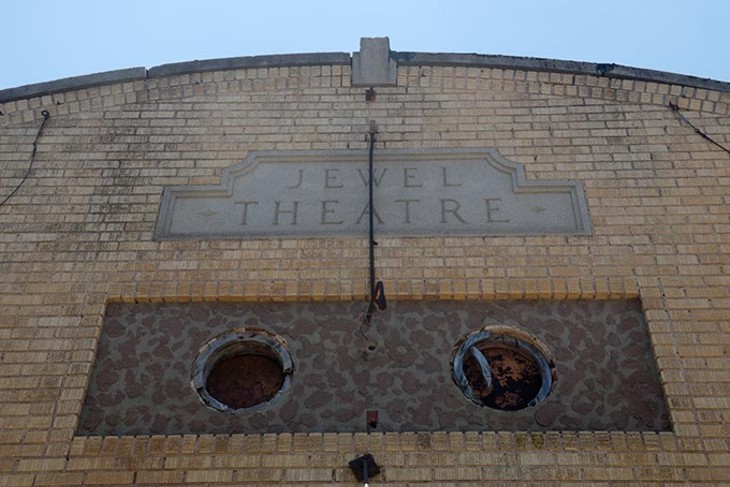 Hurst has a long history with the building; he was once a theatergoer and is now its owner.

“Growing up, I lived just two blocks from the theater, so it was the theater I went to the most,” Hurst said.

Due to his frequent visits, Hurst got to know the owner and eventually purchased the Jewel.

“I just wanted to see the theater opened again,” he said.

Hurst began working with the board members of Jewel Foundation in order to help achieve his goal of building rehabilitation.

Jewel Theatre has held up over the decades and is structurally sound. The building has concrete flooring throughout, a sloped auditorium, a usable proscenium, space under its stage for dressing rooms and a façade still in good condition, said McConnel.

The theater’s vertical neon sign, likely from the 1940s, has been preserved and should be functional after some refinishing. Oklahoma History Center also displayed a 35 mm projector from the Jewel.

Even though the building is not currently in use, it continues to draw the curious.

“Throughout the years, that building has been photographed by so many people,” Douglas said. “There are a lot of people that are aware of the building, know the history.”

Because of the Jewel’s status as a historically significant building on the National Register, the rehabilitation process will have specific guidelines to preserve elements of the structure’s past.

“I think that people can look forward to seeing a state-of-the-art theater,” said Catherine Montgomery, architect and owner of Preservation and Design Studio. “It will have some aspects that will evoke the feelings and appearance of the old theater, but there may be some modern touches incorporated.”

One way the foundation aims to recapture and modernize the theater’s  function is by expanding its role to that of theater and community center.

Some of Jewel Foundation’s future goals for the rehabilitated space include offering stage shows, acting classes, concerts, film screenings, lectures, political rallies and other personal events such as bar mitzvahs and weddings.

“We’re really looking for it to be a theater that is for the entire Oklahoma City community,” Douglas said.

Jewel Foundation also hopes to offer after-school programs geared toward the arts and engaging with Oklahoma school curricula on the topics of Oklahoma history and black history.

“We need to preserve it,” said Williams of the Jewel and the robust community that once frequented and surrounded the theater. “People need to know about it, what was there.”

Jewel Foundation has a projected fundraising goal of $2 million for the necessary renovations. The foundation launched a GoFundMe page for online donors, some of whom might be eligible for tax credits through the Historic Tax Credit program.

“It was great to be on the sidewalk watching Mr. Hurst’s grandchildren handing out postcards,” Montgomery said of the event.

Once the foundation reaches its fundraising goal — likely sometime in 2018-2019 — the rehabilitation process is expected to take about a year.

“The Jewel is still sitting there with its sloped floor and its proscenium stage, ready to be put back into service,” McConnel said.

Print headline: Future past, An icon of African-American cultural achievement, the Jewel Theatre straddles past, present and future at the beginning of its restoration campaign.