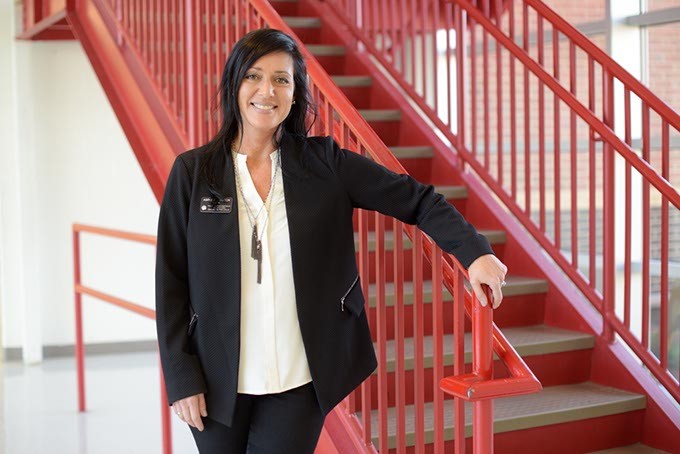 Aspasia Carlson remembers her first impressions of John Marshall Mid-High when she entered the northwest Oklahoma City school more than seven years ago.

“There was a palpable feeling of tension,” said Carlson, who has served as the school’s principal since June 2011. “People were just not happy. You didn’t hear teachers and staff supporting one another or enjoying one another. It wasn’t a happy place for anybody — students, teachers, support staff or administrators. There was a culture of disrespect. I knew that was the first thing I had to tackle.”

Carlson, who began her education career as an English teacher in Dallas Independent School District, recognized changes weren’t going to be easy, even if they were for the better. Determined to turn around a low-performing school, but also help students get a better education and lead fulfilling lives, Carlson’s very first action was simply modeling respectful behavior.

Qualities like respect and responsibility began to spread among the more than 700 students.

Next, Carlson sought out what people did or didn’t like about the school, what needed work and the school’s strengths. She paid close attention to responses from staff, students, parents and community members alike.

“I tried to do more listening than talking,” Carlson said.

With more than three-quarters of students living in impoverished households, John Marshall, part of Oklahoma City Public Schools, qualifies for federal Title 1 funds to help boost achievement. Carlson didn’t need to look at established federal programs to get a sense of the poverty in the urban school. Its effects were obvious and directly linked to students’ educational success.

Then there were the inequalities of educational offerings. Carlson knew she had to work to ensure that John Marshall students received the same high-quality education as students in nearby affluent communities. To challenge the inequality, Carlson began to tell John Marshall’s story in grant applications, meetings with potential corporate partners and during community conversations. Her efforts ushered in a new era of opportunities and learning.

A $439,000 grant from the National Math and Science Initiative made way for growing the school’s AP program from one course to 13. Students benefited from the college-level courses and earning college credit hours at no cost. A unique partnership with the University of Central Oklahoma made way for the Academy of Finance. It puts students on a career pathway while also receiving hands-on experience by offering tax preparation services to the community.

“My thought was the worst that could happen is they say no,” Carlson said of her tactic to bring the community into the school.

Carlson believes that when schools and local organizations work together to support learning, everyone benefits. Community involvement, coupled with strong classroom experiences from dedicated educators, has proven to be a major factor in students’ improved achievement and behavior.

“Our goal is to close that equity gap for our kids, increase achievement and meet the needs of every student,” she explained. “We want to really prepare them for college, the military or wherever they might choose to go.”

With John Marshall’s focus on learning, its collaborative culture with the community and rising state test scores, it has lured interest from state education and district leaders. More recently, the Oklahoma Association of Secondary School Principals named Carlson its Oklahoma Principal of the Year, which entitles her to national recognition.

In September, Carlson, along with the top principals from each state, District of Columbia and U.S. territories, will be honored at the Principal’s Institute in the nation’s capital.

There, National Association of Secondary School Principals will name a Principal of the Year.

Carlson approaches the new role as a voice for principals, teachers, students, parents and community members. Like many in Oklahoma education, she is frustrated with state leaders’ decisions on education funding.

Fewer state dollars forced Carlson to cut her staff by 20 percent, which included eliminating the ninth and 10th grades’ assistant principal position a year ago. She knows cuts are coming again and those cuts impact student extracurricular activities, a driver of student engagement in her school.

Carlson made her concerns known to several state lawmakers. She plans to continue her advocacy as the state’s top principal.

“We have to find a way to turn this around in Oklahoma,” Carlson said. “We are really condemning ourselves to a very poor future — poor intellectually, poor economically and poor socially.”

Everything Carlson does is with her students’ best interests in mind. When Carlson reflected on student successes and even tragedies, pride and adoration filled her demeanor and voice. John Marshall is a school where youths want to participate and are empowered to pursue their futures, Carlson said.

“Are things perfect?” She asked. “No, they are not. We can improve and we are always looking for ways to improve. However, John Marshall, today is very different from where it was seven years ago.”