John Moreland writes sad songs. That observation seems to be the consensus of writers and reviewers when describing the Tulsa-based singer-songwriter. Even The Wall Street Journal followed the conventional wisdom in its June 30 profile of the artist, titling the piece The Sad, Sweet Songs of Oklahoma’s John Moreland.

Moreland is actually a Texas native, but he has lived more than half his life in Oklahoma, graduating from Tulsa Union High School in 2004. His father’s engineering job took them to Kentucky from Texas before the family settled in the Tulsa area. His parents now live in Bixby.

As for the sad songs, Moreland has a pretty standard answer he now gives during interviews, including this one.

“I’m not super depressed,” he said. “That’s just the emotion that triggers the writing. I don’t typically have a good day and think, ‘I should write about that!’”

Yet, in spite of the sadness in which Moreland’s songs are steeped, there is a melodic and lyric subtext that indicates that there is something hopeful happening, if not in the song itself, at least in the artist. The effect works much the way blues works, which is to say the point of melancholy or lament is not the lament itself; it’s the catharsis that follows.

Moreland admits that he writes songs mainly for himself, and as a confessed introvert, the process of playing those deeply personal songs on a stage is not just counterintuitive but often nearly unnerving.

“I get the irony of being an introvert who performs,” Moreland said. “I’m getting more comfortable with it, but there are still shows where I’ll feel fine while I’m playing, but I’ll feel awkward between songs.”

The stock in trade of a singer-songwriter is usually that narrative moment between songs when the most comfortable of the breed become raconteurs, entertaining the audience with a song’s backstory or telling a story about his or her own life that seems to offer a flash of insight. These moments are deeply satisfying to the uber-fan, furthering the false sense of intimacy that fandom or celebrity worship can foster.

On those nights when Moreland is feeling awkward, his solution is simple when this moment arrives.

“I just don’t stop between the songs on those nights,” he said. “The playing in front of people — something just compels me to do it.”

That compulsion has Moreland currently playing shows across the U.S. He played at Tulsa’s famed Cain’s Ballroom with Jason Isbell early and a gig at Woody Guthrie Folk Festival early this month. He also has a show at ACM@UCO’s Performance Lab, 329 E. Sheridan Ave., on Aug. 5. After that, he heads to Europe in January, taking a short break from playing live in November and December.

Moreland has been playing in front of people since he was a teenager. In the early years, it was punk and hardcore, a dicey choice in his parents’ conservative Southern Baptist home.

“I discovered bands like Rancid and Green Day, and I delved deeper,” Moreland said.

In the late ’90s, evangelical and fundamentalist Christians would have described that sort of delving as darker, not necessarily deeper. It was the heyday of crossover acts, bands and artists who were trying to make a mark in so-called secular music while remaining stars in contemporary Christian music (CCM). Youth pastors commonly had handouts or posters for parents and teens that offered “Christian alternatives” to the bands the kids liked. Kids who liked punk only had a couple choices in CCM, including the most popular band, MXPX. It was this Washington-based band that Moreland listened to at home to avoid “freak[ing his] parents out too much.”

His tastes changed as he aged, although he was a songwriter even in his punk/hardcore days. The band was always a group of friends, and when he realized that the comings and goings of band members left him playing with people who were no longer friends, he struck out on his own.

His first hint of national recognition came when three of his songs were featured on Sons of Anarchy, the FX network television program about a motorcycle club. Since then, he has been featured in The New York Times and Rolling Stone, in addition to the WSJ piece.

“I didn’t watch the show, so I didn’t have that moment of hearing my voice on television like other artists do,” he said. “My sister downloaded the episode the first time one of my songs was featured, so I did see it eventually.”

What the show did do for him was create some name recognition outside of Oklahoma.

“I’m grateful for the exposure, especially when I play shows and people know me because of Sons of Anarchy,” he said.

Additionally, it helped his relationship with his parents, at least in terms of how they viewed his music.

“The kind of press I’ve been getting the last few months, as well as the television notice, has made my parents excited,” he said. “I think for a long time, they were worried I was screwing around.”

Ironically, it was his father’s record collection that first exposed young Moreland to some of the biggest names in folk, Americana and roots singer-songwriters. Steve Earle’s Rich Man’s War, a 2004 meditation on the futility of war and the exploitation of the young and poor in light of Iraq, Afghanistan and Gaza, struck a chord with him.

Even now, you can hear a hint of Earle’s post-Woody Guthrie anti-war songwriting in Moreland’s work. On the new album, High on Tulsa Heat — which came out in April— after warning that life will bring wolves to the door, Moreland cautions us that those wolves will “Make you leave all that you love to fight a war/And never tell you what you’re dying for.” 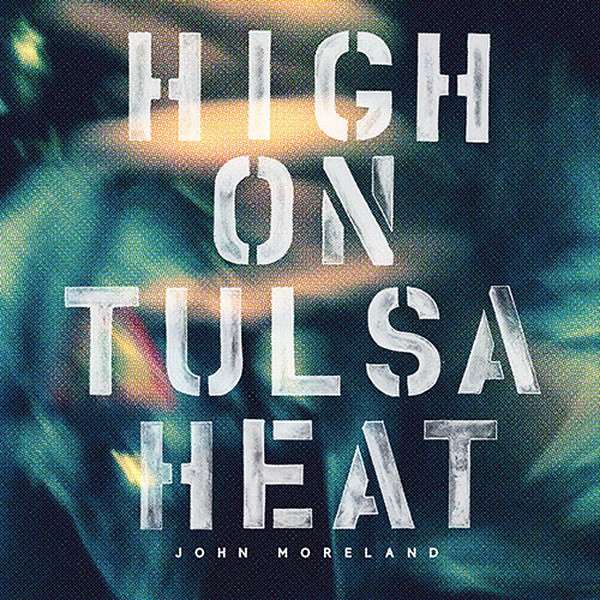 The track is the opening cut “Hang Me in the Tulsa County Stars,” and it features everything that Moreland is rightly known for: a raspy voice that is most often compared to Bruce Springsteen, thoughtful lyrics, simple compositions and hypnotic phrasing.

In “Sad Baptist Rain,” a song about growing up Baptist and all the guilt that adheres to teens when they defy the taboos of conservative evangelicaldom, Moreland reflects on the enjoyment that somehow makes all the guilt even more confusing.

“The devil ain’t nearly as real as he seems/Your name is a number I see in my dreams/Your heart is a dangerous, beautiful thing…” This, by the way, does not sound like one of those sad songs that he is often accused of writing. This sounds like the affirmation of adolescent love in spite of the devil and in spite of religion that fails to understand adolescent love.

Justin Fortney, a singer, songwriter and musician in Guthrie and frontman for Stranded at the Station, has been a Moreland fan since he first saw him perform live before the release of his critically acclaimed album In the Throes in 2013.

“It was one of those concert moments where if someone tries to talk to you, there’s a solid chance you’ll punch them because you don’t want to miss a note,” Fortney said. “It sounds like hyperbole, but there just aren’t a lot of folks writing songs this good.”

That is the kind of praise Moreland hears all the time, and not just from songwriters. The story of Rachel Maddow praising him effusively is now common knowledge — she said he should be a household name. But when songwriters who produce amazing lyrics are using all superlatives to describe another artist, what must this artist possess to engender such respect and admiration?

“He’s in that rare space as an artist,” Fortney said. “He can craft a special song, and he delivers it honestly with a voice that complements the poetry. God, he can break your heart with those songs, but he does it so well that you feel a bizarre energy from it. Maybe that’s one of the marks of a special songwriter.”

When it comes to musical inspiration, Moreland rattles off a cast of characters we expect: Steve Earle, Bruce Springsteen, Jackson Browne and Guy Clark. It just so happens that all these artists were also excellent songwriters. Springsteen is too often remembered for the pop years — even though “Born in the U.S.A.” was a protest song, not an anthem — and not given appropriate credit for pieces like “Thunder Road.” The name that leads the list for songwriting, though, is Lucinda Williams.

“She has a lyrical simplicity that I think about and shoot for,” Moreland said. “I want some of that to rub off on me. There is a line in ‘Metal Firecracker’ where she sings ‘All I ask/don’t tell anyone the secrets I told you.’ I think about it, and I just … wow! I’m trying to get into that simplicity.”

Songwriting this good is always at least personal. The perspective comes from experience combined with a poetic sensibility. In spite of his lack of formal education in writing — although, he admits to leaning toward English in high school — Moreland writes with a command of language, metaphor and emotion. Some of that is due to his background, and some is just what happens when you are alive and pay attention to what the world looks like.

“I think music has been a good place to work through some of these things,” he said. “Someone asked me after a show one time why I write anti-religious songs. I don’t have an anti-religious agenda, though. I tried to explain that I was just a young, impressionable kid when I was in those churches and now I’m trying to understand it as an adult.”

That process of contextualizing the religious experiences of childhood is often helped with creativity, whether or not we remain in the faith of our childhood. Moreland has not. He is reluctant to discuss spiritual things, and the songs do sort of speak for themselves if you are paying attention.

“I’m still spiritual,” he said, but the word was one we agreed on, not one that came readily to his mind. “It’s weird to talk to people about it, though. I end up sounding like a hippie or something, but I do think there is more going on than we can see. I drift back and forth on this issue, but I don’t feel a need to pin it down. I’m open to whatever.”

Even on his most hopeful song to date, the title track to the new project, Moreland cannot leave the spiritual language out of the writing. “We got wrecked on love in the heavens above, now we’re back on broken ground,” he wrote. He put the title track last on the album on purpose. He wanted it to finish off an album that he admits has one of the most “bummer tracks I’ve ever written.”

“It feels redemptive and triumphant,” he said.

And the track does, in the weirdest way. The experience of love can lead to loss and pain, even as it is capable of giving us the greatest joys and making us better humans. The risk humanizes us, and the pain is acknowledgment that we lost something deep and precious. Moreland hits the notes beautifully, painfully, and the longing in his voice is not just about his pain; it’s a shared experience, even if he wrote it for himself.

Print headline: Oklahoma son, It is no surprise that John Moreland earns national attention. His music breaks your heart and lifts you up all at once; he’s truly a product of this red-soiled state.