Jon-Michael Frank has an uncanny knack for expressing the worst in the best possible way.

His poetry comics, which feature a crudely rendered figure or object with a caustic caption in ink and watercolor or gouache, are on display in a gallery show at DNA Galleries.

With poetic concision and a devastating sense of humor, Frank’s illustrations call attention to the absurdity and futility of daily life. One featuring a hastily drawn banana says, “The organic thing to do is die.”

Although the topics of many of his comics are dark — death, meaninglessness, injury, embarrassment — Frank’s brutal honesty and the earnestness of his hand-drawn figures let the humor of these absurd human predicaments shine through.

“I think most people can really relate to his work,” said Jackie Teague Wentz of DNA Galleries. “We all have those days where we’re just like, ‘This is the worst.’ It’s funny and terrible and true all at the same time.” 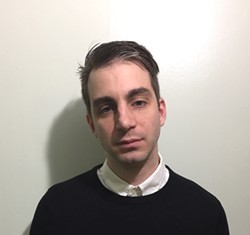 The collection of Jon-Michael Frank’s poetry comics is on display at DNA Galleries through Oct. 8. Nestled in the Plaza District at 1709 NW 16th St., DNA Galleries sells locally made crafts, apparel and art.

In addition to making comics, Frank is a poet and has published several illustrated books as well as a poetry chapbook; he currently works as an assistant editor at Birds, an independent poetry press. He calls Austin, Texas, and Philadelphia, Pennsylvania, home, living between both cities.

Although DNA’s roster is mainly composed of artists from central Oklahoma, Jon-Michael Frank is one of the only artists from outside Oklahoma to sell work and have a gallery show at DNA.

Having exhibited at DNA for the past couple of years after becoming familiar with the gallery through a similar boutique in Austin, Frank is helping stretch DNA’s definition of local to encompass some of Texas too.

It is often difficult for artists to find a gallery willing to show and sell their work.

“It’s sort of finding the right fit, and DNA’s been great, one of my great stores,” Frank said.

For DNA and its customers in Oklahoma City, the feeling is mutual. Erin Merryweather, who works at DNA and has worked with Frank for the duration of his time there, said that although Frank didn’t originally enjoy the luxury of having a local following, he is one of the gallery’s top sellers. 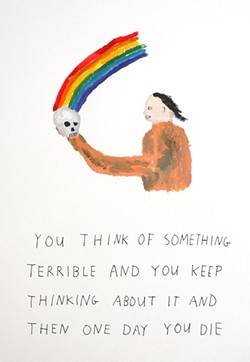 To complement his presence in stores across the country such as DNA and Parts & Labour in Austin, Frank has been able to build a dedicated fan base online and has almost 9000 followers on Instagram.

Frank believes that the art community has wholeheartedly embraced the Internet and social media as a place to share art and connect artists and admirers while avoiding some of the exclusionary social dynamics of the art world.

“People inherently like art, and I think for a long time, if they didn’t have access to it, there’s that sort of deprivation,” Frank said. “But I think now with the internet, you can kind of get that fix, and I think it’s great for that.”

Frank’s wry, spare comics are especially well suited for posting and sharing on social media. His short, witty captions are reminiscent of tweets, and the comics’ dry, almost confessional humor is right at home next to memes and absurd internet humor.

One of his illustrations depicting a grim figure standing alongside an overturned trashcan captioned, “The trash truck came but they would not take me,” received over 1,000 likes on Instagram.

Although Frank has accumulated a strong and dedicated following online, his popularity transcends the digital world of likes and reblogs.

Merryweather explained that several customers were compelled to come in after finding Jon-Michael Frank’s comics online. 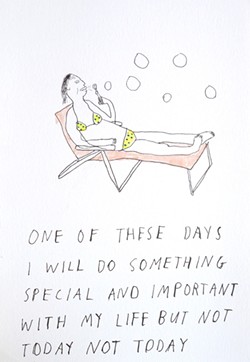 Frank regularly has prints, pins and other pieces for sale at DNA, but having a gallery show is a chance to display new and larger works.

As a prolific illustrator — he’ll generate and draw over 50 ideas in one sitting — he is happy to be able to evolve his approach.

Having drawn thousands of poetry comics with a similar style, he is using the gallery show at DNA as an opportunity to “give diversity” and try something new.

Some of the pieces in the show stick to Frank’s typical style — a figurative illustration accompanied by a witty caption — but several of his new works are 11-by-14 inches, which is larger than his usual works. Others are a significant departure from his typical approach and feature more abstract illustrations.

Frank said he’s “super grateful to DNA” and the people he has worked with for providing a platform for this show and his work over the years and as a non-local artist exhibiting at DNA, he plans to visit soon.