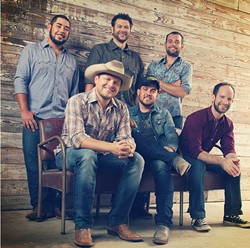 Like kids at Christmas, fans often circle album release dates on their calendars weeks and months ahead in anticipation.

However, the feeling is sometimes different for recording artists.

It’s a personal, tender and even dark look at the namesake frontman’s romance with, and eventual split from, his former wife.

Band guitarist Caleb Keeter said he usually tries to distance himself from an album’s initial reception.

After Front Row Seat’s release, however, he welcomed every bit of feedback.

“On this particular album, I was totally that guy,” Keeter said. “We went a little out there with this one. This time around, I was definitely anxious to see what was going to happen.”

Both said they are proud of the band’s most recent album and where it has taken them in the last year.

Front Row Seat might be the act’s most visionary release to date, but dozens of the project’s songs were recorded before bandmates had a clear idea of what the album would come to mean to them.

Hertless said they chose a tracklist from around 25 tunes recorded during sessions leading up to Front Row Seat. The final album is a 16-track offering that takes listeners from the young and innocent stages of Abbott’s romance to his eventual marriage, divorce and return to bachelorhood.

Though the album feels jointed, Hertless said band members did not enter the studio with the intent of telling Abbott’s story.

It came together organically.

“You always record more, just so you can see what they sound like together,” Hertless said. “It just started turning into this puzzle where it was like, ‘OK, wait; this fits right here.’”

The band did, however, have a pre-existing concept that guided Small Town Family Dream, its preceding 2012 release.

That’s not how Josh Abbott Band usually operates, though.

Keeter said an album’s early creative stages start with recording as many good songs as possible. If a theme emerges, great.

“A lot of those songs weren’t even necessarily written by us,” Hertless said. “We did some outside cuts on that, so it’s cool how it all just came together.”

The latter half of Front Row Seat gets darker and moodier than fans are likely used to hearing.

That is perhaps most evident on “Amnesia,” which made its music video debut last month.

The song captures the hopelessness some people feel as they attempt to move on with their lives.

“Amnesia” was written in part by Abbott. Keeter said artists write differently depending on where they find themselves in life.

“If some of the dark stuff comes out, it’s going to be just as relatable as a happy song about college,” he said. “It just depends on where they’re at in their life.”

Hertless said the album is darker, in part, because the band uses more somber-sounding keys than it has before. He also complimented Keeter’s guitar work.

“It has that low, chunky kind of feel, and I think that adds to it and makes it more dark than some of our past stuff,” Hertless explained, “which is really heavy banjo, really heavy fiddle.”

Front Row Seat is one of countless country albums that examine love and its painful wake.

Many regard Willie Nelson’s 1974 release Phases and Stages as one of the best takes on divorce ever recorded.

Front Row Seat’s effectiveness is not blunted by its well-trodden theme.

The story, presented in five acts, feels freshly specific to Abbott while remaining universal and relatable.

“Everybody, in some form or fashion, has had a relationship,” Hertless said. “It’s really the best story for everyone to understand.”

The tracks are laid out so listeners can almost pick out where they are in their own relationship.

“You may not be in a breakup, but you may be really into someone, like ‘Crazy Things,’ and you relate to that because you love someone so much,” Keeter said. “Or maybe you’re out and you’re hooking up with somebody, like ‘While I’m Young.’”

Front Row Seat is about a romantic relationship, with the idea being that a spouse has a “front-row seat” to their significant other’s life.

It also is a concept that can be applied to the relationships between bandmates.

“We’ve got a front-row seat on a rollercoaster,” Hertless said of Josh Abbott Band members. “It’s like being strapped on to the front of a fast-moving car. Have you seen Mad Max?”

Around 12 people squeeze onto a tour bus, and with hours spent on the road between cities, Hertless said there is little room or time for secrets.