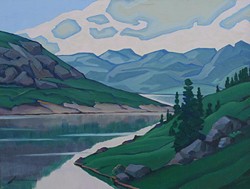 To start the new year, JRB Art at the Elms cleans its slate and introduces two new exhibitions. This month, the gallery honors Oscar Brousse Jacobson, a significant figure in Oklahoma art history, and celebrates the color white with its annual Tres Blanc group show.

Born in 1882 in Västervik, Sweden, Jacobson was the first director of the University of Oklahoma’s School of Art & Art History, founded in 1915. In 1936, he also helped establish the school’s first art museum, which eventually became Fred Jones Jr. Museum of Art. He retired in 1954 and died in 1966.

Jacobson brought international attention to Native American art while transforming his own style.

The prolific artist also created more than 600 paintings. Jacobson’s focus was southwestern U.S. landscapes. JRB’s exhibit allows viewers an opportunity to see an array of his work and how he matured over time.

“We have 12 paintings that have not been on the market for over 50 years,” said Joy Reed Belt, JRB Art at the Elms founder and director. “He is of enormous importance to the history of art in Oklahoma.”

The exhibit also features two Jacobson paintings on loan that are not for sale, bringing the show’s total to 14.

In the earliest Jacobson work on display, “Untitled ‘A,’” created in 1916, he depicts a jagged, rocky, faded peach-and-pink southwestern mountain against a blue sky. The Swedish painter used pointillism, a European painting technique utilizing multiple dabbings from a paintbrush to create a form. In later works, many of which are on display, he became bolder with strokes and color, adding depth to the boulders, streams and fields that inspired him.

One of his lasting legacies to the state’s art history is his recognition and promotion of Plains Indian art.

Jacobson encouraged Native Americans to earn college educations, particularly in the arts. Recognizing the talent of a group of student Kiowa tribe members, he dubbed the artists the Kiowa Five.

Jacobson exhibited their works across the U.S. and Czechoslovakia, bringing them international acclaim. The tribe named him an honorary chief.

Tres Blanc runs concurrently with the Jacobson exhibit through January. French for “very white,” the annual group show highlights the color’s beauty. JRB invited artists to use white as both inspiration and subject.

All mediums and subject matters are decided by the artist.

“It was a way to have a break from an old year to new year, kind of like cleaning your palate,” Belt said, describing the idea behind Tres Blanc, now in its third year.

The group show presents work from nine local artists whose interpretations and inspirations of the color differ wildly.

Oklahoma City artist Adam Lanman uses minuscule, cut-out pieces of notebook paper to give a map of a family farm a three-dimensional feel in his piece “Winter Farmyards.”

“I always think it’s very interesting to see how each different person interprets,” Wolfe said. “Other than it needs to be in a range of white, there were no guidelines.”

“I look at found feathers as gifts,” Hustis said. “The feathers dropped from these majestic birds inspire an intense feeling of gratefulness. ”

She also helped introduce the exhibit concept in her own way.

“At the art opening, I hand-cut white paper dove feathers for the public to pick up in and outside the gallery,” she said. “It was funny how people reacted to them on the ground, but I hope in a few people I evoked that innate childhood curiosity to investigate what is pure, beautiful and interesting in the world around us.”