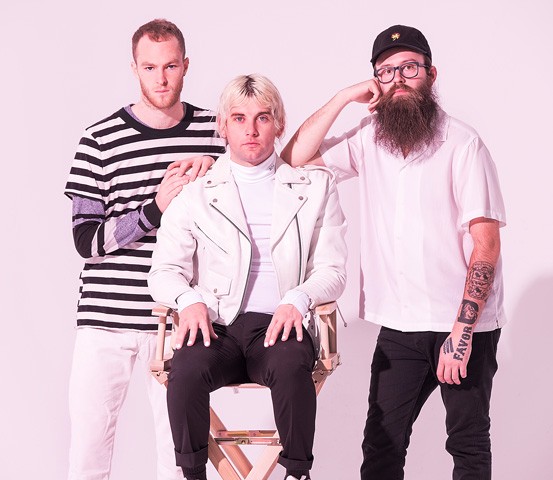 There was a point in time when Judah & the Lion pictured itself as a standard folk-rock band. The Nashville-based trio’s earlier work sounds like something that would fit well as an opener on a bill with Mumford & Sons or Alabama Shakes.

It is not as if either of those pairings would suddenly be surprising today, but the first time banjoist Nate Zuercher heard a producer couple one of their existing songs with synthesized hip-hop bass, he wondered where exactly the band would fit on the music spectrum in the future.

“I remember personally being really uncomfortable like, ‘No, that’s a terrible idea. Why would we ever do that? That’s not who we are,’” Zuercher said. “But he was like, ‘Just trust me; try it.’”

Adding a distinct hip-hop flavor to its mandolin- and banjo-led folk pop sound (including rap verses from vocalist, guitarist and band founder Judah Akers), Judah & the Lion released its album Folk Hop n’ Roll in March 2016. The band returned to the studio after the release to further explore its hip-hop influence, adding several new songs and switching up the track order for Folk Hop n’ Roll (Deluxe), released March 2017. Many will recognize the upbeat, festival-friendly single “Take It All Back,” which is certified gold by Recording Industry Association of America.

The decision to experiment with electronic and hip-hop sounds was one that might have puzzled Zuercher at first, but the banjoist told Oklahoma Gazette that he tries to keep open to new ideas. Judah & the Lion’s bandmates come from a wide variety of musical backgrounds and upbringings, and the result is an eclectic blend of tastes and a musical identity that has shown a tendency to evolve over time.

“You have to kind of have that ability to take that leap, like, ‘I don’t really know about this, but I trust you,’” he said.

Before Zuercher ever picked up a banjo, got his first tattoo or grew his long, brown beard, he was growing up in an orchestra household as the son of a pianist and trumpet player for Colorado Springs Philharmonic. Classical music was everywhere around him all the time, whether he wanted it to be or not.

Naturally, he sought to latch onto something that was the opposite of his upbringing. In late elementary school and early middle school, Zuercher began to fall for punk and metal music.

“I saw School of Rock when I was in sixth grade,” he said. “That’s when I kind of started playing guitar.”

The guitar was the first instrument Zuercher loved, and he invested a lot of time into getting better at it. He also got into skater culture and was a loyal fan of the Tony Hawk video game series. He would hang out at local skate parks, where he got constant exposure to different subgenres of punk rock.

As he got older, he saw another shift in his interests. He joined the high school jazz band and began studying bluegrass music on his own time.

“In my mind, [bluegrass] is very similar to metal music,” he said. “That’s why I love it. It’s very rhythmic, the way I think about both of those.”

Zuercher got a banjo as a high school graduation present. He went to Nashville’s Belmont University to study music. As a sophomore there, he met and befriended future Judah & the Lion mandolin player Brian Macdonald at the many jam circles that would form around the city and college campus.

The two had been hanging out together for about six months when Zuercher got a call from Akers, asking him to record banjo on some songs he was working on for a solo project.

Akers and Zuercher had hardly ever spoken to each other before that call, but they were not exactly strangers either.

“I knew who he was because he was kind of an all-star baseball jock at Belmont,” Zuercher said. “And he knew who I was because I was the big, bearded, banjo-playing guy on campus. So we were both somewhat familiar with who we were but hadn’t actually spent time together.”

Akers told Zuercher he also needed a mandolin player, so Zuercher invited Macdonald to join them as well. (They were also joined by drummer Spencer Cross, a founding member of Judah & the Lion who, in December, announced he was leaving the band because of travel demands.)

The banjoist said he was in disbelief by how natural — and good — those recording sessions were.

“Sometimes people say you’ll know when you meet your spouse,” he said. “You just kind of know, and that’s how this felt.”

After the planned recording sessions were over, Zuercher called Akers back to tell him how get he thought they sounded together. It would be madness, he said, if they stopped playing now. Akers said he felt the same way, and the group of players cemented the band that would challenge genre convention in the years to come.

Folk Hop n’ Roll and its later deluxe reissue were produced by Dave Cobb, who also produced the band’s less synthy Kids These Days in 2014. Cobb won a 2015 Grammy for Producer of the Year for his work on Chris Stapleton’s Traveller (which won Best Country Album) and Jason Isbell’s Something More Than Free (Best Americana Album).

Judah & the Lion felt it was necessary to return to Folk Hop n’ Roll and add songs that more eloquently captured the hip-hop influence they envisioned for the album in the first place. The album’s deluxe version features new tunes like “Suit and Jacket” and “Going to Mars,” which fit more of a space feel than a radio-friendly dance aesthetic — perhaps more in the vein of Sturgill Simpson’s alt-country gem A Sailor’s Guide to Earth.

“I think it’s more of what feels like our sound,” Zuercher said, “but I also would say there’s all kinds of possibilities that we may not even know about.”

Will hip-hop and electronic influences continue as part of Judah & the Lion’s sound in the future, or will Folk Hop n’ Roll stand as a distinct era in the band’s history? The short answer, it appears, is that no one really knows for sure yet.

Zuercher said the new direction has undoubtedly become a part of who they are, but the band reserves the right to continue evolving in the future.

“We really like it, and I think we enjoy incorporating that,” he said, “but also we want to have the roots of where we started and we’re adamant about recording that too without worrying about what that looks like.”

Zuercher enjoys being in a band that is flexible and open to new ideas, though that admittedly can make his work more complicated.

“If we were a bluegrass band and we were always going to put out bluegrass records, it would be a little less strenuous,” he said.

Like any group of people, Judah & the Lion is not in full agreement on everything all the time. Some directions are taken as a compromise or in faith of other bandmates. The constant give-and-take has its pros and cons, but Zuercher has seen firsthand how the process can elevate the unit.

“I think when we record, there’s always a little bit of tension as far as wanting to be progressive and trying these new things,” he said. “It’s exciting, but it’s not so easy to always get on board with.”