A partnership with Provision Kitchen and Hal Smith Restaurants turns Organic Squeeze into a one-stop shop with grab-and-go food options. 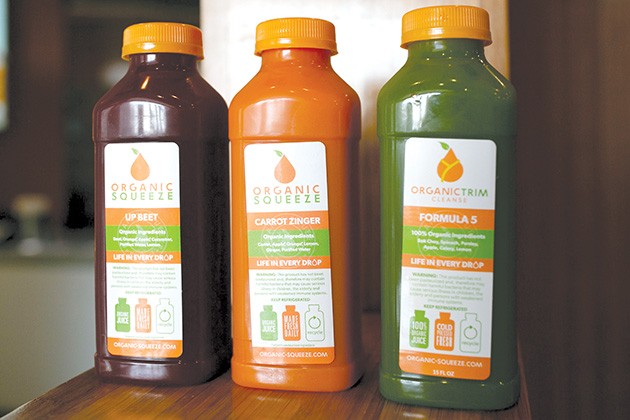 For years, Organic Squeeze and Provision Kitchen operated as friendly businesses separated by the parking lot at Nichols Hills Plaza.

Now, with the help of Hal Smith Restaurants (HSR), the three Oklahoma-based businesses are combining forces to make Organic Squeeze a one-stop shop for healthy options in their home state.

Provision Kitchen founder Whitney McClendon closed its brick-and-mortar location in early 2019 and has partnered with Robert Rhodes of Organic Squeeze to build a commercial kitchen in Edmond that stocks grab-and-go options at the original Organic Squeeze in Nichols Hills, 6436 Avondale Drive, as well as a new location in Norman, 3770 W. Robinson St., Suite 100, which was facilitated by HSR.

The triumvirate began as a duo partnership about two years ago when Tracy Smith, HSR’s project design administrator and daughter of founder Hal Smith, wanted to introduce a healthy concept to HSR’s portfolio of concepts in her hometown of Norman.

“For years, my dad and I went back and forth and he didn’t know if Norman was ready for it,” Smith said. “Finally, once I got introduced to Robert and brought my dad up here, we really just wanted to back him and expand Organic Squeeze. Once we met Whitney, it was the perfect fit. I knew it was going to be a success.”

As HSR and Organic Squeeze began drawing plans, there was something missing from Rhodes’ comfort zone: more substantial food options beyond smoothies and cold-pressed juices.

“People would come into [Provision Kitchen] and say, ‘I wish you had frozen yogurt or made smoothies,’ and we’d tell them to go over there,” McClendon said. “[Organic Squeeze would] send people over to us when looking for similar quality. … Robert had dipped his toes in [food preparation] before and didn’t like it. They came over in December to try stuff. It just so happened that behind the scenes, we had opportunity to get out of our brick-and-mortar, and I thought it would be perfect.”

McClendon was able to get out of the lease at 6443 Avondale Drive as Balliet’s made the move out of Classen Curve and was looking for a new space. While closing Provision Kitchen’s physical location meant losing its signature salad bar and hot food, McClendon was excited to revamp its grab-and-go section with higher quality ingredients without raising prices thanks to HSR’s bulk pricing on goods.

She is proud to serve all organic, soy-free, dairy-free and pasture-raised chicken and beef or wild-caught fish in Provision Kitchen’s grab-and-go section available by the front counter at every Organic Squeeze.

“Every successful juice bar has food and snack options,” Rhodes said. “Whitney does phenomenal quality food and snacks, and when we added that component to Organic Squeeze, we were able to be that one-stop shop.”

Rhodes founded Organic Squeeze in 2013 with cold-pressed juices and fresh smoothies designed to optimize nutrient absorption. The 5,500 square-foot commercial kitchen that Organic Squeeze and Provision Kitchen partnered to undertake operates as a centralized kitchen to ensure consistency by keeping its production facility at 40 degrees Fahrenheit.

Organic Squeeze manufactures its smoothie packs and its cold-pressed juice production at the facility. Rhodes said each bottle of juice has about 2 1/2 to three pounds of fruits and vegetables. Cold-pressing differs from bottled juice found at the grocery store because most of it goes through high-pressure pasteurization, which provides a longer shelf life but removes a lot of the nutrients.

“You couldn’t sit there and chew that much produce,” Rhodes said. “The biggest difference between a bottle of juice you find at the grocery store and fresh-pressed is that you have living enzymes and it’s the key to living a heather lifestyle.”

The centralized kitchen allows consistency products to be shipped to Nichols Hills and Norman locations, but it is strategically placed for future expansion based around a 300-mile radius.

“We’re already looking at other sites,” Smith said. “We want to expand all across Oklahoma.” 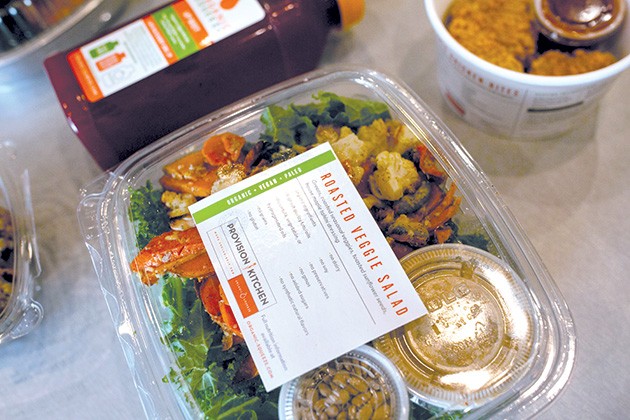 In the grab-and-go cooler, Provision Kitchen offers vegan salads that have an option of adding pasture-raised, organic chicken. There are also composed meals like braised chicken in tomato sauce with root vegetable mash and sautéed spinach, soups and grass-fed beef chili. For snacks, it offers peanut butter balls made with all-natural ingredients, vegan almond bars and sprouted almonds. They also have organic chicken bites that are coated in plantain chips and coconut oil for a guilt-free version of a chicken nugget.

The process of soaking almonds in water activates its sprouting process that breaks down proteins that inhibit nutrients, McClendon said.

“A Green Green juice with sprouted almonds is a great snack,” she said. “They’re really crispy and delicious, and people love them. They’re coated in pink Himalayan salt, which has 87 vitamins and nutrients, stuff that we’re deprived of.”

McClendon and Rhodes monitor health food trends, which is an ever-changing science, but are committed to providing the best quality ingredients, including Oklahoma produce as much as possible. They don’t use any processed or hydrogenated oils like vegetable oil, which was long thought to be a healthy option because it reduces cholesterol but actually promotes internal inflammation because of its high linoleic acid content.

Organic Squeeze also offers cleanse programs that can be juice-only or include food and snacks. Clients can choose options for up to five days per week, and a day’s worth of food ranges from $55 to $60 per day. Clients can order packages online and pick them up in the store on Mondays and Wednesdays.

“I believe in a balance, if it’s sourced correctly,” McClendon said. “If you’re eating grain and soy [fed animals], it’s horrible for you, but if it’s sourced correctly, it is a tremendous source of nutrients. It’s about a balance. If you’re following a certain diet and you’re frustrated because you can’t find places that offer that, we have a solution. If you want healthy, delicious food, you can pick anything off the shelf.”