The walls are still red after 43 years.

“I made a solemn promise to Genell that I would never alter the decor or anything of the restaurant,” said Junior’s owner Jim Shumsky.

He has updated the restaurant, located in the basement of the west Oil Center building, 2601 Northwest Expressway. The classic supper club needed new carpet, and Shumsky oversaw the replacement of kitchen equipment and repairs throughout.

But he’s holding fast to the promise he made when he bought the place from Genell Simon in January 2004.

“The general theme and the color has remained the same,” he said. “It won’t ever change so long as I’m alive and own it.”

Junior’s was started by the eponymous Junior Simon, who managed The Habana Club in Oklahoma City before opening his own restaurant in 1973.

The eatery was the first tenant in the Oil Center and quickly became a beloved hot spot for oilmen who worked in the building.

“People congregated here. They made a lot of oil deals here between 1973 and 1984, before Penn Square Bank closed,” Shumsky said. “People came in here the day it closed who had lost millions of dollars.”

Junior’s struggled through the 1980s, as did the rest of Oklahoma after the oil boom went bust, but the greatest challenge came in 1984 after Junior Simon died. His wife kept it going and eventually saw the business rejuvenated with the return of the oil industry in the 1990s.

But by the early 2000s, she was looking for new owners to take over. One person she approached was Shumsky.

“I was a regular customer who entertained my clients here,” he said.

As an employee of pharmaceutical giant Pfizer for almost 40 years, he brought many people to Junior’s to do business. Simon wanted him to put together an investment group to buy the restaurant.

“She was getting on in age, and they wanted to get rid of it,” he said. “The people I had lined up to partner up with me backed out. But I made an agreement to buy the restaurant myself.”

He had been a customer there since nearly the beginning. Drawn in by the dimly lit supper club with great food and service, Shumsky said there was some mystique to Junior’s that he couldn’t resist.

“It was a most accommodating place,” he said. “There’s something about tableside Caesar salad and the way they served a good drink. They didn’t fudge any on the amount of whiskey they put in a glass.”

The late 1970s were a fun time, and Shumsky said for Oklahoma City, Junior’s is really all that’s left.

“Junior’s is just Junior’s,” he said.

Twelve years after buying it, Shumsky is still a regular. That’s key to running a successful restaurant.

“You have to like it to be successful. You have to be here,” he said.

Most nights, diners will find Shumsky greeting guests and giving newcomers a rundown of the iconic restaurant’s history.

“People seem to appreciate it,” he said. “They know they’re in someplace special.”

The restaurant continues to draw in new generations of customers, perhaps intrigued with Junior’s Mad Men-like style and cigar-friendly bar.

Shumsky said he thinks the restaurant is still one of the top steakhouses in Oklahoma City.

“We don’t brag about it; we just take care of the customers that come through the door,” he said.

Shumsky said Junior’s was the first restaurant in the city to add the showy starter to its menu.

“If they’re steak people, I’d recommend the 8-ounce filet,” he said. “You can cut it with a fork.”

For seafood lovers, he recommends the imported Australian cold-water lobster tails or the king crab legs from Alaska. He said the surf and turf, pairing a 6-ounce filet with a 10-ounce lobster tail, is a decadent, filling meal. 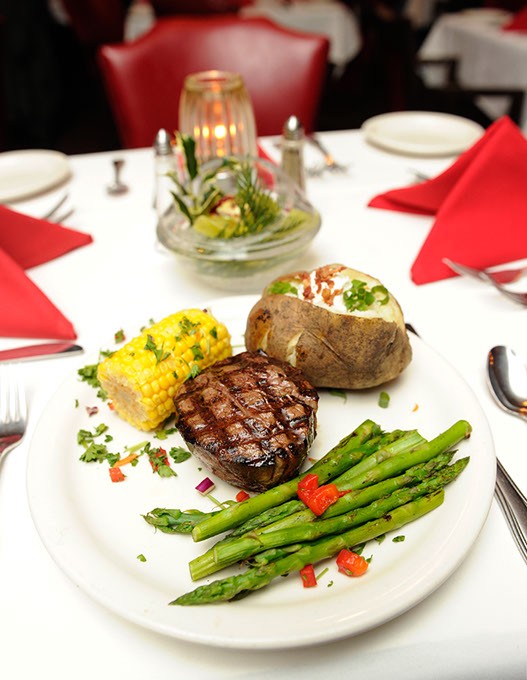 As much as he loves the food, Shumsky is a bigger fan of the bar, where he can often be found relaxing with a glass of scotch and a cigar and talking with friends.

“We’ve had some really talented people who have played here,” he said.

Junior’s is one of the oldest piano bars in the city, hosting Oklahoma Jazz Hall of Fame member Justin Echols Wednesday evenings and blues singer and guitarist Steve Coleman every Thursday-Saturday.

It doesn’t hurt that the bar staff are also expert cocktail makers concocting recipes like a Brandy Ice dessert that is one of the restaurant’s most popular drinks.

“We make that fresh each and every day,” Shumsky said.

The blend of brandy, cacao, ice cream and nutmeg is like a smooth, alcoholic milkshake that’s big enough to share.

“We go through an awful lot of that each week,” he said.

Brandy Ice, like the red walls and the jazz music coming from the bar, will last another 43 years without changing if Shumsky has his way.