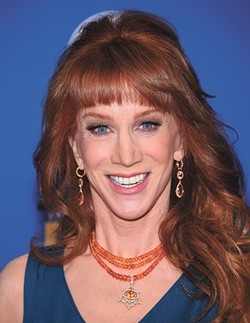 Kathy Griffin has multiple awards to show for her hard work in show business. These include two Emmys, a Grammy and a Guinness World Record for starring in more comedy specials than any other comedian. No longer considering herself to be on the “D-list” of celebrities, she now refers to herself as a “list jumper.”

“I might have an A-list moment where I’m asked to present a Lifetime Achievement Award at the Directors Guild of America awards,” Griffin said. “There’s an event where I was seated near Leonard DiCaprio and Matt Damon. The very next day, I’ll be at an airport and somebody will say, ‘Hi, Reba!’ That’s why I say I’m a list jumper.”

Yet jumping from list to list is how Griffin finds her source material. Raised in a large, Irish Catholic Chicago family headed by her mother — “96 years old, still going strong with her boxed wine” — she is known for being unpredictable and unfiltered. Audiences should expect the unexpected when seeing her perform 9 p.m. Friday at WinStar World Casino and Resort in Thackerville.

“The reason I’m coming to Thackerville again — and the reason I tour so much — is I’m 56 years old,” Griffin said. “I’ve been touring now for decades. What I love to do, and my fans and the people who buy tickets know, is every time you come to see me, they’re going to see all different material.”

‘We got the air mattress’

Growing up in Chicago, she and her family attended Second City performances. When she moved to Los Angeles in her late teens, she finally found the familiarity of improvisational comedy as both a member and full-time instructor with The Groundlings.

While there, she made friends with future Saturday Night Live cast members such as Molly Shannon, Ana Gasteyer and “the amazing, dear departed Phil Hartman.”

One of her students, Will Ferrell, lived in his mother’s basement with his brother while studying with The Groundlings.

“To this day, when I see Will, I’m like ‘So. You guys in the basement?’ He’s like, ‘Yeah; we got the air mattress,’” Griffin said of Ferrell.

Griffin’s jump from improv to television includes the NBC sitcom Suddenly Susan, Bravo’s Kathy Griffin: My Life on the D-List and her HBO specials.

However, Griffin’s unfiltered persona is in many cases too dangerous for daytime television. Griffin said that with most shows, “banned” list status is usually temporary. Yet the only banned status that is close to being permanent is Live Kelly, going back to a time when she guest hosted with former host Regis Philbin and made a joke about the executive producer, Michael Gelman.

“I made a joke on the air that Gelman was Regis’ bitch. I’m not kidding — I haven’t been back since then. I said to Regis, ‘Did I offend you?’ He said, ‘No! What do I care? That’s hilarious! Gelman was my bitch.’”

Talking about celebrities is a major part of Griffin’s act, in many cases because of pure Hollywood circumstance. Kim and Kanye Kardashian West are her neighbors.

“My act basically moved in next door,” Griffin said.

Griffin finds herself in many unimagined situations, such as having to be at an event with Liza Minelli and Donald Trump years ago. Griffin has been a part of many events with Trump over the years and said “the guy shows up to the opening of an envelope.”

“He’s a guy who is not very bright,” Griffin said, summing up our new president. “He’s very myopic. Everything’s black or white. There’s no nuance. There’s no shading. As a subject for a comedian, obviously, he’s a dream with the misspellings, the tweets, the crazy tweets. My joke is — as a citizen, he’s horrible. But as a comic, he’s great.”

While Bravo and HBO might play a significant role in her career, hosting New Year’s Eve Live with Anderson Cooper — or as Griffin calls him “Anderson Cooper Vanderbilt” — definitely expanded her fan base. This past New Year’s, Griffin wrapped Cooper in tinfoil to celebrate their tenth anniversary on air. However, Griffin has, in the past, wrapped herself for only Cooper’s viewing.

“Here’s what he does, because he’s such a stiff. He ignored the first three, and then I wouldn’t stop. Then I started sending pictures of myself naked on the floor like I had died there. Finally he texts me back and he says, ‘Hey, everything OK over there?’ I love doing that to him. I pride myself that he’s the only man I’ve ever sexted. I know that he doesn’t care and he’s never going to release the photos.”

“I didn’t know what the word was,” she said. “Sure enough, I go out there and said ‘Kristin Chenoweth told me to say something.’ It was the funniest thing. I didn’t say it that loud. It was a wall of sound — ‘Soooooonnnnerrrr!’ It was hilarious.”